Insofar as I have a typical day it starts late. This is not laziness. I’m rarely at my desk before 11:00am and start with coffee and emails, moving on to other admin tasks which I like to clear out of the way before lunch. In the afternoon, if I’m drafting, I put on the headphones, select whatever is the soundtrack to my current work and hit the keys. A four hour session (as long as I don’t get sidetracked by on the spot research) can produce a couple of thousand words. Editing requires silence and a note on the door promising horrible death to anyone who interrupts. Tea and cake follows, along with an hour watching something on television. Then a few more hours at the keyboard if I’m mid-project. Otherwise I find a chair and read until about one or two in the morning.

As a writer yourself, what do you look for in the work of others?

As a writer, I’m always trying to produce something that is both engaging in terms of storyline and character as well as being thoughtful. Pure entertainment is fine (if such a thing exists), but the seasoning in any writing is the engagement with topics of universal interest.

Finishing my current series (I’m working on book 6 of eight – although there are a couple of side stories emerging in my head) and developing some other ideas.

I had three I never missed (did I just admit to bunking off?). English, especially at A Level as I had such a wonderful teacher who brought everything to life; Art for the same reason – a teacher who seemingly did nothing yet managed to bring out the best you had to offer; and Drama (which I went on to teach). Art and Drama (nearly fifty years later) continue to feed into my work from both a theoretical and practical standpoint.

What surprises you about your job that you didn’t expect?

It doesn’t surprise me so much these days as I am now used to it, but when I started in the ’60s, I could not believe how helpful and patient most established writers of all types were willing to be for a beginner like myself. In that respect Mike Moorcock and the late Barry Bayley were always helpful and I had a long if intermittent correspondence with Samuel Beckett. It is something I always try to do now, paying forward all the help and kindness I have received.

Sitting in a room surrounded by thousands of my favourites, I’m not sure where to begin, or even if I can. And I know my answer would be different tomorrow. Right now, five stand out books are:
The Besieged City by Clarice Lispector
Ice by Anna Kavan
The Bloody Chamber by Angela Carter
Roadside Picnic by Arkady and Boris Strugatsky
The Atrocity Exhibition by J G Ballard

Coffee – my own blend of Javan and Colombian.

Which author, living or dead, would you like to write your biography

Well M John Harrison would capture the weirdness well, and Mick Farren would probably understand the festival going on inside my head; Colette would portray the dichotomy of onstage/backstage well, and Terry Pratchett would make sure the fun wasn’t forgotten. In the end, though, Georges Simenon would be able to capture the whole thing with exquisite economy (because sitting at a keyboard all day is inherently boring to an outsider and probably not worth more than 120 pages). 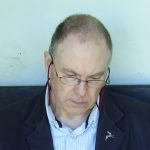 Graeme K Talboys was born in Hammersmith. He now lives in Scotland. The route between the two was labyrinthine. He stacked shelves, swept factory floors, maintained gardens, and taught in schools and museums before becoming a full-time writer. To date he has had seventeen books published (seven novels, a short story collection, a poetry collection, and eight works of non-fiction). Other writing projects are in various stages of completion.