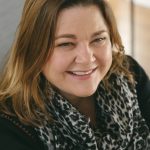 Harriet Tyce was born and grew up in Edinburgh. She graduated from the University of Oxford in 1994 with a degree in English Literature before gaining legal qualifications. She worked as a criminal barrister for ten years, leaving after the birth of her first child. She completed an MA in Creative Writing – Crime Fiction at UEA where she wrote Blood Orange, which is her first novel.