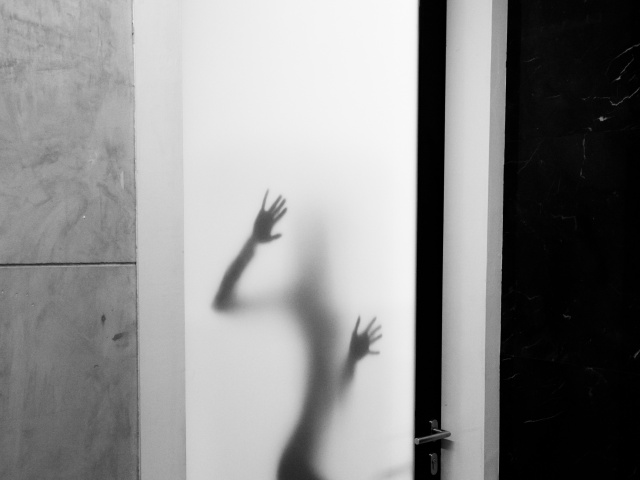 There’s a girl in my bathroom and I don’t know why she’s there. She sits in the corner, her back pressed to the cold white tiles, and she watches me. Sometimes I think she has been crying and her hair hangs limp across her face and there is an almost imperceptible catch in her breath.

The first time I saw her I said, ‘Excuse me but I need to pee’. It was early in the morning and my memory is always a little uncertain then and thoughts swim about like fearful fish in my head. Maybe she was someone from the night before, I thought, and so her being in my bathroom was not unlikely or a surprise.

She shrugged when I said that about needing a pee and so I just peed with her watching. Or maybe she looked away, I don’t really know. Because she does not speak, I have given her a name. I have called her Ariela, for no reason except I like the name. And Ariela does not seem to mind.

I washed, and brushed my teeth, and she watched all that too. And I said sorry but I was late, which I was, and so could she let herself out. I said she should help herself to tea or coffee first, if she liked, though I was out of milk. I said I’d call her sometime, though I was pretty sure I did not have her number.

‘Just pull the front door to after you.’

The day that followed was the same as a hundred other days with nothing to mark it out from the rest. No one said anything about how tired I looked, or passed remark about my shirt needing ironed or my socks being different colours. Days can be like that.

I stopped in at the Hideout Café on Queen Charlotte Street before going home, and I ordered coffee and pie. The girl behind the counter didn’t even ask if I wanted cream with the pie, just handed me the bill and looked right past me. She had her name written on a badge pinned to her apron, but the name was smudged so I couldn’t really make it out.

She didn’t look up when later I said goodbye.

Ariela was still there in the bathroom when I got back home, and still not speaking a word. I sucked in air and blew it out again. And I ran my fingers through my hair and made a noise somewhere in the back of my throat, a noise to show that this was a puzzle indeed.

I said she should come through to the kitchen and if she wanted I’d fix her something to eat. I was sure there was bread in the bread-bin and butter in the fridge and sliced meat in a packet, or cheese. She shook her head and stayed where she was. I asked her if she wanted a drink. She did not answer so I made her a cup of tea, milk and no sugar, and I sat on the floor just inside the door and I talked till the light went out of the sky and I could no longer see Ariela’s face.

She’s been there almost a month now and she doesn’t look like going anywhere. I fetch her cups of tea and plates of sandwiches and I leave them on the edge of the bath. She does not even show that she’s aware. I tell her that I have work to go to, and that she can stay or leave as she pleases. I ask her to lock the door if she’s going out and I say what time I will be back.

Ariela nods and that’s all.

Each day it is the same and Ariela has eaten the sandwiches and finished the tea by the time I come home again. I don’t know if she drinks the tea as soon as I’m gone and it’s still hot, or if she waits and drinks it cold or creeps through to the microwave to reheat it. I take her in more tea when I return to the house and I sit on the toilet and talk to her – which is like talking to myself, but better. I tell her things about my day, or if there’s nothing to say I read her stories from the newspaper.

‘So, there’s this girl and she’s a dancer and a student from Russia and she’s gone missing and her mother and her father are worried and so are her friends and they’ve put her picture on the news and stuck it up on noticeboards all over the city.’

Ariela watches me wash my face, and wipe under my arms with a wet flannel, and she watches me brush my teeth, counting the brushstrokes so it is the same each night. When it gets dark outside and the streetlamps come up, well, I leave the light on in the bathroom and I leave it on all night.

It has got so that I like her being there, if I’m honest. I tell her goodnight and I say she’s very welcome to come through and sleep in the bed – I’ll take the sofa, I suggest so she doesn’t think I’m being fresh. She shakes her head and stays just where she is.

In the morning, every morning, I have to pee again and I don’t even ask now. It’s funny how quickly you get used to things. I shave with her there and I ask her what she wants on her sandwiches today. Ariela makes no answer. I give her cheese and tomato – you can’t go far wrong with cheese and tomato. And I decide to stir a spoonful of sugar into her tea one morning even though she hasn’t complained.

Then I dress and leave for work, that’s what I tell her, and I say again about pulling the door shut after her if she goes out and I say we need milk and cheese and I leave money on the small table by the front door, just in case.

The doctor makes a note in his book. There’s a doctor because today it is Friday and there’s always a doctor on a Friday. He writes down some small detail that’s new in the story, something I have added or changed and that he has noticed. He asks me if I know what it means, the money on the table by the door. I shrug and say, ‘Beats me,’ and I say nothing more. He asks if I need to renew my medication prescription, which I do, and he makes an appointment for the same time next week and checks that’s ok with me.

I look at him funny, wanting him to tell me what it means.

The doctor nods and smiles, and he makes another note in his book. I can see that he does not believe me and I don’t blame him for that. The missing dancer’s name is Yulia Solodyankina and she’s from Moscow and she’s pretty as pinch me so I’m not dreaming.

After I leave the doctor’s office, I go back to the Hideout Café for coffee and pie. It’s a routine now, but still the girl serving does not look at me or show in any other way that she recognizes me, and still I can’t read her name written on the badge pinned to her apron. I sit alone in the same seat by the window, same as always, and I think about things, the real and the imagined, and it doesn’t make any sense, leastways not so that I understand.

Of course, there isn’t really a girl in my bathroom, not for all this time. Maybe there was once. It’s a coat that’s hanging beside the bath and which I do not move. A girl’s coat, at least. All the rest is just pretend, or sickness, or loneliness. I don’t go to work either, but walk about the city, and I take myself off to the park each day, come rain or shine or all weathers, sitting on a bench there. The bench has a polished brass plaque screwed to the back. On the plaque there’s a name and a date and it says, ‘In Loving Memory’. I sit there and look up at the sky, counting how many birds there are in an hour so that I have something to tell Ariela.

Today there were twenty-one birds, and the girl at the Hideout Café has changed the way she wears her hair, and I have bought cucumber for Ariela’s sandwiches just for a change. I read in the newspaper that they’ve widened the search for Yulia. On a noticeboard at the entrance to the park there’s a picture of her – pretty like I say – and an appeal for information from her friends, and a telephone number to ring. I have the phone number committed to memory just in case I see her. It’s the same picture in the newspaper, the same one as on the noticeboard, only in the newspaper Yulia’s in colour.

Yulia looks like someone I once knew, more and more she does, but maybe that’s just a feeling I get having stopped to look at her picture so often. She’s young and dancing, her arms held out from her sides and her hair all flick and wisp and flying all ways, and she does not look at the camera, though the camera looks at her.

And with her friends wanting just to know that she’s safe, I worry for her, worry for a lost girl called Yulia who is just a picture on a wall to me, and now a picture in a newspaper. And I worry, too, for Ariela who is a different sort of lost, and I count the days until it’s Friday again, counting them out in plastic coffee spoons, and like that I know it’s six days before I can see the doctor once more. 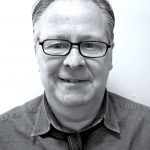 Douglas Bruton has been published in many nice places, including Northwords Now, New Writing Scotland, The Delinquent, The Vestal Review, Storyglossia, Interpreter’s House, Flash Magazine, The Irish Literary Review, Fiction Attic Press, and in ‘Umbrellas of Edinburgh’ an anthology by Freight Books, and most recently by The Fiction Desk. His first novel for adults, ‘Mrs Winchester’s Gun Club’, will be published on 28th February 2019.