Gold flock. A little boy sleeping on a rock. Henry turns towards another wall, presses his knuckles hard into the armrests of his chair. The Hotel Grande in Rimini, no? But where has the view gone? The flashes of sparkling blue? Henry hoists himself up to standing. The sweets. Boiled fruits in cut-glass bowls. Sways like a plank in freefall in the middle of the room. Wrapped up like tiny white parcels. Swings a first leg outwards with barely a rub to the hip. Disappointingly soft inside. Raises one foot above the parquet floor, drops it, raises the other. Forward march. Scuffle-pat. Goodbye room.

Henry is standing before a brass chain across a door, a circle of blistered glass. And at his feet, a welcome mat, a thick, brown envelope. Not flimsy blue, Par Avion, like Mummy’s when they came. Split open, wafer-thin, on Sunday afternoons with matron’s steely blade. Whatever happened to the conservatory? Henry cocks his head and twists at the waist. Ah. That-a-way. Over the rug, towards the casement windows and beyond to a square of luminescent lawn. To Dorothy, trowel in red-gloved hand, translucent against the greenery, smiling her buck toothed smile. Hedge trimmer, rose breeder, dog walker. Never did pup. Dorothy. Gone. Who put those there? Purple-yellow things. Pansies!

Round the walls. Biscuit on the mantelpiece. Ginger Cream. Gold clock. Tick tock. Bookcase. National Geographic. Derbyshire. Marvelous. Now. We have a door frame. Kitchen. Box of Trill on yellow counter top, seeds seeping out. Or mouse droppings. Naughty fellows. Whack ’em with a broom. That’s the stuff. Ha. Three blind mice. Two white hands, Henry’s hands, gnarly on the cold sink rim. See how they run. There’s a sponge on the window ledge and the world outside. Jagged paving. Tusk white, elephant grey. To Henry’s gate. Reverse. A little more. And a little more. The kitchen chair. Bones sink into split red leatherette. White piping. Fingers press, against the chilly tabletop. And look here, some cheese. To the lips. What’s that? A key in the door, stiff bristles scraping over carpet.

Ah. The big one. Henry starts to rise. Cascading cheese.

‘There’s a letter come for you. I’ll leave it here on the side. Brought a little friend with me today, Henry. We’ve got Lily on work experience, come to help us with your lunch. How do you like that?’

‘Very good.’ Henry gives a watery salute and drops back onto the chair.

‘Here she is.’ Lily on work experience takes shape in the doorway. A little red haired thing. Gracious. Freckles everywhere. Joining at the nose. Lips as pretty as a rosebud.

‘How are we today, then, Henry?’ Mary, Mary, in her striped blue pinafore. Giant buttons at the side. ‘Everything alright?’ She leans across him, jowl and wedge of nostril, sweeping crumbs from the table into her big puffy hand. ‘What’s this here on the floor?’ She’s bending down. Women forever bending down for a pile of leaves, a rack of scones. And where’s she gone, the little thing? Ah, there she is, taking off her whatsit. ‘Lily’s going to have a go around the place while we have a nice wash down.’

‘I think we do, Henry. I think we’re a bit whiffy, don’t you? There’s cream cleanser under the sink, there, Lily. Up we come!’ Mary has him by the armpits and onto his feet. ‘Where’s your walking frame gone?’ Henry leans forward, as if into a cross wind, pointing a crooked finger at somewhere. ‘What’s it doing over there? Silly sausage.’

Henry is in the white plastic chair and Mary is peeling away his socks, this one, now the other, unzipping his trousers, sliding them away, tearing off his paper pants. She’s pointing the nozzle over the tiles, checking the water till it runs warm and fills the room with steam. And here it comes like tropical rain. Henry succumbs, watches it streak down over the thin folds of his belly, onto the squelch of genital flesh, and the flannel strikes hot across his shoulders. Elephants and Leaping monkeys.

Henry is strong-backed, handsome, after-rugby fresh. Like a new day, like kicked up winter earth all washed away and the promise of beer. Like the promise of a drive down to Henley later with What’s-her-name, the windows down and Henry’s foot on the gas. Talking nonsense and rubbing knees in the tearoom, licking cream from their lips. What became of her? Married that engineering chap and moved to Bedfordshire. Liked a man with a good brain. Didn’t she laugh at Henry once? A little sneer. Ah, but she never saw him in the scrum.

‘Let’s get a comb through that, shall we? Make you nice for when Stephen comes.’

‘Your nephew, Henry. Who had the dish put on the roof for you?’

Dishes and wishes. Henry is upstanding, knees just bent, arms afloat and Mary is zipping him in and buttoning down his long white shirt.

‘Stephen’s fetching you later, for tea, remember? For the little one’s birthday.’

‘Ah, little ones. Need to. I shall… more biscuits.’

‘You’re going there. Stephen will be round at half-past three to take you. He’s got his key.’ Mary is moving round him, mowing his cheeks back and forth with the electric razor. ‘Shall we put your teeth in? No? Later then. For the party. There we go, all nice.’ She is heaving him up, buffeting him across the hall with her great, pillowy bosom.

‘No. Keep going. That’s just the stairs. Nothing up there now. We moved you all down. Remember?’

Into the sunny room, and Henry is lowered into the reclining chair, folding gentle as double cream.

The girl is in the kitchen in big yellow gloves. She’s wiping down the sink top, tucking a strand of hair behind her ear. Neat little bottom.

‘You’ve got the beef option, today, Henry! Happy with peas, are we?’

‘Won’t be too long, now. Put the cricket on, shall we? No? Well, I’ll leave it on, just in case you change your mind.’

The smack of willow bat on leather in Henry’s left ear and it’s pads on, ready to swipe. The sun is shining on Henry’s young boy neck and Mummy is there on the green with lemonade and sandwiches, half-watching, laughing with the girls in floaty dresses. And Neville is way out fielding. Older and taller, although Henry is the better batsman. But never worth the beating at lights out. Tell Matron, idiot. She won’t do a thing.

‘It’s a whopper, Henry! Lily’s bringing your pie now.’ Mary is tucking a yellow towel under Henry’s chin, spreading it over his front. The tinkling of cutlery, the fizz and glug of tonic water, and Lily is coming through with the brass rimmed tray. A steaming pie on a thick, white plate.

Lily lays it gently on Henry’s lap and his eyes go a-rambling over the girl’s white neck and creamy clavicles. But she’s not looking at him as she cuts deep into the pie.

‘A glass of Merlot?’

‘You don’t have any Merlot, Henry. Looks like you drank it all.’

Mary passes a forkful to his mouth. It’s warm and melting, travels down a treat. ‘Hock, then.’

‘None of that either.’

‘Haven’t you done well! Where’s all that pie gone? You won’t be wanting afters today then, will you?’

‘I said you won’t be wanting pudding, Henry!’

‘I expect there’ll be a slice of cake at Stephen’s later, mind.’

Rice pudding with a dollop of seedy jam.

Only if… Henry moves his lips. No sound. If the young lady here. He curls, unfurls a finger in his lap. Peels me. A tangerine.

‘What you smiling at? Silly old fella. What’s he smiling at, Lily?’

Lily. Silly. And Henry’s enjoying the pinkening of her ears.

Grapes, yes, grapes. One by one. And Lily’s in the kitchen, rustling, clinking, running taps.

‘There you go. I’m putting them just here for you, Henry.’

They are purple, the colour of fresh bruises. Cold between the fingers, cool and round on Henry’s tongue. Ah, but Lily’s slipped away.

‘Let’s turn you round before we go, shall we? Then you can see the flowers. He’s done a nice job on the borders for you, hasn’t he, old What’s his name? So you’re all done, now, Henry. You stay right there and Stephen will be here before you can say Jack Robinson.’

A rustle of nylon, a click of the latch.

Petals on the patio. The lawn is sliced into sunlight and shade and Henry is with Neville under the cherry tree at the bottom of their grandparents’ garden. They are cracking open stones with tiny silver hammers, the smell of fallen fruit fermenting in the dust, and Neville is frowning as usual. In the brightness behind them is Mummy whooping on Daddy’s knee beside a bed of marigolds. She never even heard Henry cry ouch when he bashed his thumb just now. Or ouch again when Neville stamped on his hand for good measure. Because Daddy has properly come home for good, and isn’t that grand? Though soon they will be gone. To live in hot places. But Henry and Neville will have wonderful times at Wratcham’s and they’ll all be together in the holidays.

It is later and Henry is not where he was. Voices and bodies. More windows. Outside, another garden.

‘Ah!’ Stephen, isn’t it? With the car and the seat belt. Who passed him his sticks.

Stephen pours and Henry watches the buttery fizz rising in his glass. He holds it steady enough and raises it to his lips. All his.

A white-haired child is driving a yellow truck across the carpet. He disappears at Henry’s feet, re-surfaces at his knees: two sticky hands, a dribbling chin. Eyes like marbles, Milky whites. Swap you those two for my Oxblood Shooter? Never!

A square array of chocolates and a voice that Henry knows. Warm, familiar, female. A wisp of hair, a wide, plush mouth. A pair of summer legs – not unlike Dorothy’s, rare to touch, that darted lean and brown across the courts at Bury Knowle.

‘That’s a Brazil nut, Uncle Henry. How about the caramel one?’

‘Ah, yes.’ Thumbs and fingers fumble, crinkle on molded plastic. ‘I shall just… if I may.’

A silky sweetness on the tongue and a blast of outdoors with the opening and closing of a sliding door. Silently, behind the glass, a child is running circles, chasing bubbles, on the grass. A last sliver of apricot light and Henry is back at Balliol, pulling a curtain across the squawk of ducks and blushing evening sky. Turning to fondle the perfect breasts of Joyce McPhee, to pass his earnest hands along those solid, quaking thighs. None of that girlish terror or mind your manners. None of that inward, scholarly-type fervor of other Oxford girls. Just Joyce’s tartan pleats that barely reached the knee. A squeeze of the heart, a last slick of caramel on the throat, somewhere a freckle. Joyce’s devilish dark eyes and honey-stockinged calves. 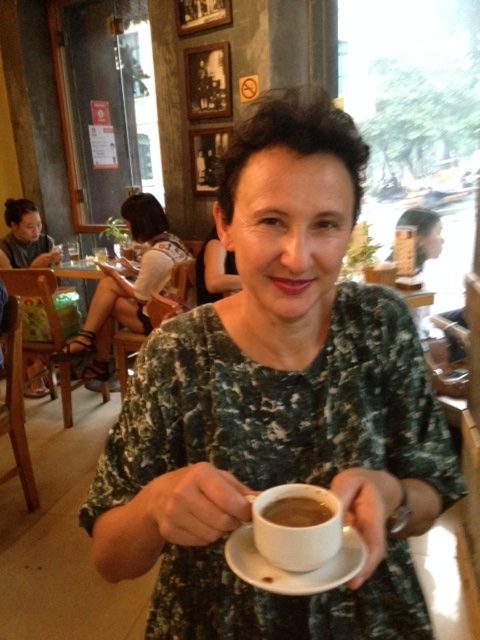 Stella is a dyslexia tutor and writing coach and lives with her very patient husband in their empty nest in South London. Over the years she has had the odd poem and prose piece printed or performed and her story New Materiality appeared in Issue 13 of the Mechanics Institute Review. Since completing the MA in Creative Writing at Birkbeck in 2016, she is seriously getting down to a collection of short stories. Afters is one of her 'slow flash fiction' pieces.