No Friends But the Mountains by Behrouz Boochani and translated by Dr Omid Tofighian, will be published by Picador in the UK in July 2019.

“I am frightened of freedom.” The stark realisation depicted in these five simple words, is some of the most powerful language used by Behrouz Boochani in his award-winning book, No Friend But the Mountains. In that one sentence Boochani, the brave and immensely talented Kurdish writer, journalist, poet and film producer, manages to capture the suffocation and shame I felt while reading this shattering piece of resistance, and the utter despair of the refugees imprisoned on Manus Island.

Behrouz Boochani has been unlawfully imprisoned having committed no crime, on the Papua-New Guinean island of Manus by the Australian government for more than six years. Having written about refugees living in the UK, I was keen to review the book, but felt it important that some of what I had to say had to come from his own words.

Through a variety of contacts, I managed to get hold of Boochani’s phone number. After days of trying and missing each other, we finally managed to speak. It was though with a certain amount of trepidation, that I made the call late on a rainy Sunday night in London on a crackly What’s App line.

In 2018 Boochani won one of Australia’s most important literary prizes, the Victorian Prize for Literature for No Friend But the Mountains. In his recorded acceptance speech, Boochani said “…that words still have the power to challenge inhumane systems and structures. I have always said that I believe in words and literature. Literature has the power to give us freedom.” I began by asking, that despite everything that had happened to him, if he still felt that was true?

“Yes, I think that literature has the power to give us freedom. I mean I’m not only talking about the refugees on Manus, but I am talking more generally that literature has this power. For example, Dostoevsky, when he came out of exile from Siberia, he published many articles and it had a big effect. Literature can be a truly independent language, it is the most independent and free language, and that is why we are able to challenge power structures through the language of literature.”

Part of the power of No Friend But the Mountains is the documentary-like way Boochani recounts in detail what it’s like to live incarcerated on Manus Island, a prison in the middle of the Pacific Ocean. In it, he traces his journey by boat from Indonesia, his detainment on Manus, his life, and those of his fellow prisoners. Shocking, full of despair and suffering, Boochani uses this treatise, written one What’s App text message at a time, over a five-year period, to depict the systematic and inhumane torture and conditions faced by the prisoners. What is even more powerful is that Boochani completed his book following a twenty-three day siege of the prison. I was intrigued to know how someone writes a book like this, in those conditions, on What’s App?

“You know, sometimes I couldn’t write for two weeks. At the same time I wrote articles, made a movie so I couldn’t write every day. Sometimes, when I could write, I’d write a page, sometimes five pages, sometimes two pages but I can not say I wrote something everything day. When I finished a chapter, I’d send it to Omid [Tofighian – translator] and he’d then message me and ask questions, the normal process between a translator and writer.”

No Friend But the Mountains is an attack on the senses, and for much of it I held my breath while reading. It is a book that shows in visceral terms the complete isolation and hopelessness faced by those imprisoned. The chapters are packed with streams of consciousness describing things such as the horrific sanitary conditions of the prison, the queuing system put in place for eating, the endless bureaucracy of the medical centre, and the way lives are controlled by simple things, such as turning the electricity generator on and off. It shows a world of cheating, lying and fixing the system for individual gain.

Yet Boochani has managed something unique in this book, which is to weave, not only the extreme horror of living in this state of imprisonment, but also his desires and dreams of his homeland, Kurdistan. Long scenes are broken up and littered with beautiful poetry that shows the often dreamlike state in which Boochani is living, a nightmare that he wishes he will wake from one day. Through poetry he brings to life the beauty of his previous life, depicting the countryside, people, folklore, myths and poets of Kurdistan such as Abdullah Goran and Kayla Ahmad. I asked him if he had always intended to use Kurdish folklore and memory in his book.

Drawing many similarities to Kafka and influenced by Beckett and Camus, Boochani uses Elisabeth Fiorenza’s feminist theory of Kyriarchy to show as Boochani says “that the prison’s greatest achievement might be the manipulation of feelings of hatred between one another.” This is not only Boochani’s attempt to show how one form of oppression intersects with another to break down prisoner resolve, it was also an attempt to differentiate this book from other empathy books about refugees. But giving the book an academic slant adds to its urgency, its purpose, its appeal for respect. I wanted to know why he decided to interweave the text with philosophical theory?

“First thing, this book is a piece of art. The reason I used the concept of prison is because that place is a prison. The government, the political structures always create their own language. For example, they call Manus the ‘OffShore Processing Centre’, so I have a question.  Which kind of processing is this place that they have kept us here for six years? If it is a Processing Centre, then they should process us to decide if we are refugees or not, then make a decision for us. And which kind of processing is that they are torturing people?  Always I have tried over the past six years to create a new language, a language that covers the reality and the truth and that is why I never use government language and always create my own language. We don’t have to use government language. We are not government, we are prisoners and of course it is a prison, and I call it a prison.”

Before we ended the call, I wanted to know what life was like today for Boochani and his fellow prisoners and what hopes he had for the future.

“Right now, refugees are waiting, because a bill was passed in the Australian government that forced the government to take the sick refugees to Australia to receive medical treatment. We will see many people in Manus go to Australia. This system is going to collapse and we can see that this prison will close in the near future.”

“I hope when this book comes out that we will have a big discussion and we will be able to expose this system and people around the world will know more about Manus. I will use these materials to do more academic research and I hope this book will make a picture for them, and I hope they can feel it through my writing.”

The conversation ended with a brief goodbye and a commitment to stay in touch. I felt like Boochani had more to say and when I put the phone down, I didn’t know what to think or say. After we spoke he sent me a What’s App message that read, “thank you for taking the time to tell our story.”

An Iranian refugee lived in our family home for the past year. He left the other day to start a new life. We did a small thing by helping one person, but the hopelessness of Boochani and his friends’ situation left me feeling empty. However, I couldn’t help but feel that Boochani’s story and that of the refugee who lived with us, while very different, were critical stories to tell, each complex, difficult and entirely relevant in their own right.

I can only share his hope that something good comes from the language of his art, and that they all get the freedom they deserve and desire.

No Friends But the Mountains is written by Behrouz Boochani and translated by Dr Omid Tofighian. Published by Picador it will be out in hardback and paperback in the UK in July 2019. It is currently available to buy on Kindle. 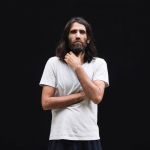 Behrouz Boochani holds a MA in political science from Trabiat Moslem University in Tehran, Iran. He was a writer for the Kurdish language magazine Werya, is an Honorary Member of PEN International and a non-resident Visiting Scholar at the Sydney Asia Pacific Migration Centre. He publishes with The Guardian and others, co-directed a feature-length film in 2017 Chauka, Please Tell Us the Time with Arash Kamali Sarvestani, and collaborated on the play, Manus by Nazanin Sahamizadeh.

Dr Omid Tofighian is a lecturer, researcher and community advocate. His current roles include Assistant Professor of Philosophy at the American University in Cairo and Honorary Research Associate for the Department of Philosophy, University of Sydney. He is the translator of Behrouz Boochani’s book No Friend but the Mountains: Writing From Manus Prison (Picador 2018).