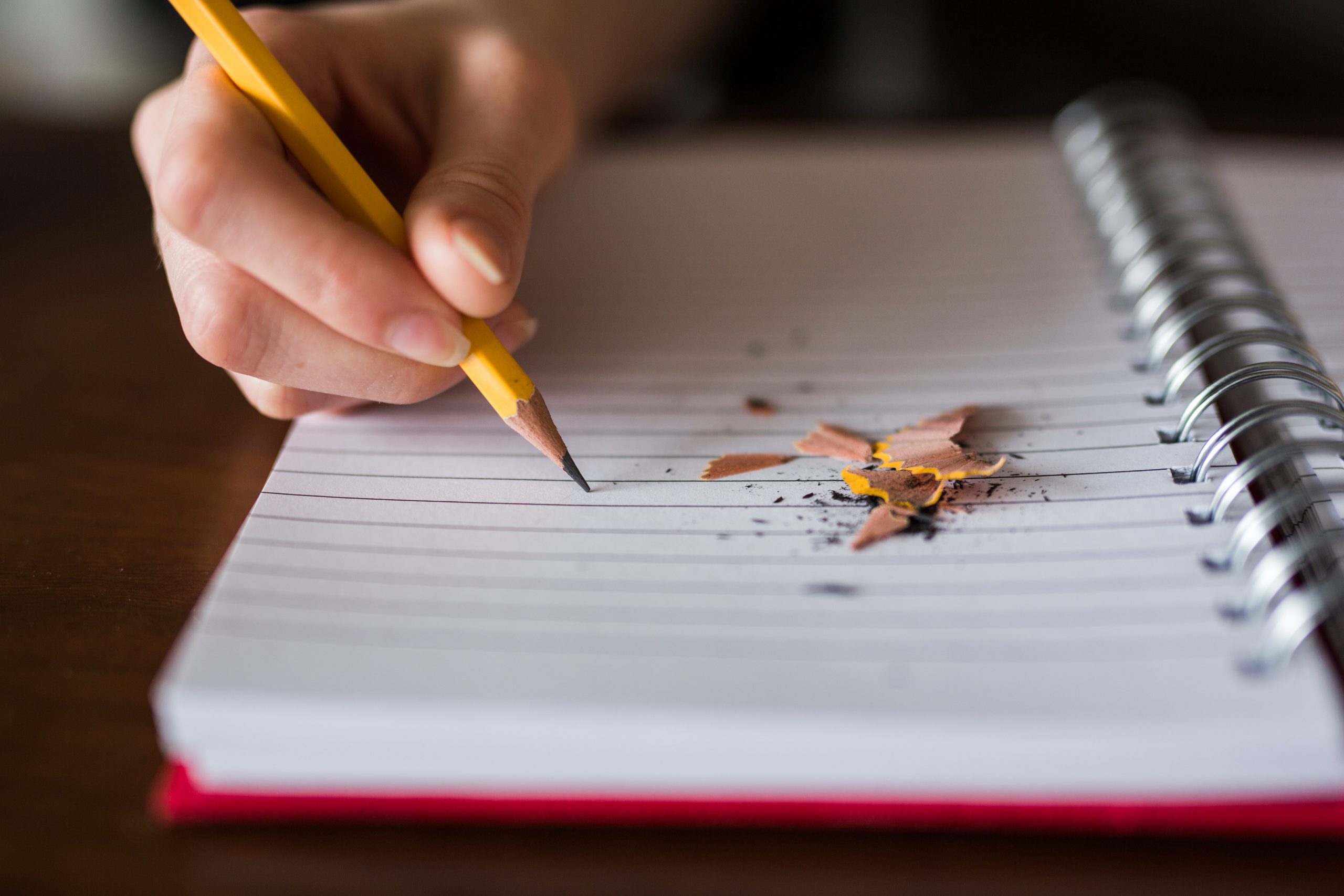 Continuing her series, Lizzie Hubbard writes about studying a creative writing degree remotely during a pandemic.

A week before my deadline, I stared into the white glow of a new Word document, wondering where all my ideas had gone. Swivelling around in my chair, I noticed that the plant beside me was shrivelled and brown. I thought I had been good at watering it. I tip my last sip of cold coffee into the pot, then turn back to the document, as if in that moment, it could have magically produced an idea of its own.

This was the first time I had to write to a schedule, rather than putting words down because I had an idea. I was annoyed at my own panic – the typing equivalent of stage fright.

Before starting my MA, I’d never felt the pressure of an expectant blank page. In fact, I’ve always had too many ideas, scribbled in notebooks, scrawled on the back on envelopes and squirrelled in the notes app on my phone. But this year has been the first time I’ve had external deadlines, workshop dates and coursework submissions. At first, it felt good to have something to write every week but as time went on, I desperately wanted each piece to be better than the last.

Sat at my desk, I considered taking a shower. Don’t people always say they get the best ideas in the shower? Mine always come when I’m waiting at train stations or when I’m in line at a crowded bar. I looked back at my old stories and traced back the moments of inspiration: a secret door at the end of an alley, a strange encounter on the bus, and an exasperated friend organising a doomed hen party. All these moments happened out and about in the world.

Like most people, the pandemic reduced my world to the length of the flat, with occasional trips to the corner shop. My aimless waiting time completely evaporated and with it the opportunity to be still, and curious.

Watching and listening was always the best thing for waking up my brain, and getting the synapses going, but confined to my flat, screens seemed to be the only window to the world, and other lives. Though social media claims to connect people while we’re stuck inside, it’s obviously not authentic. It’s too confused with posed photos, likes, and pushed posts from brands selling yoga mats.

“Threads and comments can’t replace proper, spontaneous conversation,” I said to the Postman, while I signed for another parcel.

On my search for new ideas, I clicked open BBC News, then quickly shut my laptop. The wall of awful headlines was just too much. I’m sure there used to be lighter, more mysterious stories in the news.

Over the past year, I couldn’t bring myself to sift through Covid statistics and insincere soundbites from politicians to find articles that made me curious. The ones about Ming vases discovered in attics, or cats returning home after year-long adventures, or giant snakeskins found stretched out along towpaths. With everything going on this year, I felt like I should have something profound and interesting to say about the evils going on in the world. But I wasn’t in the right place to produce a worthwhile ‘hot take’. The pressure made my creativity turn brown at the edges and begin to curl.

Three days before my workshop deadline, I left the flat to try to catch some ideas on a walk around Finsbury Park. The rhythm of my footsteps helped me think, in-between the moments when I had to jump out the way of people with pushchairs, or solemn joggers. With their faces under masks, they seem further away than the government recommended two metres.

When I returned home, I felt better and windswept, but still didn’t know what to write. I couldn’t subject my class to another piece about walking in lockdown. I lay down on the sofa, closed my eyes and listened to the sounds of the flat. Alien noises leaked in from the next-door room, where my boyfriend turned the dials of a new synth. The children next door shrieked and giggled in Polish. The low, purposeful grumble of Victoria line trains rolled deep underground.

I felt myself falling asleep, my feet dangling in the dream I left that morning.  The strange images and light returned to me. I remembered having a small spiralled fossil in my hand. I told myself I would remember this image when I woke up later, perhaps something to write about. But I’d told myself that many times before, only to find dreams slipping away with sips of morning coffee. I forced myself to sit up. I reached for my pen. Still dozy, I sketched out the scene focusing in on the smooth grooves of the ammonite. As I wrote my brain woke up, curious. I thought about how it would feel, cool and heavy in my palm. I started asking questions about what this object was, where had it been and how many hands it had been in before my own. Outside, the children whispered conspiratorially setting a secretive atmosphere. A tale emerged before me. Ideas started to unfurl, slowly. I know that having a nap isn’t the best way to get ideas under time pressure in the future, but there is something to be said about sitting still for a moment and letting yourself think in ink.

Lizzie is an MA Creative Writing student at Birkbeck, currently logging into her online classes from North London. She loves to play with language, both on the page and out loud. At the moment, she’s writing lots of short stories to distract herself from the world and to keep herself sane. You can find her tweeting about books, poetry cats and, sometimes, free Jazz here – @LizHub