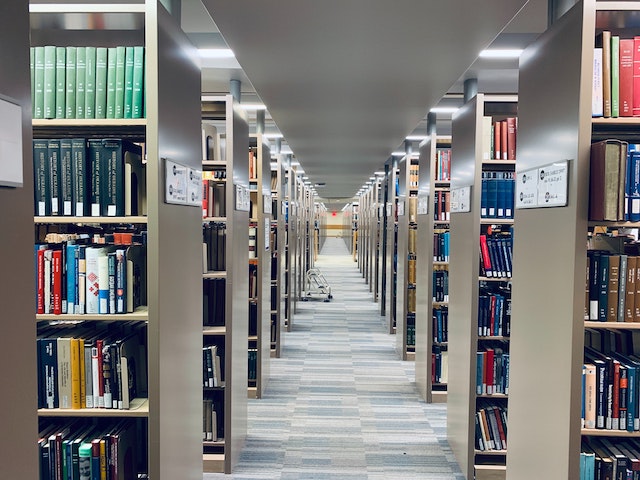 Liz Bolton shares her experience of libraries and what the future may hold in the current climate.

My lifetime use of libraries has been limited. Falling in the middle of five children, my nomadic parents had little time to read to me or my siblings. They did however lead by example. Both my parents were prolific readers, my mother often ‘devouring’ up to five novels a week. My father’s reading habits were more highbrow – biographies, metaphysical tomes, architecture and philosophy, although the occasional detective novel could be found at his bedside. Our many homes over the years were always crammed with books: hardbacks and Penguins, orange and turquoise, and we children were encouraged to read anything and everything. There was always a book to suit every taste whether Richmal Compton’s Just William series, Kingsley Amis’s Three Men in a Boat, anything by Raymond Chandler and Somerset Maugham, Jean Rhys, Elizabeth Taylor, and, and, and …

So a visit to my local library was not something that came naturally. The first use I made of my local as an adult was when my daughter was an infant. But then my own travels abroad, and boarding schools for my children, meant I scarcely visited a library. Then, much later in life, I supported the petition to keep my (now) local library open and took out a library membership. My most recent experience of a library was as a mature university student. To be truthful, I felt daunted by my visits, nervous to ask for guidance from the staff and frustrated at the time it took to find the location of the book I was looking for, only to discover that it was very often already out on loan. However, local libraries (as opposed to academic ones) go to great lengths to make them user-friendly and unintimidating.

Public libraries have traditionally been havens of peace, refuges from the stress of our own lives, where browsing the shelves one might rediscover books by favourite authors and encounter new and exciting works to be savoured (or sometimes rejected) later. Over the last half century libraries developed into places to take children, safe places where they and their carers could browse and discover the joy of books, amongst soft toys and rocking horses for the youngest of visitors. More recently still, computers have been included in the mix, and students, researchers and home workers (until March 2020) were able to spend hours in these publicly paid for sanctuaries, alongside simple book lovers. Not only are billions of written words to be found on the shelves, but newspapers, DVD’s and audiobooks were included for the asking.

Today there are just over 3,600 public libraries (including mobiles) in the UK. Yet only a disappointing 27% of adults use them, with 30% of these library members borrowing electronic resources without visiting – despite 72% of people believing libraries are an essential or very important service. In America, library membership and usage is substantially higher than in this country.[1]

In the nine years before Covid-19 struck, nearly 800 libraries in the UK were closed, amongst which was my very own Kensal Rise Library, donated to the area by Oxford University in the 13th Century and opened to the public by Mark Twain in 1900. A vociferous local campaign – supported by UK luminaries including Alan Bennett, Philip Pullman, Zadie Smith, Nick Cave and the Pet Shop Boys – failed to prevent its shut-down. However, the campaign raised enough funding for the library to reopen to the public in 2019, for limited periods, run by volunteers. Today, it is again closed due to the virus.

Covid-19 has meant that most libraries now only offer an online service or, at most, very limited access. In the London borough of Brent, for example, the online e-library service is restricted to library card holders and these cards are solely available by visiting the libraries themselves – which are now closed, or at best only open part-time. Apart from children and their carers, many of those relying on library services are aged 60+ and computer access for this demographic is probably limited or non-existent. And what of the many mothers (and fathers) who rely on their local libraries to inspire their children’s creative imaginations by introducing them to the wonder of words and pictures?

Undoubtedly the economic ramifications of Covid will result in the closure of many more libraries and centralised, computerised systems will replace these age-old sanctuaries of the written word. Unless action is taken by local people, there is no question that children and the elderly will be the most adversely affected by the closure of public libraries; students and young adults will continue to have access to school and university libraries. Infants and toddlers (particularly those from less privileged backgrounds) will miss out on the joy of entering the imaginative world of the written word with probable educational repercussions, while many elderly readers will endure a world more lonely and emptier than they hoped for in their final years.

So how can this problem be ameliorated and how can readers get involved? Recently my local swimming pool erected a bookshelf with a ‘Help Yourself’ notice on it. Punters are encouraged to drop off unwanted books and help themselves to whatever takes their fancy (I’ve taken and replaced several); my local tube station has done the same as has the local park cafe. These are great ways to share the joy of reading and perhaps this concept could be extrapolated? Travellers on public transport could be encouraged to take and leave books on their seats (perhaps with the donor’s remarks?) when they dismount; parents could drop off and pick up books at their children’s schools and nurseries; church-goers at their churches. Supermarkets and coffee shops could be canvassed to set up drop-off/pick-up book areas as could restaurants, cafes – and possibly pubs? In America (and probably elsewhere), bookshops are café/reading/meeting places, social hubs where customers are encouraged to sit, read, meet and enjoy. Waterstones and independent booksellers in this country are following suit. Perhaps public libraries could learn a lesson from these outlets and offer local communities a place to sit comfortably and browse books while sipping coffee or soft drinks? And perhaps too they could organise the sale of new works and provide ‘exchange ports’ for used books, and even offer the venues for book launches/signings – or even run writers workshops? Audiobooks have recently seen a phenomenal growth amongst ‘readers’ and the future will surely see this method of experiencing written works audibly grow even further and, just as e-books do, co-exist happily alongside physical books. Perhaps this another avenue that libraries could explore. These activities would not only encourage locals to use their library but possibly raise much-needed funds for libraries themselves.

The first British baby born in El Fasher (her claim to fame!), Liz worked in Greece and the USA as a ‘domestic hygenist’, a PR  practitioner, and music sponsorship professional.  She retired in 2016 and is currently a Yoga teacher/dogwalker and wannabee writer/BA Creative Writing graduate.  Glamma to granddaughter Bay, and mother to movie magnet Katie and budding tycoon Angus, she lives in London with her Cockapoo Tuppence.