She got her feet from a man who fell from a balcony. Fatty padding and tough soles like a hiker’s prevented the foot pains that were common in people of his largeness. Only the best for Gay. His secret was that he painted his toenails red yellow green blue and purple like a rainbow, making his enormous winglike feet incongruously beautiful. It was lucky he landed on his head.

Chemically he was less pure; that was no secret from either his friends or the toxicology report. Whatever he’d taken convinced him to escape the party with some haste and that leaving via the second-floor balcony was a safe way to do it. Two of his friends tried to pull him in while a third stood back and panicked, but neither he nor the Earth’s gravitational pull could be deterred.

The moonlight was overpowered by spinning blue beacons and dazzling full-beam headlights. The overlapping voices and honking horns sounded something like an orchestra tuning up. Illegal substances got shoved in bins and under couch cushions while his platonic nexts of kin rushed out to weep in the gutter. When she left they were caressing his cracked skull, puzzling over the mysterious stumps at the end of his legs.

She walked for miles on those feet, across deserts and rock pools, beaches and oceans, realising finally that she didn’t know or care where she was going.

She got her legs from a woman known for leaping across chasms to reach fruit on the other side, and in her younger days chasing down ostriches. If there’d been any ostriches left she wouldn’t have resorted to eating the mossy fungus out of that ditch, but she’d been starving and what was the worst that could happen?

The worst was that the backs of her new legs were streaked with diarrhoea, but it was nothing a bath couldn’t fix. Gay was in love with the woman’s locks too but left them out of respect for the dead, and because the tribe’s shaman had nightmares of hairless women with porcelain legs and smooth baby’s armpits. Gay said a few words at the funeral then ran off at near-ostrich speed before the rest of the tribe could catch her.

She got her pinky finger from Harini, said to be the greatest sitar player of all time, or would have been if she hadn’t died in a 52°C heatwave before her promotion to soloist. It was a pinky finger and a half; sturdier than most index fingers but with a deftness that could send shivers down your spine.

Harini was resurrected decades later by a necromancer called Zibuzi, who added her to his private menagerie of historical masters. He already had the Russian composer Arkady Zverev and Sweden’s greatest popstar Agnetha Sjöholm, better known as Smäll, living in the west wing of his ancestral castle, along with painters, dancers, chefs, poets, DJs and animators. When Zibuzi saw the dismembered Harini he took pity on her and made her one of his door openers, staffing the parlour door in the east wing where the necromancer’s resurrected wife lived.

Gay rarely appeared before mortals, but she was proud of her new central nervous system and opted to stalk her next quarry in the open. The woman with the small and practical breasts turned to see Gay, a visceral jigsaw of bodyports shambling towards her, and screamed so loud the spiders in the attic scurried away. When the sinewy arms reached for her she fled straight out the door and into the path of a horse and carriage. She was dead within the hour, and the horses were so spooked they never pulled a carriage again. Gay vowed to move invisibly thereafter, like a dark mirror that reflects nothing or a star’s twinkle lost to daylight, and by way of apology to the deceased’s family she only took the left breast.

At first it was easy. People were dying every day in such multitudes that the probability of an undamaged eyeball or a solid hip was reasonably high. Routine searches of morgues and cryogenics labs were always fruitful but even in those early days she preferred the personal touch of stalking the doomed.

But once she had a rudimentary body, she somehow acquired standards. Maybe her bladder could be stronger; maybe her teeth were too yellow after all. Her eustachian tube, though fine at first, kept filling with mucus, capsizing the pressure in her middle ear, throwing her off-balance and dulling her hearing. It wasn’t illegal to find replacements, just frowned upon. But better a frown than death by eustachian tube disorder.

Some ailments could never be foreseen because they were contextual, not physiological. Her knowledge of the human world accumulated over the centuries and she began to understand abstractions like societal perceptions of bodyports and the appropriateness of their usage.

She got her penis from a monster. The humans considered him evil from his hands to his feet but these crimes had sullied the penis in particular. She got her empathy from the survivors, probably, which grew over time until the penis came to disgust her. It became a duplicitous serpent promissing ssshallow benefitsss, and in the end she had to discard it altogether.

Her second penis came from a young girl who had leapt from a burning building. The girl hadn’t wanted to jump but after careful consideration she decided it was the least terrifying option.

She got her lungs from a former swimmer with a chest like a barrel, who played saxophone in a jazz band until his overdose. Then she replaced them with one lung from a fridge installation engineer and one from a famous martial artist, which together formed the perfect complete set.

She got her last eyeball from a little girl in a breathing tube in the forgotten part of the hospital, where the patients who’ll never wake up live. The girl’s hallucinations were so bad she kept jumping in front of traffic to escape robots the size of molecules. After three crash-induced comas her body just gave up. If the doctors had known the girl was tetrachromatic they might have taken her eyes before Gay did.

The girl’s last sight was of the universe opening and closing like an eyelid, synchronous to the terminal pulse of her own heart, and spiralling cocktails of nebulous colours only ever seen by peacocks and certain kinds of decapods.

She reminded Gay of her own gloomy youth, her isolation, her impotence, her formlessness, her abandonment by the other shadows.

She’d lived under the earth, passing through rock, ocean and fire, then in the air, as a wisp amongst clouds. Birds and fish had been her first manifestations. She’d been a stowaway, hiding beneath feather and fins, with no authority over movement or destination. She’d developed a taste for bodyhood. To be accepted on the material plane.

She promised it’d be her last eyeball. Five was enough for anyone. Two human eyes, one amphibian eye, one magnifying eye and one tetrachromatic eye. When she opened all of them at once the universe turned into something different. What the Corporeal call reality was gone, replaced by something with new dimensions and unimaginable colours; a whole new set of emotions and a revision of universal truths.

It got harder when mortality rates dropped and the world entered post-adversity. When Patience Cryogenics got knocked out by a freak storm she sourced numerous mods, including a huge bushy hairdo with spiral streaks of every colour. But that was an anomaly, and the scandal resulting from the stolen organs only led to tighter security and more rigorous hurricane preparedness.

She got her veins from the victim of a violent mob. They caught him in the streets, encircled him like experts in violence and beat him to death, shouting “heartless” and “mortal” as they tenderised his head with their boots.

Gay watched the blood wax across the pavement, wondering what could harden a person to such gore. The mob dispersed like children, their appetites fed, their eyes gleaming with post-brawl clarity. She floated over to the dead man and excised his veins, removing his last shreds of recognisability.

She got her clitoris from a woman on top of a wind-battered tower. The woman had lived forever; her life equal parts boring and eventful. She’d been a monk, a prisoner, a warrior, a housewife. Now she lived a meagre existence, far away from the city of immortals, waiting to die, her rare visitors seeking their own cure for life.

The world had changed beyond recognition since the last time Gay appeared before humans. Somehow she knew Narayama wouldn’t be scared.

Narayama was looking down over the tower’s parapet, translucent hair streaming in the wind. Gay approximated the sound of footsteps for the first time in centuries.

“What are you?” asked Narayama.

There was no hiding her fear. Gay could sense the cold waters rushing through her, could smell the panic on the back of her neck.

Narayama nodded. “My body is all yours if I can be rid of it.”

Narayama mouthed a stream of invocations, pausing only to bite down as her knees hit the stone. Gay surmised she was addressing some third person who wasn’t present, words to the effect of readiness, of eagerness to join this other person, of satisfaction and contentment. She called Gay a servant of heaven. When she ran out of words, she lay groping her heart like a lost lover’s face.

Eventually the death toll picked up: human immortality proved to be trifling in the cosmos’s grand scheme. By this time Gay was almost complete. She got her wings from a flying man, a tall, handsome angel who’d given up terrestrial government for the life of a bird. He’d succumbed to heart failure at only 840, young for someone like him, and plummeted into Gay’s open arms.

“Oh gods of Anemoi, it’s all true,” he said, when he felt her embrace and slipped into permanent unconsciousness.

The wings were large enough to envelop her entire body when drawn, and wide enough to eclipse the sky when spread. Aviation was different from just floating. She sailed across oceans, the wings lifting her effortlessly, her great wide shadow scaring away fish and boats.

People saw her and called her an angel and summoned her to earth to answer questions on policy, technology and other great issues of the day. Some of them formed cults and worshipped her, cutting off their appendages as offerings, or else writing wills outlining their donation. This way she acquired fingernails, eyelids, legs with hooves, intestines, a tongue, a pituitary gland, ovaries, talons, tusks, a bladder and a spleen.

Finally there was no one else. The last person was barely a slither of flesh with half-developed lungs; bloody rosaries dangling from a hunched pair of shoulders. When Zora, as she called it, fell in the dust and gargled its last gargle, the human race became extinct. Then there were only the hot, sandy winds and the skyscraper-grey rains. The days became interminable, the nights became legion. Gay wandered the deserts forever, alone. Apart from her, the Zora’s desiccated figure was the only landmark.

She got her shoulders from Zora. 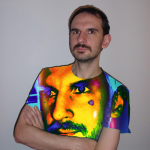 Probert Dean is from Liverpool. His work is forthcoming in Stupefying Stories and has been published in Bunbury and Storgy. He is currently studying MA Creative Writing at University of Manchester, writing an autobiographical science fiction novel and overseeing the experimental music ensemble Unstoppable Sweeties Show. On his days off he likes to work part time in an office.