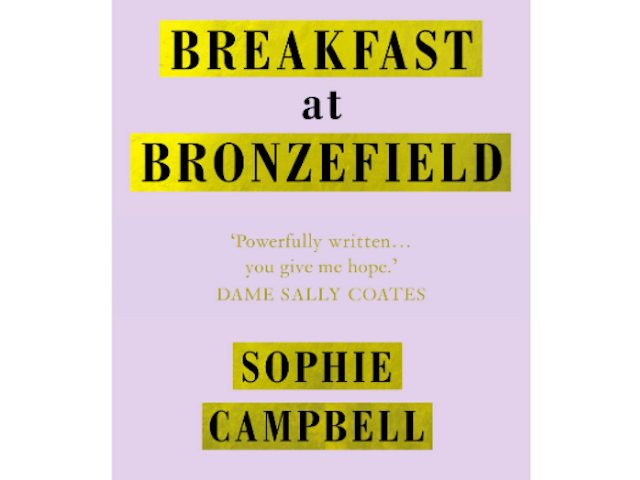 I write reviews for MIR Online because it means I’m often sent books I would never usually pick up to read of my own volition. As a fellow writer, I think that reading outside your comfort zone is important. From the moment ‘Breakfast and Bronzefield’ arrived in the post, with Sophie Campbell’s neat handwritten, return address and lovely packaging (pictured) I had to ask myself why had I not particularly sought out, or wanted to read, books by or about women in prison before, especially when the persecution of women through history is central to my own writing.

This book is a contradiction. Sophie is not the type of person we would view as a stereotypical convict. The back of her book reveals she is a ‘former public schoolgirl.’ I silenced my rage against our unbalanced meritocracy (the one that allows a public schooled prisoner a platform when such an audience is denied to others) and delved into what Sophie actually had to say.

Climbing down from my middle class ivory tower, I was not disappointed. You have to suspend disbelief a little when reading this book. Early in the book, you constantly ask yourself what Sophie did to end up in HMP Bronzefield, something that she eventually addresses later by simply stating ‘That’s personal.’ She confides that the world tends to see the crime and not the person to an almost fetishist extent.

The reader will never have all the answers to all their questions. Echoing the author’s first night in the prison, we are presented with disorientating, disparate snippets of information, none of which hold the answers we are seeking, but are all specific and interesting. This is mirrored in the author’s experience, when she highlights the self-professed ‘curiosity’ she felt when learning she would be incarcerated on remand.

As a usual reader of fiction, I found the first fifty pages slightly jarring. We glance over the lives of a random array of characters, and learn startlingly little about our protagonist apart from her frustrated desire to leave the country and her overwhelming ability to be instantly judgemental of other inmates. Although maybe I am being unfair, since the book is written in an omniscient past tense that belies the ‘present’ action.

The judgemental tone shows the author has acquired some learnt-behaviours due to the unfair yet highly regulated prison setting she finds herself in. We are inducted into a world where to harshly judge and be judged is normal. Although later, it is clear the author has had time to reflect on her earlier situation and her judgements of others.

Campbell ingeniously introduces us to her world through not only invitation but also deception; she makes us complicit in her judgements, as we too judge the author’s prejudices, and rank our own against hers, in a way that would be anathema when reading, say, a fiction novel.

We have to wait until page thirty before any of our desire for background knowledge on the author and protagonist is satisfied. We learn little about her family and yet again, the way this changes our reading of the narrative and perceptions of the characters is indicative of how our society judges people: by accidents of birth rather than their behaviour. It seems purposeful that Campbell drip feeds this information. It makes any vaguely moral reader more aware of their predispositions.

As the book continues, the judgements turn to physical violence and self-defence. The writer elucidates: “I guess when you’re placed in a different culture, you have no choice but to assimilate, and the prison rules dictated that if you were humiliated in any way then you had to retaliate.” This book is certainly about violence, the kind of violence between women that society likes to pretend finishes in the school playground once the perpetrators are kept inside at lunchtime, and once everyone has grown up a bit.

By page one hundred, we are deep within the prison world, doubting our judgements, and questioning our prejudices. However, I still felt short on empathy for the protagonist, thinking ‘how could she possibly have been violent enough to land her on remand for GBH?’ A pacifist reader may find it bewildering when the author voices the clichéd epithet ‘violence is never the answer’ and assures us that except for the incident that brought her to prison, she had ‘pretty much lived by that principle.’

The world of the prison is developed by each surprising incident between inmates that our author-protagonist witnesses or is directly involved in. Skilfully, Campbell does not confide all, but initially merely hints at the more depraved and shocking incidents that befell her. This negates the temptation to victimise or look down upon the writer or her offender-peers, and instead allows us to take in, with open eyes and minds, this world that most people know nothing about. The text does not fetishise or sensationalise the salacious details, but presents simply first hand experiences and accounts grounded in fact.

As someone who has never watched a prison drama, I chose to review this book because I thought it was a text that would let me see this world from someone else’s perspective. Whilst I’m not quite there yet, the book offers so much more than perspective. It offers facts, statistics, cleverly woven into the narrative so that the reader can learn, without feeling taught or lectured to.

If we weren’t such a judicial and litigious society, whilst at the same time having this ever present stain of moral bankruptcy, I feel sure that this book would do for the prison system what Caroline Criado Perez’s ‘The Data Gap’ has done for the women’s movement. That is to say, we’d learn how mainstream society (can we even say, the patriarchy), is still invisibly eroding the basic human rights of those who do not have the social or cultural capital, or the knowledge, to fight back.

Less than a hundred pages in, readers are delivered the poignant description of the ‘Mental Health Wing’ as the protagonist is moved there voluntarily. The prose takes a simultaneously more formal and lighter tone. There is no doubt that the writer views these women’s predicaments as both serious and devastating. There is none of the amped up tension or wired pace of previous writing, none of the salubrious description of the earlier chapters and it is not (like so many other written accounts of psychiatric facilities) designed to shock. There is a surfeit of statistics and well-reasoned recommendations. Much light is shed on the horrifying realisation that there is no national strategy to deal with dementia in prisons, and those with severe mental health are likely to be institutionalised in prison first, with hospital as a second option if they’re lucky.

The author later belies this respectful attitude to mental health when, around halfway through the book, she states that the boredom of being in an art class in Bronzefield was ‘probably the closest I’d ever come to wanting to kill myself’. Which emphasises a sarcastic tone the text takes throughout.

Whilst this account is so powerful, both in its use of statistics and the necessary and reasoned defence of the idea that prison should not be unjust (even if it is not designed to be fun), Campbell seems to have kept the ‘hard man’ attitude that allowed her to survive her experience ‘inside’ without being completely broken down emotionally. There is a flippant note and hypocrisy to the way she describes small details – like this art class – that shamefully strike a jarring note in what is otherwise an interesting, poignant, well researched and important account of life within the prison system.

The book goes on to discuss, with both first hand accounts and ample statistical research; sexual assault, work and money, and drug dealing in prisons, homelessness and poverty on release, and ethnic diversity and representation (or lack of) in the legal professions and court system.

Interestingly, each issue touched upon has a surprising revelation. Such as the author’s reasoned opinion that court probation officers, legal counsel and even judges from the same ethnic background as defendants do not necessarily empathise more, or seek greater justice, when representing people of their own race. In fact, racism is often so institutionalised that sentencing and recommendations are likely to be harsher from individuals from common ethnic backgrounds, as reflected in Campbell’s experiences.

Campbell seems to be, unsurprisingly, passionate about not subscribing to the predefined persona others have ascribed to her. The main thing that she often cites as part of her identity, both hidden and revealed at appropriate moments, is that she is highly educated.

When discussing the education programmes offered by ‘outsiders’ she describes the often patronising and unstimulating nature of many of these courses. Campbell asks, why do female prisoners get ‘debate club’ organised by undergraduates, asking them to prove that ‘cats are better than dogs’, but male prisoners reportedly learn coding? She illustrates that the notion that she was uneducated was the most common misconception people had about her. Whilst she did not like to show off her educational background, she despises the fact that ‘everything was deliberately dumbed down to the point where it was hard not to be offended or else lose interest.’

This author makes us challenge an often-held preconception that only stupid people make mistakes bad enough to land them in prison. Anyone can make a mistake. No one should have to pretend to have reformed his or her behaviour, especially when denied the opportunity for appropriate rehabilitation through work or education.

Campbell’s determination not to give in to performing a stereotype and to make something of herself despite the odds is remarkable. At one point, she says she’s ‘not naive’ and is aware of the barriers facing her when she leaves prison. She seems to have since overcome many of these barriers by sheer stubbornness and an intense work ethic. She speaks with disdain about others she met who were willing to play the system, both inside and outside of prison. It’s this quality – the sheer dedication to just and fair behaviour – that led me to finally empathise with the protagonist.

I can completely understand why this book has been self-published. Campbell specifically points out that when she ‘tried to find a commercial outlet for this book […] publishers and literary agents […] wanted [her] to focus almost exclusively on the trials and tribulations of being a black woman in prison.’ The world was, again, trying to put the author in a box that she refused to subscribe to. So I completely applaud the fact Campbell has self published and maintained the independence and authenticity of the author voice.

Overall, it is an engaging book, extremely readable. The author does not hide her own prejudices or character flaws, inviting us to urgently consider our own. The surprisingly little we learn about her circumstances and background serves to make the narrative a more objective account of her personal experiences.

The book challenges the reader’s own prejudices, from classism and sexism to racism. It also challenges us by making us engage with a protagonist we may struggle to empathise with. Sophie Campbell has written an account so blisteringly honest it can be hard to identify with. And if you can’t empathise, then what does that say about you, the reader?