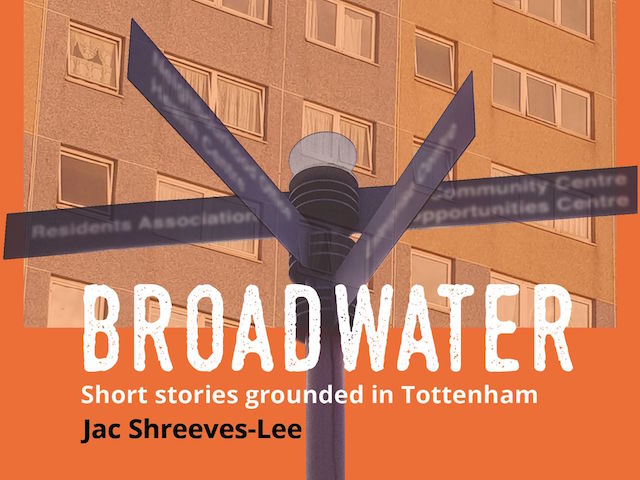 This reviewer is possibly one of the few MIR readers to remember the Broadwater Riots in 1985. Broadwater Farm is a place where post-war dreams of concrete utopia ended in sub-standard housing, riots and violence. Triggered by the police killing of a local Afro-Caribbean woman, Cynthia Jarret, the riots became international news when PC Keith Blakelock was consequently murdered on the estate by a mob who attempted to decapitate him with machetes. Author Jac Shreeves-Lee refers to the riots in her Author’s Notes – and later riots sparked by the death of Mark Duggan – on this (then notorious) North London estate in Tottenham, after which her debut collection of short stories is eponymously titled: Broadwater (Fairlight Books, September 2020).  She highlights the fact that today Broadwater Farm is no longer defined by its troubled past, and the burglary rate is so low that it makes it one of the safest areas to live in Haringey.

Broadwater illustrates the exceptional ethnic diversity of the Farm, through the characters’ stories of the economic struggles, housing problems, mental health problems, and the ongoing battle to stay afloat. They highlight the problems faced by many estates in our inner cities. As Teapot’s brother (Teapot’s Story) so incisively puts it:

“Look, however you dress it up Ricky, so-called regeneration is just a pretty word for social cleansing.”

Shreeves-Lee creates the imagery of a close-knit community by interconnecting the characters and restricting the location to Broadwater. From the poetic mixed-race Teapot, who dreams of a better life, to stroke victim Norma and her wayward husband Frank, to Winston and the Father Christmas annual parade, to the poignant story of Ruth and Doug who have lost their baby, Shreeves-Lee acknowledges:

“Broadwater explores universal conflicts, dreams and losses that we all share as human beings, regardless of demographic tag or location”.

The author has an acute eye for detail and her descriptions are both compassionate and apposite. “[…] in a grey face creased like throwaway paper”; “She glared at Michelle, her green eyes beading”; “Malteser eyes”; “[…] the deep throaty chuckle, like cold milk crackling through Rice Krispies” are just a few examples of her many perceptive observations. She also has an ability to emote the loss of a loved one, abundantly evident in stories such as Zu Zu’s:

“On the November night when Kenny was killed, he left Zu Zu, Johnny and Frankie behind and took his dreams with him. Zu Zu was flooded all over again and, like a paper boat, she folded and sank.”

The publication of these evocatively written short stories, rawly depicting the lives of “ordinary people”, is acutely relevant in light of Windrush, the Grenfell fire and the recent police killings in America.

Jac Shreeves-Lee is a clinical psychologist and a magistrate as well as an award-winning short story writer. This collection demonstrates her innate ability to empathise and explore indepth, character and complex relationships. This is a beautifully written collection. Her writing drew me into her world. I highly recommend this collection.

“Broadwater” by Jac Shreeves-Lee is published by Fairlight Books