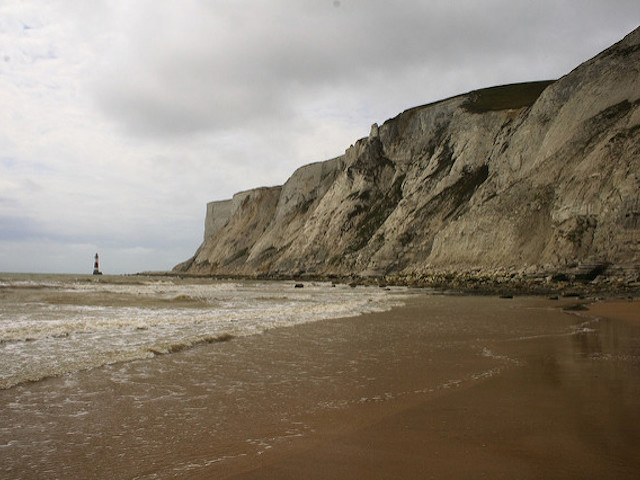 She had to go there, to the place where. An impulse. She cancelled her clinic, took the tube to Victoria, queued to buy a ticket. The touch-screen kept freezing. She broke a nail jabbing. Did he buy a single, or a return?

She got a black Americano, found an emptyish carriage, slid into a window-seat. A beefily-built man in ear-phones the size of burger-baps sat across the aisle. He lifted a MacDonald’s and chips from a paper bag. Fumes of greasy meat cooked in cheap fat up her nose. Taste on her tongue. She sipped her coffee. It almost burned the roof of her mouth off. She stuck an arm elbow-deep in her bag, found half a Kit-Kat. What did he eat last?

The train slipped across the river, past the butchering of Battersea Power Station, glided above the red-brick red-bus High Streets that slice through South London. What did he see? Did he even look?

The weather didn’t know what it was doing. Crowds on platforms wore everything from jackets and jumpers to shades and shorts, turning dubious faces up to a grey slab of sky. What was he wearing?

Beyond East Croydon, strips of garden ran down to the track, all patios, plastic furniture, trampolines, and sheds erected at weekends from flat-packs bought at B & Q. The train sped up where suburbs thinned and green began. The landscape turned lavish beneath a broadening sky. The sweep of the South Downs filled the windows. (Did the Downs uplift him? Even for a moment?) A farm. Cows. A man in waders with a rod in a pond. Tractors, horses. An England flag the size of a house, flapped on a village green. Kids on bikes, dogs, and a woman with a shopping trolley waiting at a level crossing. Then, Sainsbury’s, Curry’s, PC World: the outskirts of it-could-be–anywhere:

‘This is Eastbourne, your final station stop. Southern Trains apologises for the delay to your service today, which was due to ongoing train crew issues.’

She emerged from the station, blinking in the sun. Oxfam, Pet Welfare, a café advertising ‘coffee cheaper than the sea front’. A couple with shaved heads and tattoos shoved past, all shouty-sweary, waving cans of Tesco’s lager. Barclays, NatWest, HSBC, Lloyds. A man with a megaphone boomed, ‘Release yourselves from the chains of the Banks’. A Peruvian band playing Sounds of Silence loudly. People in stripy t-shirts carried stripy towels in stripy bags. She’d forgotten how the seaside can bring people out in stripes. She reached the sea-front. Seagulls, fat and squat on the pebbles. Deck-chairs, Union Jacks, Kiosks selling ‘Ice-creams, Drinks, and Treats’. A bandstand. ‘Buck’s Fizz playing in July’. The Pier lunging out on black laddered legs, its shimmering white pavilion topped with domes of gold and silver. Did he linger here, or go straight up?

The elderly wobbled with sticks or zipped along on electric wheels. Beachcombers hovered over metal detectors. Young families licked ice-creams. Teenagers sat cross-legged in circles with lunches of crisps and Coke. Scraps of sound in the air. A mother calling a child. Screams as sharp-edged waves lash paddling legs. And all around the whoosh of the tide, the whine of the gulls. She imagined it in his ears. Did he hear any of it?

She followed the rust-coloured path westward past a Bowling Club, a private school, a café at the bottom of the cliff. She steeled herself, and leaned into the slope, a warm breeze on her face. Where the path widened and the incline softened she looked back. Her gut lurched. She was giddily high already. The wind was keener, cooler, the drone of traffic dimmer but for the odd revving of a motorbike. At a fork she went right. Which did he take?

A meadow full of buttercups and tiny blue flowers she couldn’t remember the name of. Forget-me-nots? The sea appeared ahead, baby-boy blue. At the edge, signs on battered planks nailed to posts the right height to trip you over, said: CLIFF EDGE, and DANGER: CLIFF EROSION.

She craned to glimpse the chalky white crumble of the cliff-face sloping away, obscuring the beach below. If she leaned far enough out to see right down, she’d be over. If you could look, you could leap. Five hundred and thirty-one feet of cliff, cliff to batter flesh, smash bones, bounce and toss a body. She imagined pulverised organs sticking like hot jam, shit and entrails splattered everywhere. She’d read in the paper about a dog chasing a seagull, running so fast it overshot the cliff, hit the sea at high tide. Survived. Did he take a run?

Engraved on a stone several feet away:

Mightier than the thunders of many waters,

Mightier than the waves of the sea,

The Lord on high is mighty

He had no time for God. She took in the soaring sky, the vistas oozing metaphor. Opportunity. Reinvention. New horizons. Had none of it spoken to him?

Beachy Head: from the French, beau chef, meaning beautiful headland. She’d looked it up. To her east, the sulphurous haze of Hastings. To the west, The Seven Sisters.

And he’d had just the one.

When he hadn’t returned her texts, emails or calls she’d phoned his office. They hadn’t seen him in three weeks, they said. Not unusual, they said. It was news to her. So was the booze, the drink-driving charge. And that Bruno had left him. Again. Gone back to his ex in Brazil, this time

Owen’s five-year-old face loomed in her head: saucer eyes, apple cheeks, button nose, cake-hole mouth. Everything about him as a child was pudge and squidge and wobble-like-jelly. If he’d stood against a wall and you drew around him, it would be more or less a circle. Until, around his sixteenth birthday, he woke up six-foot sexy, heartache handsome. Girls thrust their Wonderbra cleavages, made Maybelline eyes at him. An older boy touched his bottom. He liked it.

While she studied for Medical School, he screwed for England.

‘Why can’t you be more like your sister?’ their mother said.

They’d never had a father to say anything.

At the stop for the bus back to Eastbourne, a notice for the Samaritans: Always There Day and Night, Call 116123 (free).

I’m at B. Head, his text had said.
His body has not been found.