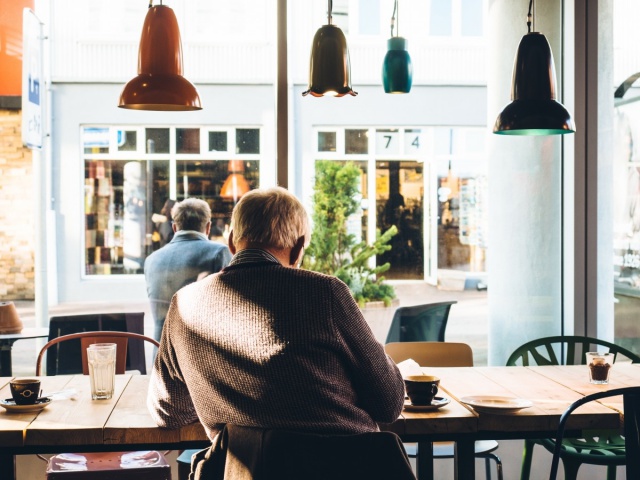 Idea for a Story: Café Man by Nick Trench

A man who has just enough money to spend time in cafés. He also needs time to ‘come across’ them accidentally.

No café becomes too much taken for granted. He understands the difference between ‘habitual’ and ‘routine’. He does not want to become ‘part of the furniture’ (an intellectual, for instance, who is expected to live up to certain standards and might be a prize customer, albeit one amongst other valued customers). He is happy to pass the time of day with the waiter or the owner, but he wants to be treated as someone who is ordinary but civilised.  The time between cafés, ideally, is part of being in the café.

The man is in a café at the moment. That is why he is thinking these things. It is an Italian café. It is a beautiful mid-spring late afternoon.

The cafés are ‘idylls’, they are discoveries that he makes for himself.  These cafés are not famous or well-known – that is important. He has the need to jump between these idylls. Preferably the café has a terrace, but he will be inside and by the window if possible. This is the seat he occupies now, in the early evening, in an Italian restaurant which is located within a fork in the road, so that he can look across the restaurant through windows on to another road. The sun streams in through the windows opposite but does not quite reach him. He does not mind. He is warm enough and it is comfortable.

This afternoon, on a terrace of a café on the other side of the same town, he was approached by a beggar (a quite well-dressed young woman). She pointed at her mouth. When he does not feel threatened and when he is able to do so, he will give money.

He is not ‘Café Man’ despite the title of this story, which is, in any case, a provisional title.

These are not expensive cafés. He does not think of his practice as ‘café hopping’, or it being a ‘café walk’. Rather, it is ‘café lurching’, but not in a drunken sense. There may sometimes be an hour or so between lurching from one café to another, other times many months. He does not seek out these cafés, but it is the greatest relief of all when he reaches such an idyll (these are necessary idylls) – a greater relief than being behind closed doors at home or in his hotel.

The lurching (at its best) is balletic, even that lurching which might take many months. It is not dissimilar to the childhood game of jumping between the cracks in the pavement. It can only be achieved with a great consciousness of effort and presence of mind. (But ideally, he should be leaping synchronously with the beggars as if moving across the stage in a film musical.) 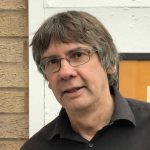 Nick Trench is a writer and artist living in Hampshire. His artwork, including paintings and photographs, has been exhibited in the UK, Germany, Switzerland and Lithuania. He is currently working on a novel.