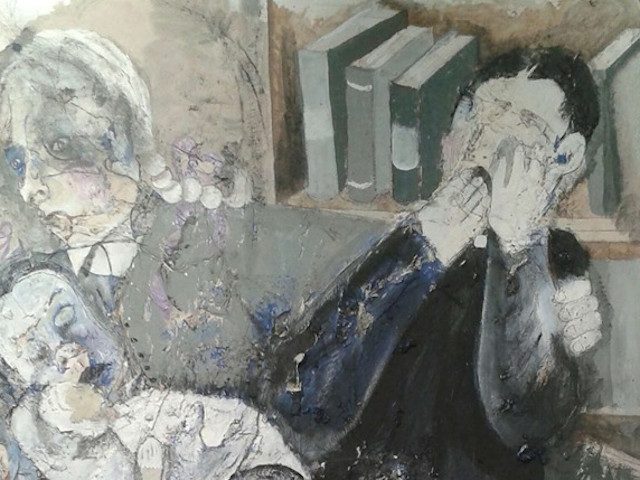 It is one shop in the long, long avenue of shops called Highstreet. Everywhere, people are perusing window displays, entering the shops, leaving with fully compostable, branded bags.

Shopkeeping is the oldest profession, and while nobody would aspire to it exactly, neither should they be ashamed. It is necessary work.

I have no prior experience. I have substantial employment gaps in my CV.

I am prepared to work hard as part of a team and greet every workday with a smile and a positive attitude.

I have a below-average grasp of mathematics, poor handwriting, and no sense of direction.

I am excited for the opportunity. I am grateful for the chance. I am hungry for a challenge.

I have worn my smartest shoes of biting, brown leather, and an old skirt of my mother’s, from before she had me and changed shape. Mum has dressed smartly too, even though she will stay in the car. Her nails are immaculate, long and strong on the wheel, and she says good luck knock them dead, gripping my thigh through my wool skirt and then the wheel again. But I don’t move.

Oh, for heaven’s sake. But she’s already reaching for her bag on the back seat.

Please, just half. Just a half and I’ll be alright.

Mum opens her handbag on her lap, rummages for a moment, and removes the sleek, dark case that matches the branding on her sunglasses, her lipstick and the sanitary products in the medicine cabinet at home.

We’ll split one, she says, I could do with a bit myself. I nod and thank her repeatedly, making promises to manage with less in the future, but not specifying how much less, or when.

Afterwards, I’m really running late. Mum sprays me with some cutgrass smelling stuff, and there’s nothing else for it but to get out of the car.

Knock them dead, she says, checking her teeth and nostrils in the rear-view mirror.

You’re good to me too, she says, and I know she means it.

There are perhaps a dozen purchasers milling about the shop floor and two shopkeepers – one behind the counter, wrapping a small mountain of items for an elderly purchaser, and one arranging books on a shelf in order of height. I approach the latter.

Hello, I’m here for an interview, I say.

Congratulations, you’ve got the job, says the shopkeeper, who is about five years younger than me and possibly female.

But I haven’t had an interview, I say.

Alright, says the shopkeeper. What kind of interview would you like?

Something official… perhaps in an office?

There isn’t time, says the shopkeeper. Here, help me with this and I’ll ask you some probing questions.

I begin organising a stack of books, largest to smallest, and the shopkeeper says, Are you flexible?

I take the criticism, hand the shopkeeper a vast atlas – its cover shows an erstwhile submerged country.

Are you looking for full-time or domiciliary? she says.

I don’t ever want to leave, I say. I want to live inside the walls.

Fabulous, she says. She sounds bored. Have you any relevant experience?

None, I pass her a book which is extremely heavy and contains 90% the same word.

Good, she says, ticking the book off a list on her forearm. How old are you? she asks.

Too old to be doing a job like this, I say.

Ain’t that the truth, she says.

We then spend several companionable moments putting stock on the shelf: a very old and linguistically obsolete German dictionary, a maintenance manual for a prototype car, several pop group anthologies, a pocket-sized complete works of Shakespeare that omits the least-famous plays. A yellow star on its cover detains the words: As seen on TV!

Is that it? I say when all the books are on the shelf. Did I get the job?

Almost, says the shopkeeper. You must first tell a secret.

Not that, says the shopkeeper. I hadn’t noticed the other shopkeepers circling. They surround us, blinking dryly.

I have little self-worth, I say, but I am trying to have less.

It will have to do, says the shopkeeper. And she shakes my hand. Her skin is very dry. Welcome to work, she says. I think you’re going to be very productive here.

Welcome to work, echo the other shopkeepers. Welcome, welcome.

First, I am made to cut my hair into an unattractive style. You are ugly, explain my new colleagues, but you could be uglier. I am issued a uniform. It makes a sound like crackling fire whenever I move, and the armpits reek. When I try to say it is the wrong size, my colleagues tell me it belonged to my predecessor. The words Ask me for anything scream from my shoulders. Well done, I am told. You have earned this, I am told.

My first day goes smoothly enough. There are a lot of things I am not allowed to do, like speak, or smile – especially near purchasers. I am shown to room after room and told to organise books in order of hue.

Night already, and my sleeping quarters are on the floor of Goods In. My bed is a palette lined with the pages of unsold Christmas hardbacks, and I feel like a rescued animal with some invisible injury. It is only as I am drifting off that I realise I haven’t had any since before the interview, and I fall asleep smiling. In my dreams, brightly coloured oblongs ask me illogical questions and scream when I cannot provide satisfactory answers.

The washing facilities could really be better, and there’s only one toilet, which everybody must share. For breakfast, we use the communal microwave to heat things in pouches, and make instant coffee, thick as gravy, in a stained plastic jug. Despite all this, I am feeling positive as the training begins. Twenty-four hours without sunlight has left me feeling translucent, light-headed. My mouth is stale and papery. I don’t smell like myself.

What will happen if I forget my unique user ID?

We don’t know, say my colleagues gravely. It has never happened.

I am told how to use the till. I am shown how to open the doors in the morning – give it a kick, yes! – and lock them again at night. I am taught to recite the company mantra, and the six-digit code for the alarm system. There are lessons in communication:

I am the purchaser and you are the shopkeeper.

Excuse me, could you tell me where the historical fiction section is?

Certainly, and can I interest you in a life-long membership, or for just five pounds more an eternity membership?

Here is a bag to carry it.

I do not need a bag.

After that, I am permitted to interact with real purchasers. I stand in my appointed spot, between World Conflicts and Alternative Religion, and sway minutely as they pass, like seaweed wafted by slipstreams.

Can you help me? they ask. I tell them I will do what I can.

In an interactive meeting we practice our selling postures – it’s all in the shoulders, almost! – and how to lift with our knees. There is no sole instructor, everyone takes turns teaching, consulting manuals on company protocol during tea breaks. There is a manual for everything, heavy, impregnable, decades old and dusty.

The meetings take place first thing in the morning and last thing at night. It isn’t obligatory to attend but there’s a strong feeling amongst the colleagues that something unimaginably terrible might happen if we don’t. We make nervous jokes about what’ll happen if we’re late. Nobody is late.

I haven’t had any for almost a week. My world is small and manageable. Every problem has a corresponding solution that may be found between the pages of a manual, or in a colleague’s mouth. Time moves with the satisfactory click of routine. My SPM is the highest in the shop. Life has never been more cogent. My mother calls me one day after service.

Will you come over this weekend for lunch?

Only for an hour. I’ll drive you here and back.

I don’t really eat anymore, I say, thinking of the microwaved pouches. Not in the normal sense.

Your father misses you.

Yes, but you know what I mean.

You’re good to me, she says, but only out of habit.

There is a wedding.

Two colleagues, it transpires, have fallen in love.

It is an unlikely setting for a romance, I say to a colleague.

No, it isn’t, says the colleague.

No, it isn’t, I say, and thank them for the correction.

The wedding takes place half-way through service and all the shopkeepers attend. I am one of a dozen bridesmaids, and the youngest at 29. The bride is plain, and sombrely dressed for the occasion in company colours. The groom is quite old; a revered member of the lower management team, with silken white sideburns and the deceased stare of a lifetime in customer service. He sports a pointy erection for the duration of the ceremony.

Purchasers wander in and out all the while, picking books and RP off the shelves, asking:

Does the marked price include the 25% discount?

Purchasers walk through the middle of the ceremony, obscuring the bride from the groom, the minister from the bride. Purchasers tug on the bride’s sleeve and ask complicated things about their rewards cards. Everyone agrees it is a beautiful service.

After the vows, contracts are produced and signed. The music is turned up to seven, and there is a definite party atmosphere. A bottle of warm fizz is thinly distributed into plastic flutes. The happy couple take the lift to Goods In to consummate their marriage and to deal with the delivery. Sales are up by nearly eight percent for a Tuesday and at closing time we form a circle and pat each other enthusiastically on the back, laughing raucously. The laughter is like screaming and the patting is like hitting, and it only stops when one colleague drops to the floor, exhausted. I am the last to break the circle.

You are really going places, Human Resources says. They have called me in the middle of the lunch break I haven’t taken. It is the first time I have heard their voice.

Where am I going? I say.

We are pleased with you. More than pleased, we are proud of you.

We are very, very proud.

And the words come to me like open arms.

You’re so good to me, I say. Where would you like me to go? 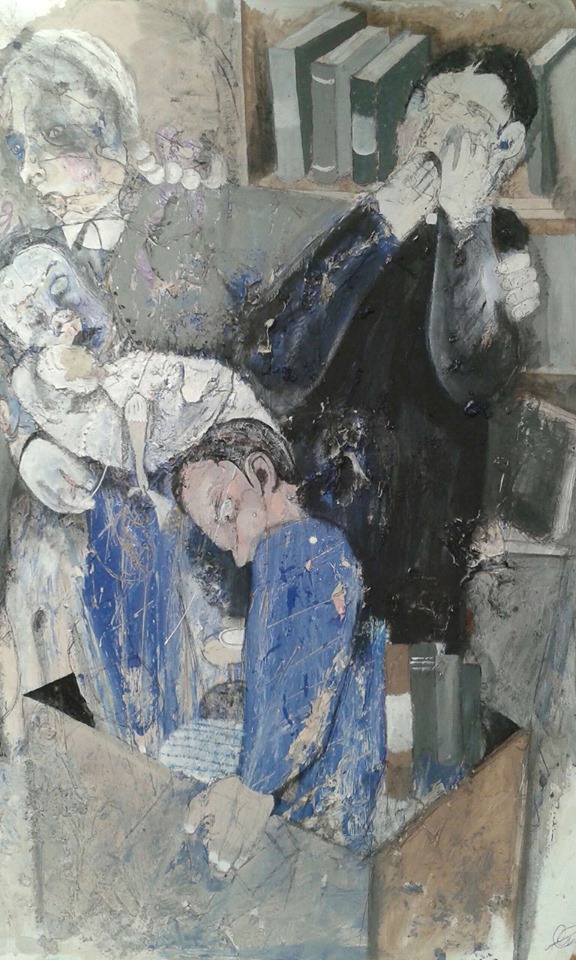 Kathy has a BA English Literature from Bath Spa University, and a Creative Writing Master’s from UEA. She has published short stories in magazines including, Litro and The Fortnightly Review, and won the Bath Short Story Award 2017. She lives in Shakespeare’s Stratford with her shopkeeper boyfriend. 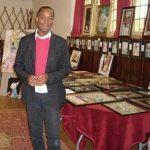 O’Neal R Spence is an artist and illustrator from the west midlands. He studied graphic design at Sutton Coldfield College, illustration at Hereford Art College, and art design at Stoke on Trent University. Spence creates his characters from lines and textured forms. ‘I work like a sculptor bringing forms and faces out of the chaos I see in the canvases.’ He is fascinated by Victorian dolls and puppets and lends this to his art.