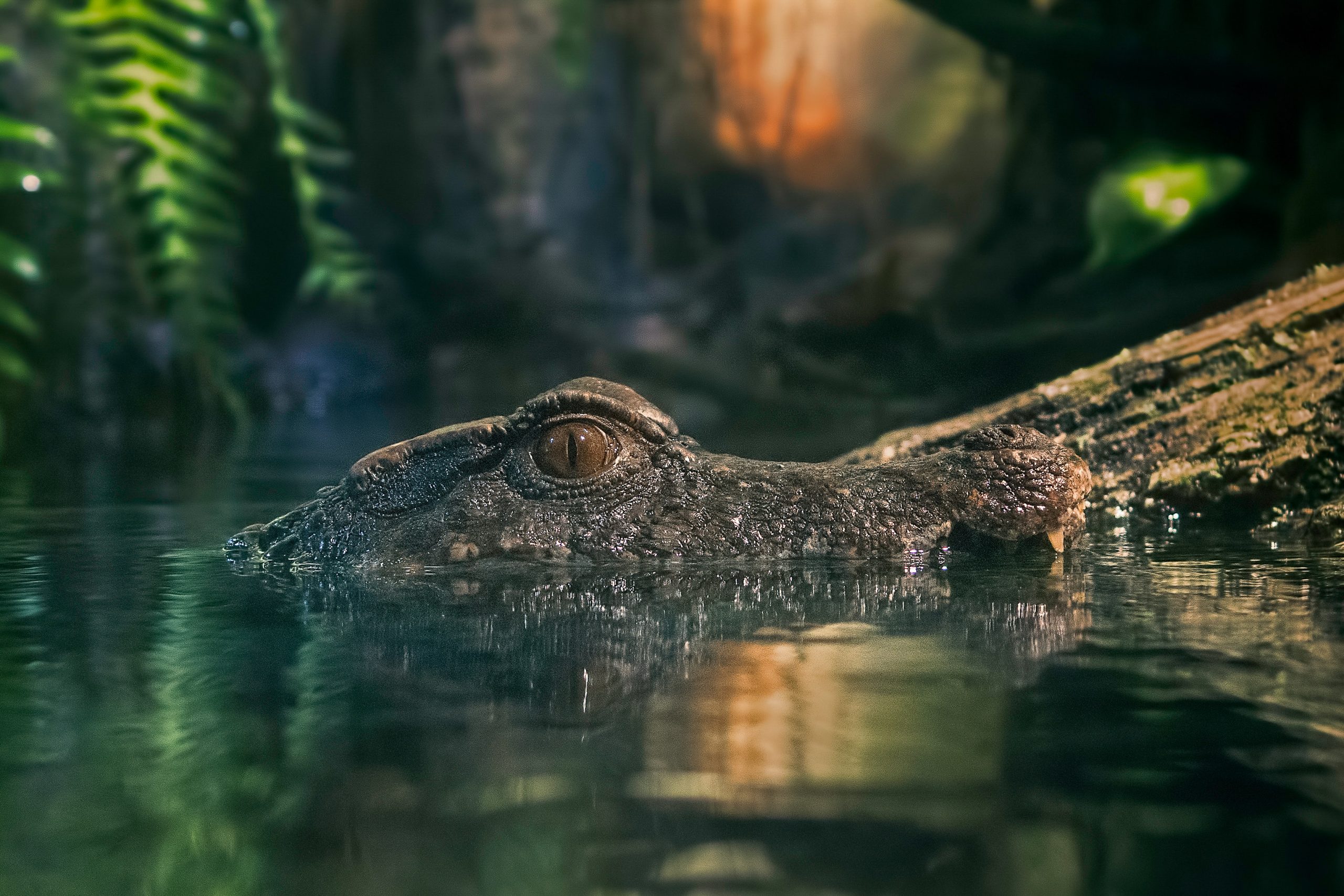 She’d walked along the beach for an hour that afternoon in the sun and rested up on the pier to lick her vanilla and blackcurrant cookie ice cream in a waffle cone. On the next bench, two pink- and purple-plumed teens with tentacled H.P. Lovecraft creatures tattooed on shoulders and thighs were speaking rapidly in sing-along French, luinesavaitpasmemefairecac’estunvraicochon! She wanted to eavesdrop, to join in, to ask them if they’d seen the crocodile everyone was talking about, but knew no French so lick-licked the soft gold cream, before it ran down her arm and dripped between the cracks of the wooden planks into the water below.

The teens got up, drawn to the call of the bongo drums beating out across the esplanade, leaving her alone with the incinerated hulk of the west pier, staring across at its burnt bones falling away into the roiling silver, while squally gulls glided, their arched wings shaping eyebrows in the air, as frothy wavelets curled and splashed over long, stepped groynes, like the crested tails of large lizards.

She wasn’t taking the escaped crocodile seriously, no one was. In the news reports, it was just one more mythical beast, not a razor-crunching reality. She wondered if the reptile would return to the sanctuary of the ocean, as its ancestors had in the dreamtime, when creatures that could fly flew up, and creatures that could swim swam down. The sea was a place where a crocodile could hide, where it could grow and shape-shift into whale or beaked turtle.

She too had washed up here, breaking free from the silent civilised city of smooth glass and cream stone that had been her long-time home. A chance to start over, to change. Slowly, the crocodile shaped itself in her mind: its barnacled pebbly hide, rackety teeth and polished garnet eyes, hidden there, beneath the shimmery surface of the Channel.

The multi-tongued sea taunted her with the impossibility of transformation, that her story, at forty, was already mapped out like a nautical chart, that she was settled in shape like a stone on the beach, that she could not shed her crabbed skin, that she would remain in hues of sandy orange, mottled grey, chalk white and charcoal, as far as the eye could see.

“I’m hard and dry, as fixed as rock, when what I want most is the turquoise lightness of water.”

Sun further west, sea further in. It was a shock to find someone had sat down next to her. “That’s the sea for you. It’s slippery, it seeps into your cracks and takes you unawares.”

A noble profile; skin the colour of kelp, eyes pale and glinting, like the albino fish she’d glimpsed once in a subterranean cave in Slovenia. Hair deep blond with a curl and carelessly pulled into a chignon on top of the head, eyebrows shaven, nails manicured, painted lavender. She wanted to look more closely at the torso wrapped in its cape but reluctant to stare, concentrated instead on the dark polished cane they were holding in front of them. On top was a small carved face like a netsuke, and as she studied it, saw it was not one face but two: the conjoined masks of leering comedy and cruel tragedy.

She looked up and saw the pale eyes on her. “I’m new here. Moved down from London during… well, you know…”

They were nodding, “I know.”

It seemed then  she fell into a trance, couldn’t describe afterwards whether they had talked an hour or sat in silence, hypnotised by the inning and outing of the tide, the slipping away of the sun, the pixilating shingle along the curve of the coast.

“The crocodile,” she said at last. “Has anyone found it? I mean a crocodile on the loose is a dangerous thing…”

She was astonished by the invitation, suspicious of it. “You’ve got the crocodile?”

“I have.” A whiff of humour, like the joke was on her. She glanced at the carved knob on the tip of the cane.

“…fractured my ankle and waiting to heal. Are you coming?”

She stood up and strode alongside her limping caped companion; had to run to keep up with them as they navigated the empty esplanade, the spaceship cars and troglodyte bicycles parked at Sea Life World, turning left then right, into the cheery lights of Kemp Town.

They stopped outside a low tavern with bow window where an upside-down naked doll hung, arms and legs all swapped around. The stranger knocked, with the twin-faced walking stick, on a door festooned in fairy lamps.

The door opened. A shaven-headed carnival gull in feathers exclaimed “Janus!” then darted a sharp peck at the She.

They entered a narrow, condom-tight cabin, that extended back to cellar stairs; walls throat-red and mirrors somehow liquid, a bright tank next to the bar flashed with the round gulping mouths and disk-shaped eyes of silver fish.

She felt mottled grey. An old stone you’d want to hurl into the flames of a fire.

A crowd flooded in to hug and shake Janus and finding herself separated she went to where a crocodile stood on its hind legs behind the counter, a crocodile with long dreads and hoofs for feet, a crocodile wiping a dimpled glass into which it poured sea water.

She took the glass and stared. Were those tiny plankton shuddering about inside? She lifted the beaker up to the light to see.

“It’s not spiked,” grinned the crocodile.

She sniffed, inwardly held her nose and swallowed, then looked around for Janus, saw them sucked down the throat into the cavern below. She followed, sank herself deep into its dark belly where the candles guttered and oddball chairs stood at mishmash tables, where the low ceiling dripped with fishing nets and swinging plastic lobsters; more mirrors, more fish tanks. She perched on a seat in front of a band of leathery pterodactyls as they struck up. Dream Tobacco sounded out.

Once I was a man and I loved a woman

Truly I believed that she loved me

Then some other woman came and stole my woman

Right away my life meant nothing to me…

The music, the dancing shadows, suggested the vast ancientness and newness of life; how she was floating in a bubble of time, then how time itself was stretching and spooling back to the pre-time, when crocs were dominant in the world drama, and then suddenly, she saw time flinging its tentacles up to the stars like a giant squid, up there, where one day spaceship arks would soar, seeking sanctuary, to build a home somewhere else, from which to watch the dying earth.

The pterodactyls played on.

Someone hand me down that opium pipe

Oh dream tobacco take me away

Where there ain’t no memories to lead me astray

Where I can hear sweet music the lived long day …

She sipped her drink, pausing to decide whether it was Elderflower or Kombucha. The dancers, some lean and lithe, others ponderous, were lurching and skidding on the froth of beer and seawater. There were tails; there were horns, and there was Janus, throwing off their cape, caught by a long-snouted toothless iguanodon in mulberry red who wrapped it about themselves. Janus had lost their cane, was dancing limp-free, healed by this flirtation with water.

“Who takes your fancy?” asked a proud stegosaurus in lazy drawl, wearing Lycra cyclist tights, not looking at her but lost in their own reflection in the mirror, gaze enchanted by what they saw.

A snort as they pulled away from the reflection, glancing at her.

“Where is he, then?” Eyes working the room.

Eyes returning, settling on her, like a surprise find.

She shook her head again and took another sip of her drink.

“A what?” Stegosaurus quizzical, wondering if she was meat.

A whoop, as a shower of light and dead stuff fell from the ceiling, making the cavern snap and gurgle and laughter rippled out, catching Janus, her crocodile, swimming towards them in its current.

“I knew she’d fit right in,” they were saying.

In an instant, the cavern erupted into sprays of bubbles and she was paddling with Janus, singing the song of Dream Tobacco and everything boundless and boundary-less, and it was obvious that her shell was pierced.

Later, when she thought back, she remembered a tale from her childhood: the one about a Fairy Queen holding court in a big empty house, who invites two musicians from the human world to entertain her guests for the evening. They play their fiddles and stay 200 years, though they think they’ve been playing for only one night. When they leave, they catch up with human time and disintegrate, blown away by the wind. She worried that the same might happen to her, that finding herself so changed she might not survive in both worlds.

After the asteroid crash and the opening of the oceans, she crawled out of the cavern and along the esplanade, back to her own neat home, back to the cat waiting for her, and she knew she was diversified, changed from rock to croc.

But the next week, and every week, she tried to locate the bar in Kemp Town with the sea inside, but she never managed it. Perhaps they were all swept away by the outgoing tide, dissolved in the morning sun, perhaps they had been lost for eternity, like the escaped crocodile.

Deborah Nash is based in Brighton and has had an eclectic range of employments from fish n’ chip shop and factory floor shoe-picker to community artist, sub-editor and now writer. She has written 12 children’s books and is a regular contributor to The Wire, Selvedge, Londonist, and France magazine, among others. She was prize-winner in 2020 for the YPPT script-writing competition for a puppet play, longlisted for Emma Press picture-book call-out 2020 and her short stories appear in Litro, Stand magazine and Ambit.