For Bowie And For Spurs

I’ve never noticed Bruce Grove on the tube map before; almost tucked away from view in that maze of north-eastern Overground lines, like a pen in a shirt pocket. Depending on how it’s pronounced, Bruce Grove could sound posh, tough or even camp. It could be all things to all men.

The station itself is surprisingly well preserved in its original High Victorian design. All ornate wrought iron and white wooden latticework – very My Fair Lady. Back in the late Victorian/Edwardian era, following the building of the Great Eastern Railway Enfield Branch, this ward of Tottenham had indeed thrived.

As I leave the station in search of the High Street, the words “BRUCE GROVE” appear in gigantic bold white letters on the side of the railway bridge – just in case anyone’s in any doubt as to where they are.

It’s only approaching 5pm but the winter sun has long since vanished and the sky above is midnight black. The cars are bumper to bumper, their lights glaring brightly against the abnormal dark of the evening. Their engines fill the crisp air with pungent exhaust fumes. I walk briskly down the street, which in comparison to the roads, is deserted. 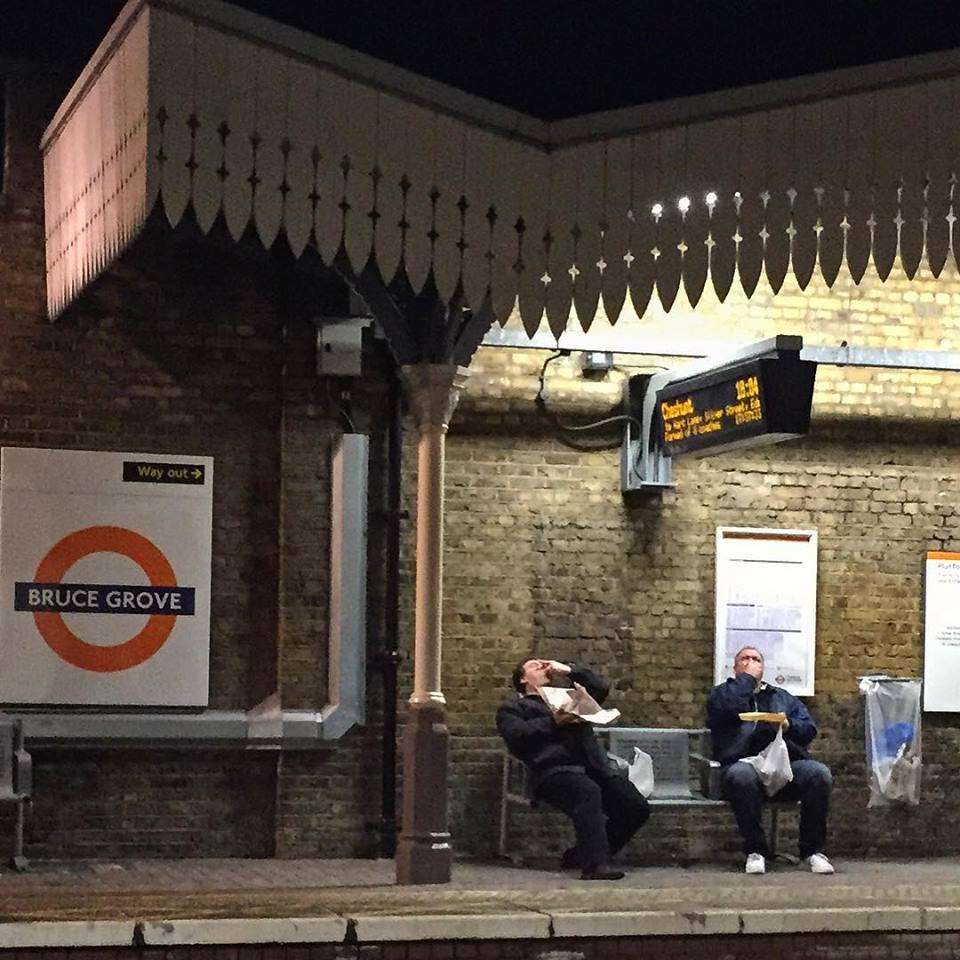 ‘Where is everybody?’ I wonder. The cold is starting to make me shiver and annoyingly I’ve forgotten my gloves, so I stuff my hands deep into my pockets and walk as quickly as I can, in that busy and determined way that not only keeps you warmer, but also puts off strangers from approaching.

I keep my eyes fixed on the shops. You can always tell how a London borough is doing by the briefest of glances at its High Street. I have vivid memories of my parents discussing the sad decline of Leytonstone where we lived during my childhood and which, like many less well-off areas, suffered badly under Thatcherism.

Much to everyone’s dismay, the decent shops all started disappearing and were replaced with poor imitations. Sainsbury’s was replaced by Iceland, BHS was replaced by Mark One, while a cluster of ‘£1 Pound and Fifty Pence’ shops sprung up, nestled in-between charity shops and deeply ironic slot arcades, where people could waste all that money they didn’t have. Russell & Bromley put up a particularly brave fight but their dwindling trade must have eventually been deemed unacceptable by head office and finally they left too, taking with them a stuffed tiger rug that I had adored. Whenever we went shopping there I would lie on the tiger rug and stroke its head, talking to it, telling it secrets. I would even wave to it when we walked past outside. The next unwelcome arrival was a giant McDonalds, complete with Drive-Thru. “No you can’t have a McDonalds” became a familiar saying around our house. Then the spacious Post-Office disappeared only to reappear as a window stuffed ignominiously down the back of a newsagents. There’s no such thing as society. The final straw was when the council announced plans for the M11 link-road which would turn Leytonstone into a building site for years. “We’re not living on the edge of a fucking motorway! We’re moving!” my dad had declared. And move we did, only one tube stop up to Wanstead, but what a difference one tube stop in London can make. It had felt like a galaxy away.

Walking down Bruce Grove High Street now feels depressingly familiar to the down-on-its-luck Leytonstone of the 80’s that I had known. I tick them off as I pass by; there’s a Poundland, a pawnbrokers, a mobile phone unlocking shop, Milano shoes (no genuine leather visible), Prestige Designs (featuring an alarming number of white tuxedos), a Kebab Takeaway, a Nail bar, a Unisex Hair Salon (full of Asian men having their hair cut by other Asian men), a budget homewares store, an improbably gigantic Aldi, and an EasyGym (no membership required). I wonder what kind of shops had been there before these cheap fixes had arrived.

A quick Google search on the area revealed that The Lottery Heritage Fund has recently awarded Tottenham and Bruce Grove £1 million to improve the face of its High Street and restore some of the beautiful old buildings from its heyday. Good for them, I think. Everyone wants to feel proud of where they live. It’s about feeling proud of yourself. 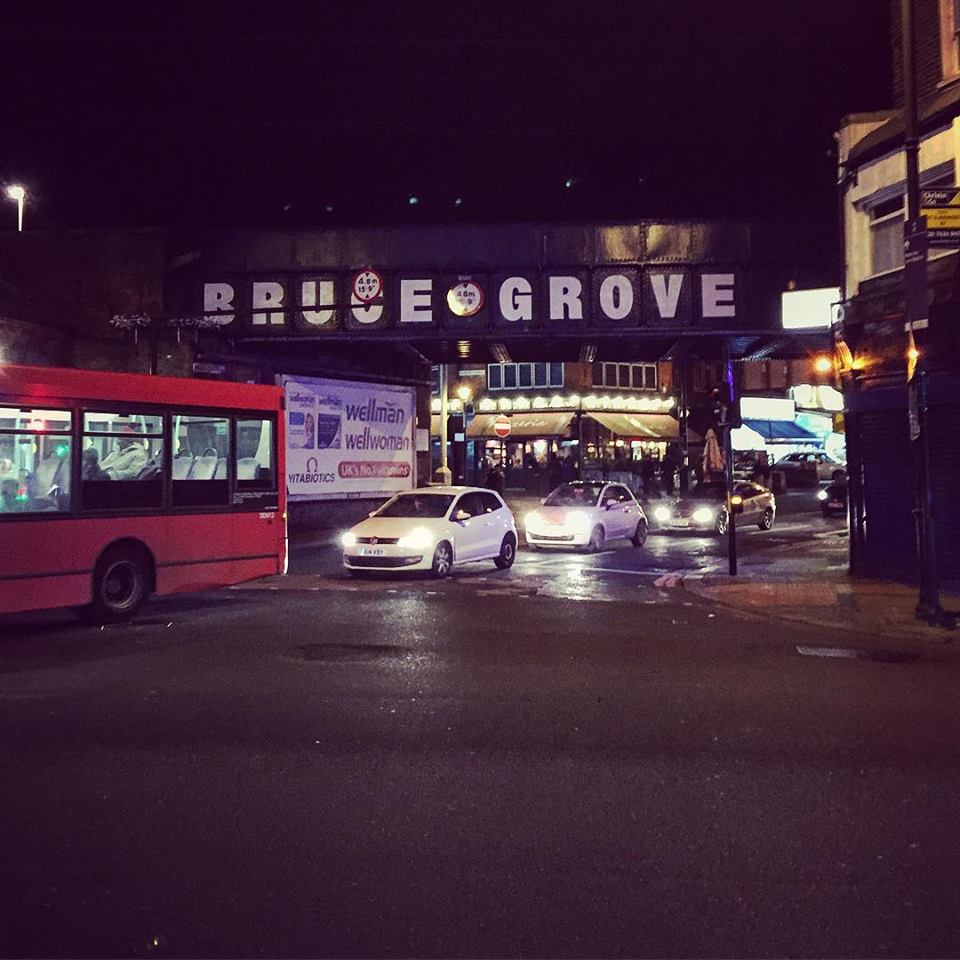 Without warning the shops just tail off and I can’t see anything up ahead except a great expanse of darkness, so I turn down a side street that curves to the right, revealing a row of charming Victorian cottages that change the landscape entirely – more echoes of the characterful Bruce Grove of yesterday. Another ‘Unisex Hair Salon’ was positioned just before the cottages, full of young black men having their hair cut by other black men. I wonder if anyone around here ever trusts anyone who’s not of their race to cut their hair? Going on this evidence – the answer is apparently not.

Suddenly I can hear that distinctly male chorus that means only one thing: the football is on. “You’re nothing special! We lose every week! You’re nothing special! We lose every week!” a man in a tracksuit is shouting down his mobile phone. He has a handful of friends behind him and they’re singing the same thing too, all completely out of time with each other. A hush descends as I walk past and my stomach muscles tighten nervously as they whistle at me. My forced smile says “in your dreams mate” and I glance into The Victoria pub where apparently all the white men of Bruce Grove are hiding.

“Alright darling?” one of the men leers at me while hanging off the pub steps. He’s just close enough for his stale breath to hit my face as I walk past; whisky blended with beer and cigarettes reeking of a desperate loneliness I want nothing to do with.

I run to the corner of the street to get away from them, and as I approach the end of the road I realise I recognise the music that’s blasting from the house on the corner: Gregory Isaac’s reggae classic ‘Night Nurse’. Something about his smooth tone and the sheer volume it’s playing at calms my nerves.

On closer inspection it’s not a house at all, it’s a pub, except it has boarded-up front windows and a cheap board for a front door. ‘The Two Brewers’ is written on the outside in old-school pub lettering and it has certainly been a public house at some point in its lifetime, but what the hell is it now – a youth club? There’s a group of young teenagers smoking outside, two boys and two girls. They’re all wearing colourful Nike trainers and hard expressions. They seem to belong to the place.

“Any good in there?’ I ask as nonchalantly as possible, nodding in the direction of the house.

“Yeah it’s wicked!” replies one girl with long blonde hair. She’s swigging from a can of beer and looks about 15.

“What are people celebrating?” I ask.

She widens her eyes, scoffing at me and takes a drag on her cigarette.

“You don’t know? Spurs won 4-1, innit! They only open this place when Spurs play.”

I eye up the boarded-up front door again and think ‘just bloody well go for it’, so I push it open and step inside. I’m immediately met by a wall of pasty middle-aged men, who have all swung around to inspect whoever was coming through the door: me. They look me up and down, their expressions clearly baffled. ‘Fuck. Why am I doing this?’ Immediately I’m regretting walking in here alone. If I had been able to see from the outside that it was full of men, like The Victoria down the road was, I would never have gone in. Generally, the perceived wisdom on female safety is that you don’t walk into a pub full of men if you’re out alone in London; that’s sadly known “asking for trouble”.

‘You don’t look like you come from round here’ says the voice in my head, sing-song sounding now, which means I’m close to panicking. The room is so rammed that I can’t even see the bar, yet I sense that acting overwhelmed and staying frozen to this spot would be a very bad idea. It crosses my mind I could just turn around and walk straight out but that’s too much of an admission of fear, so I quickly set sail with purpose across the room, weaving my way through clusters of male Spurs fans, in what I pray is the right direction.

Thankfully I’m not wrong, and – hallelujah! – there are even women this side of the room too. I smile gratefully at the twiglet-thin elderly barmaid. Her dyed brown hair is tied up in a high ponytail, secured with a bright pink scrunchie, while her fringe sits freshly-trimmed and bouncy over a face clearly ravaged by decades of smoking and drinking. Her cheeks are as sunken as Mick Jagger’s. I order a glass of red wine, which I instantly regret as she opens a mini-bottle and pours it into a tall glass, making it look like very potent Ribena.

I turn around with my back to the bar and just stand there for a while, smiling as warmly as possible, sipping my Ribena, wondering whether I can pass for a Spurs fan. Never mind that I’m dressed head-to-toe in black with smart leather boots on and not a sportswear brand in sight.

On the other side of the room, people are huddled around a mini jukebox deciding what will follow the success of ‘Night Nurse’. There’s a couple of seconds pause and then suddenly, the unmistakable opening chorus of “Ahhhhhhs” from David Bowie’s ‘Let’s Dance’ fill the room. There aren’t many times when you can say “the room erupted” without it feeling clichéd, but really, the room erupted.

The passing of Bowie just days earlier and the immediate triumph of Spurs winning 4-1 was apparently suddenly too much for everyone – and they all start embracing. “Put on your red shoes and dance the blues” orders Bowie. The men slap each other’s backs, cheering and growling as they do. Then the women join in, their voices adding a higher pitched cooing to the proceeds.

The next thing you know there’s beer flying everywhere, as the men grab the women and the women grab the men. I stand at the bar, transfixed by what I’m seeing and baptised in an assortment of alcoholic drinks, no longer afraid of my surroundings.

I decide to leave while the going is good though and I hand my glass to the barmaid, who by now is beaming too. Before I walk out the door I take one last glance over my shoulder. The men and women of Bruce Grove have all locked arms and are rocking back and forth as they sing their hearts out, eyes glistening. For each other, for Bowie and for Spurs. 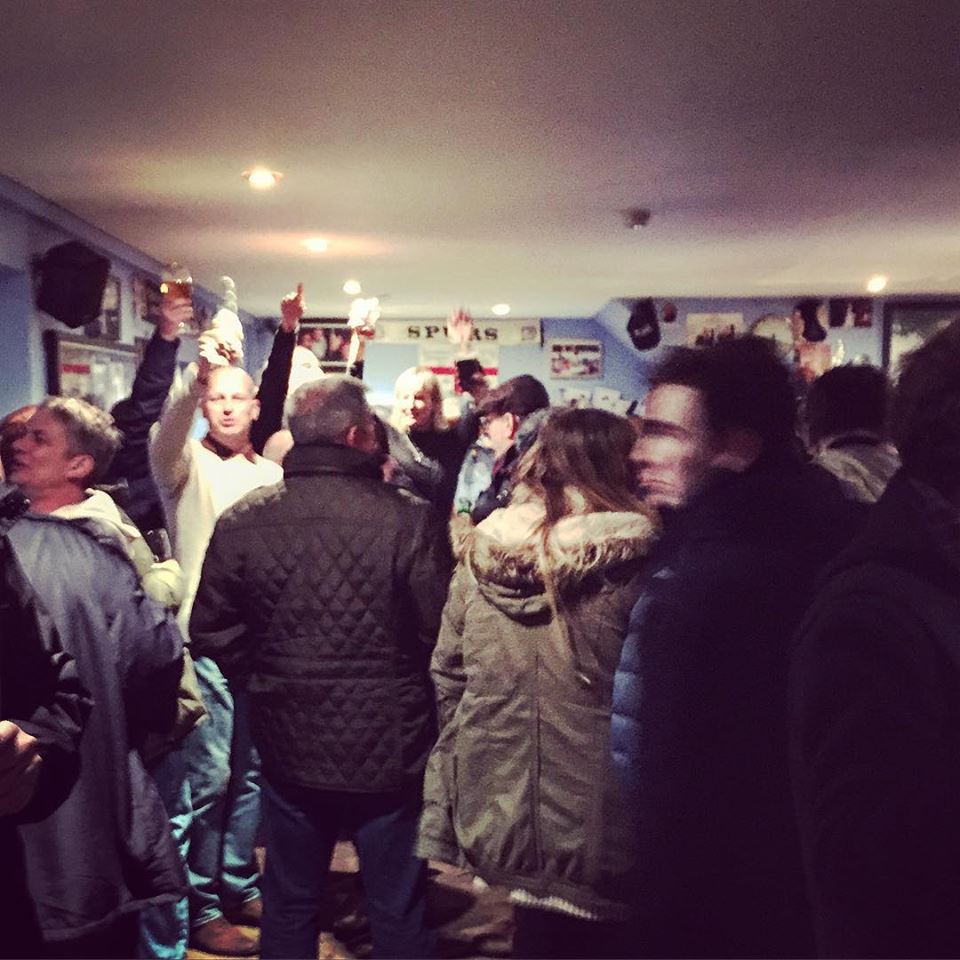 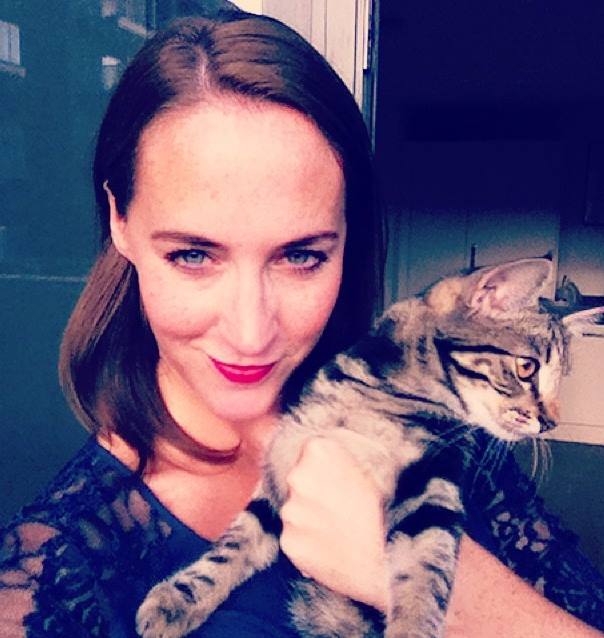 Elizabeth studied English at Cambridge and now, fifteen years later, is studying for her MA in Creative Writing at Birkbeck. She lives and works in her hometown of London as a Creative Copywriter in the advertising industry. She spent 8 years in Berlin and travels regularly. This is her first published piece of creative writing. It's the result of a class assignment where the students were asked to go to a tube stop they'd never been to before, get out and walk around.