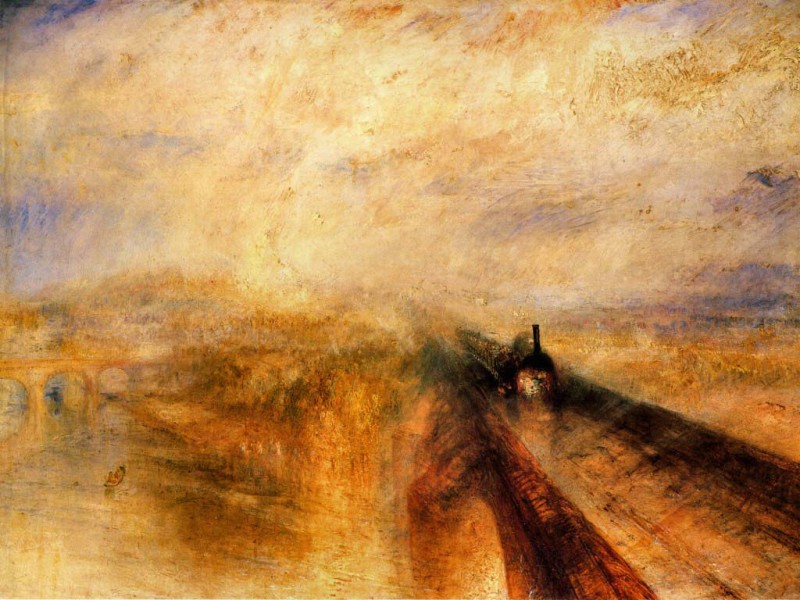 Sarah was in a deep sleep when the sound woke her. She struggled through a fuzz of residual dream to remember where she was, at what time and on what day. Her flailing hand found the source of intrusion, her mobile — the work tone. The bright screen swam into focus. It was two thirty-five. Sunday morning.

‘Sorry to call so early,’ said an apologetic male voice.

She must be dreaming. ‘Intruder?’ She pinched her cheek with her free hand. No, she was awake. ‘You’ve got the wrong person. I’m a conservator. Call the police.’

‘It’s embarrassing, Ms Trugold,’ said the voice. ‘He got past our systems, you see. We don’t want to make it official until——’

‘Mr Fergusson, if you can’t convince me in one short sentence why you need a conservator at two-thirty-something on a Sunday morning, I’m going back to sleep.’

‘He was painting on the big Turner in Room 34, the one with the train.’

This took a while to sink in.

‘You mean Rain, Steam and Speed?’

‘What exactly do you mean, “painting on the Turner”?’

‘He’s a strange one, Ms Trugold. He didn’t struggle or make a fuss, not like the usual nutcases. He’s dressed like an artist, all the kit and everything, and he just stood there… painting… on the Turner.’

‘So, you want me to check the damage?’

It was intriguing. An artist? But who would——?

She took a deep breath. ‘The intruder, Mr Fergusson.’

‘Ah… He calls himself the Art Master, Ms Trugold.’

‘The Art Master? Okay. You’ve got me. I’ll be there in fifteen—— Make that twenty, minutes. ‘

‘Two things: One — have an enormous, strong, black coffee with two heaped sugars waiting for me. Two — for Christ’s sake call me Sarah.

They’d made their intruder at home in the control room. There he sat, surrounded by CCTV screens and security officers, with his palette and a box of brushes at his side.

Nearby in Niall’s office, while gratefully downing her coffee, Sarah observed the Art Master on another monitor. In dark, paint-smeared clothing, with a crumpled silk scarf knotted around his neck, he looked the archetypal image of an artist.

‘I wonder where he’s art master?’ she said. ‘Some private school or college, maybe?’

‘No idea,’ said Niall. ‘He doesn’t say much, and when he does he talks in riddles.’

In Room 34 the lights were on and a whiff of fresh turpentine hung in the air, like a high-pitched note accentuating the familiar bass line of polish and age.

Sarah knew Rain, Steam and Speed like an old friend although, with its secure pedigree and provenance, she’d never had cause to examine it forensically.

At first glance the memorable image appeared unchanged but the smell of turpentine grew stronger as she approached and, when viewed from an acute angle, she could make out a sparkle of fresh paint on the front of the locomotive and around the carriage wheels.

But why would some artist risk breaking into a secure gallery to——? Indeed. ——To do what? And it appeared he hadn’t broken in.

Sarah examined the affected areas of the painting with her strongest magnifier, under portable white, UV and infrared lights. She took minute samples of paint and then retired to her workroom to consider her findings.

Back in Niall’s office Sarah glanced at the Art Master on the monitor. ‘Anything new?’

‘No. I’ve raised more questions than answers. He hasn’t damaged the picture in the usual sense. In fact the over-painting looks more like restoration. He even used pigments contemporaneous with the original.’ She glanced at Niall, as if reading his expression. ‘What?’

‘There’s something you’re not telling me.’

‘Come on, Niall.’ The penny dropped. ‘This is the embarrassing bit you mentioned when you called me, yes?’

Niall nodded. ‘We needed to know how he got in. There’s no sign of forced entry. He’d triggered no alarms. There’s no prior trace on CCTV. He simply appeared in Room 43, painting.’

‘Your guards saw him there?’

‘So you keep the lights on all night?’

‘No, we switched them on later to investigate. We only have pilot lighting on at night, to save energy.’

‘So how could he see to paint?’

‘That’s not the embarrassing bit, surely?’

Niall was toying with the empty cup on his desk, avoiding her gaze.

‘We were desperate. Some of the boys leant on him a bit. Look, it’s my job at stake here. Please don’t report me.’

‘I’ll reserve judgement until I know the truth. What did the Art Master tell you?’

Niall mumbled something Sarah could barely catch. She chuckled. ‘Come on Niall. You can’t be serious. Have you been on the gravy? Tell me you didn’t just say “time machine”.’

Niall gave her a puppy-eyed, pleading look and shrugged. ‘That was what he said. He came in a time machine.’

‘Okay, Niall.’ Sarah sucked in a deep breath. ‘Give me a large slug of whatever it is you guys are on and let’s begin again.’

She gave him a searching look. ‘Right. I’m sorry, Niall. I had to know for sure.’

‘Do you know Occam’s razor, Niall?’

‘Which gallery is it in?’

Together they studied architectural drawings of the Gallery. Extensions had made some original doors redundant but CCTV and alarms covered all the others.

‘I’m beginning to wish you didn’t stick to the no alcohol rule so strictly,’ Sarah said. ‘Let’s get him in here and try a gentler approach. Humour him perhaps?’

‘You watch too many old movies, Niall,’ she said. ‘Okay, you’re bad cop, but go easy. He looks fragile.’

The Art Master shuffled into Niall’s office and lowered his frail body into a chair.

‘I know you from somewhere?’ Sarah said. ‘Have we met before?’

‘Beggin’ yer pardon, Miss, but that’s not likely,’ he said. His accent was from London somewhere, an area she couldn’t tie down, almost rural, and surprisingly course considering his artistic appearance.

‘Enough time wasting,’ said Niall. ‘What are you after, Mr Art Master? A political statement is it? Publicity for some kind of pet cause, perhaps?’

‘Not Mr, just Art Master if that’s all right by you, sir,’ replied the Art Master. He was staring at Sarah. ‘Publicity? You mean like them Suffragette’s get in the newspapers when they blow things up or destroy paintings? Nah, not me, don’t destroy things, me. Not my way.’

Sarah pulled up another chair and sat looking deep into his eyes. ‘Tell me about your time machine, Art Master,’ she said.

”Taint my machine, Miss. ‘Tis the Science Master discovered it. He should rightly take the blame for everything the boys done. I’m only here to make it good, see.’

‘Well I think you’re a vandal, Mr Art Master,’ said Niall. ‘Who is this Science Master and these boys you’re trying to shift the blame onto? I think we should call the police.’

‘Let’s not be too hasty,’ said Sarah. ‘Why don’t you give us more detail about this time machine? How does it work?’

‘I don’t rightly know, Miss. Anyways, I’m not supposed to tell, see. All I know is it’s a Wells-Edison model, accordin’ to the Science Master.’ He shrugged. ‘With special modifications, so he says.’

‘Bollocks — Excuse me, Sarah,’ said Niall. ‘I’m calling the police.’ He reached for a handset on his desk.

The Art Master placed a cadaverous hand over Niall’s. ‘Don’t call the peelers, sir. Please. I’ll never get back and there’s work to do… It’s for the boys, see?’

‘The boys who painted graffiti on——’ Sarah glanced across at Niall, her eyes pleading. ‘——On Mr Turner’s painting?’

‘Yeah, it’s them and all the others what gets so bored. They’re still kids, see? No harm in that. We try to keep ’em out of trouble, but when they gets into mischief, well, we makes it good.’

‘If you can tell us the names of these particular boys, that might help,’ said Sarah.

‘I’m honour bound never to speak their names, Miss.’ He glanced at Niall with fear-filled eyes. ‘But I’ll write ’em down if you’d promise to destroy the note straight away.’

Sarah made a small sound deep in her throat. She whispered something.

‘What was that?’ said Niall.

‘I quoted from a poem called For the Fallen, by Robert Lawrence Binyon ‘

Sarah cleared her throat. ‘They shall not grow old as we grow old…’

The Art Master smiled, nodding. ‘Do you mind if I go for a little stroll now, Miss.’

‘Of course not,’ said Sarah.

The Art Master rose from his chair and shuffled toward the door.

‘Are you serious, Sarah?’ said Niall.

‘Do you want to explain this to the trustees?’

Niall shook his head. ‘No.’

‘Would I be correct in assuming you met these boys and their time machine on or by a railway bridge over the Thames, somewhere near Maidenhead?’

As the door closed behind the Art Master, Niall led Sarah through another door into the control room. They observed the man’s slow progress down several dim corridors until he turned through a doorway.

‘Mr Fergusson,’ one of the security guards shouted, ‘that door’s blanked off. It doesn’t lead anywhere.’

‘Really?’ said Niall. ‘Must be a glitch on the camera system. Clear the camera memory.’

‘Clear the whole memory? Are you sure?’

‘Yes. And then switch the system off and on again. That should fix it.’

Niall and Sarah were sipping coffee in his office.

‘How did you know?’ said Niall.

‘About the Art Master you mean?’

‘Take a look at his self-portrait in the Tate someday. It’s like an Identi-Kit created by a master, as of course it was.’

‘And the graffiti? How did you spot that?’

‘I’ve always wondered about those dodgy carriage wheels. When I looked closely I saw someone had written Whoooooooooosh, underneath the carriages. It was only the over-painting that made it into wheels.’

‘And then there was the front of the engine and the smokestack. They’re crude by Turner’s standards. He’d over-painted that too, you see.’

‘What’s under the paint?’

‘Ah… There are so many layers of over-painting. It’s probably been happening time and again over the years. So we’re never likely to find out unless it’s with X-rays or infrared reflectography, but I’m guessing there’ll be something like a tall blue box with a light on top.’