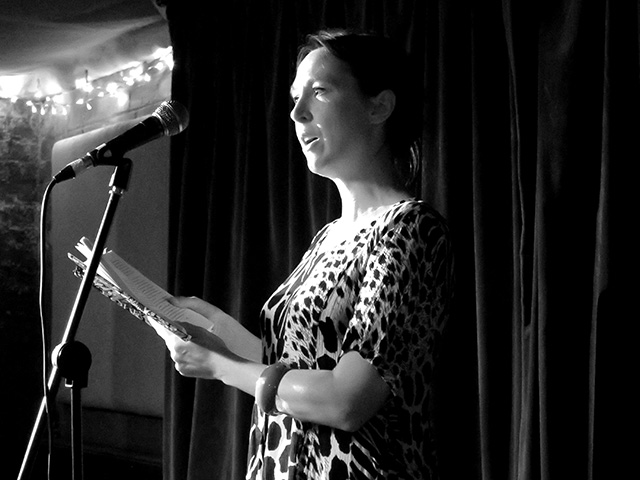 Identity, inequality and chickens at our Summer MIRLive

July’s MIRLive was an exciting event with a set of readings presented by some excellent performers. Several readings chimed with thematic links, touching on identity, inequality, powerlessness and surprisingly frequent references to chickens!

In fact, Miki Lentin’s story was called “Chicken House” in which the narrator and his lodger have rescued battery chickens and set them up in a chicken house at home. Through sparse dialogue the lodger’s situation as an asylum refugee becomes apparent, and his tenderness and concern for the chickens hints at his own traumatic journey and vulnerability. Miki’s measured, clear delivery allowed the audience time to absorb the subtext and to gain an awareness of the suffering and gravitas behind the gentle co-operation of the two men.

Sogol Sur’s performance of her poem “Inheritance” was a dramatic contrast, dynamically portraying turbulent emotions. We were told of a “motherless woman in your twenties” tussling with grief, fear and an obstructive bureaucracy that leaves the girl feeling her identity and status are under threat. It ended with the powerful lines,

“Take off your fake hijab…

You’re not meant to exist.”

It was a further treat to listen to Arhondia’s story “Athenians” in which she drew on her Greek roots to deliver authentic, vivid dialogue. This was sometimes comic but ultimately warm and sensitively conveyed. The encounter with the young man forced by austerity measures into the indignity of bin diving was both convincing and thought- provoking.

Before the break we heard from Valentine Carter whose story “Why make do when you can make art?” contrasted with the styles of the other pieces in that its narrative took a surreal turn of direction. Starting with a description of a sandcastle competition, the story developed through imagery and carefully selected details, transporting us through the ocean. We experienced what was perhaps a little girl’s fantasy, skilfully told.

Refreshed by drinks at the upstairs bar we returned to the cool basement, ready to hear the last three acts. Rushika Wick delivered her poem “Halal Store- we mend Phones” with a gentle tone which belied the violence touched upon in the poem. Economically, and extremely effectively the poet conveyed a sense of two contrasting cultures, of a refugee fled from war, “now consoled by Yorkshire tea/ No avalanche apart from racist jokes you don’t get.”

Anita Goveas followed this poem with a reading called “Outside In.”  This was a flash fiction mosaic derived from her dreams and jigsawed together to produce an interesting and moving piece which conveyed childhood feelings of powerlessness and displacement, in-keeping with the evening’s themes.

This led us to our final reading by our headliner Zoe Gilbert whose book “Folk” works as both a set of short stories and as a novel, in that the stories are inter-linked. They take us through a generation of folk who live precariously on the enchanted isle of Neverness, where adolescents like Madden and Hark experience rites of passage and move into adulthood. Neverness is a weird place of loss and longing, where sexual yearning is fraught with violence and danger, engendered by traditions and customs and the savage nature of the landscape itself. Zoe’s prose is lyrical and exciting and left the audience wanting much more of her “True tale of Jack Frost” in which the peverse jealousy of a mother and sister has disastrous consequences. Zoe’s reading was certainly a delightful end to an inspiring evening.

Our next MIRLive event will be a Mechanics Institute Review special, where we will hear extracts from stories that have been published in MIR 15. All are welcome!