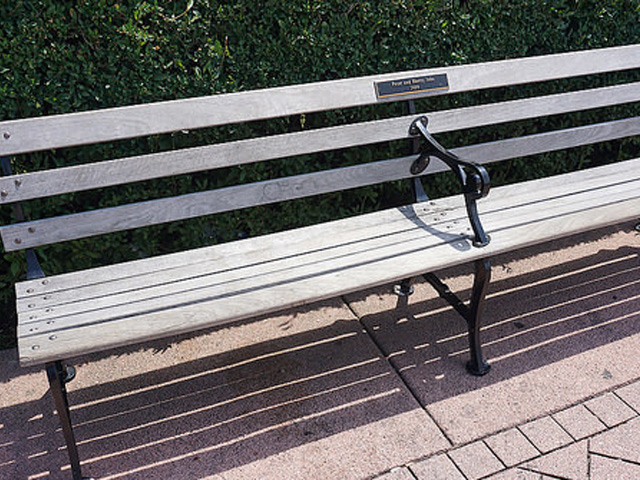 In Memoriam by Martin Wakefield

As I left for work one morning there was a wooden bench on the pavement outside my house: a substantial solid wood park bench which hadn’t been there the previous evening. I guessed that a neighbour was having it installed in their back garden. But when I returned that evening the bench was still there. And I noticed that it was bolted to the pavement.

‘For sitting on,’ she said.

I went outside. There was a brass plate screwed to the back of the seat: “In memory of Martin Wakefield, who liked to sit.”

‘Who liked to sit? What does that mean?’

‘That you liked to sit.’

We had finished dinner and were watching television – a Northern European police procedural – but I couldn’t concentrate.

‘Sit? Just sit? Or have they missed off some words? And watch the world go by? And think?’

That night I found it hard to sleep. They only dedicated benches like that to people who’d died, didn’t they? Who thought I was dead? Who thought I needed to be remembered? My parents? My siblings? An old friend who’d lost touch? And I had a presentation to the board tomorrow which I hadn’t yet written, an appointment with my GP to arrange.

Why had they placed the bench outside my house? I tried to think of more appropriate places, places I liked, places where I had sat and enjoyed the view, or thought, or read. But none came to mind. I don’t sit outside very often. I don’t particularly favour views. I tried to think of some that I could even remember. The view of our tiny garden from my bedroom window as a child, the playing fields from the school hall, the balcony looking over the Med on our honeymoon, the corner office overlooking The Thames when I was promoted? We walked on the Heath occasionally, we had seen and remarked on similar benches up there I’m sure. I sometimes went to Rainham Marshes but that was looking at birds rather than views.

‘D’you think it’ll get in the way?’ I asked my wife the next morning.

‘People will get used to it,’ she said.

And indeed, as I left for the office, there was a woman sitting on it adjusting her shoe. She stood and nodded at me as I closed my front door.

It was difficult to concentrate at work; I kept thinking about the bench, about the words, about who might have placed it on the pavement outside my house and why. Was it a threat? Was it a tribute? I could come to no conclusions. On the way home I stopped off at The Lamb. I told myself I fancied a drink but at the same time I knew I was not quite prepared to see the bench again.

I got a little drunk. On the way home I stood by the bench for a few seconds before tentatively sitting down. I asked myself how I felt. And, if I’m honest, I seemed to feel very little. I stood up and went inside.

That night I awoke before dawn. I stood at the bay window in our upstairs living room and looked out. The street lamps shone a fine orange light on the bench. It seemed to glow but then again, everything seemed to glow in that light. A fox trotted up the pavement opposite before disappearing over a wall. I had an urge to take a blanket outside and lie down on the bench until morning, but, instead, I made some coffee, and sat at the back of the house in the dark.

My wife came down at seven.

‘If you’re so worried about it, why not get it removed?’ she said.

That idea had not even occurred to me. Of course I can, I thought, it’s my house if not my pavement, I have a right. And after that, the bench took up less time in my mind, and when I did think about it, I didn’t feel the anxiety I had felt before.

And my wife was right. We got used to the bench and stopped noticing it. It was convenient for us to put down shopping there when searching for the front door key. The bench weathered and took on a greenish patina, became covered in graffiti. Pensioners rested on it on their way to the Post Office. Pigeons liked to peck around its legs. Kids used it to practise their slides and grinds. The brass tarnished so the words were difficult to make out. And one morning I noticed that someone had unscrewed the plate, leaving a small rectangular area of clean polished wood.