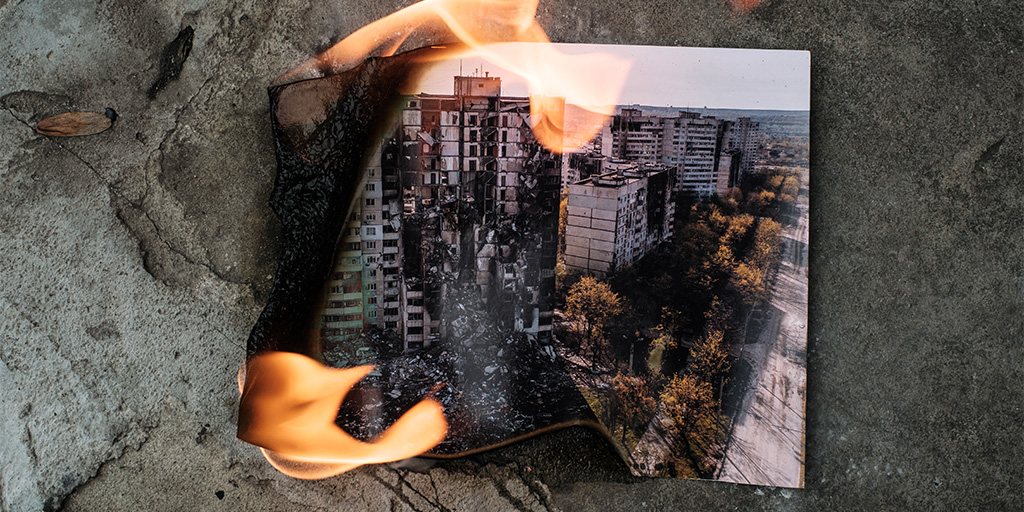 Twitter Envelope
An interview with Saha Dovzhyk, from the Ukraine Lab project.

What is your background?

I was born in Zaporizhzhia, the industrial city in the south-east of Ukraine which has been popping up in the news because of Russia’s occupation of the Zaporizhzhia nuclear power plant in March, and daily bombings of residential areas which have started more recently. This is not the way I would prefer the world to learn about the place I am from, but I can’t say I didn’t see this was coming. Zaporizhzhia – with its industrial complex, transport connections, and the largest nuclear power station in Europe – has been close to the frontline since Russia invaded Ukraine in 2014.

2014 is also the year when I started my PhD in English and Comparative Literature at Birkbeck. I came to London after taking part in the Revolution of Dignity in Kyiv and witnessing the beginning of Russia’s military aggression in Ukraine. At that time and during the next eight years, I felt there was very little understanding of what Ukraine was, what our fight against Russia’s invasion meant, and what implications it had for the world. I designed Ukraine Lab to address this lacuna in understanding.

How did Ukraine Lab come about?

By 2021, I was confident that Ukraine was a blindspot on the western map of the world and that this fact was detrimental to our ability to tackle global issues. To think about the climate crisis or global security meant taking into account the looming possibility of Russia, the world’s third largest oil producer, setting on fire Ukraine, Europe’s largest country. And yet, Ukrainian perspectives were underrepresented in the public sphere. Moreover, those people who could help us reimagine these conversations often struggled with precarity and gatekeeping.

Who are the main people within the organisation?

Initially, the educational programme of the residence was shaped around three thematic seminars on Ukrainian responses to global challenges: war (led by the writer, theatre maker, and director of the Ukrainian Institute London Olesya Khromeychuk), disinformation (led by the author and researcher Peter Pomerantsev), and environmental crises (led by the literary scholar Tamara Hundorova).

The curator of Slavonic and East-European Collections at the British Library, Katie McElvanney, has introduced the participants to some of their Ukrainian treasures.

The creative part of the residence included workshops on writing about Ukraine from abroad (led by the poet Iryna Shuvalova), on empathy (led by the writer and lecturer David Savill), on nonverbal representations of Ukraine Lab themes (led by the psychodynamic therapist Khobir Wiseman-Goldstein), and on creative nonfiction (led by the writer and lecturer, who is no stranger to MIR, Julia Bell). Another indispensable part of the project is the award-winning translator Nina Murray, who has worked on the English versions of Ukrainian texts and vice versa. But the core of the project are the writers themselves: three of them are based in the UK, three are either based in Ukraine or displaced by the war. The residency was held online for security reasons but all the UK-based writers did travel to Ukraine on their own. They are deeply committed to the cause of Ukraine’s fight against Russia’s invasion.

How did the collaboration with Birkbeck come about?

Birkbeck is my alma mater and I’ve been reading the Mechanics Institute Review for years. MIR addresses the audience that the Ukraine Lab also wants to engage: diverse, politically active readers interested in exciting new writing, with no obligatory prerequisite knowledge of Ukraine.

When I realised that the most fitting genre for Ukraine Lab pieces would be creative nonfiction, I immediately thought of Julia Bell. She is one of the most inspiring authors writing and teaching creative nonfiction, who also happens to be the project lead of MIR. From the very start, her response to Ukraine Lab was very enthusiastic. Our message about the existential urgency of learning the lessons of Ukrainian resistance for the rest of the world has resonated with her. Julia not only supported the publication of Ukraine Lab pieces but also taught two incredible workshops on creative nonfiction for the six participants of the residence and for twelve shortlisted applicants who had not entered the final selection.

What goals do you have for the future of Ukraine Lab?

Currently the pieces have been published across six platforms in English and Ukrainian. The next step is to issue them under one cover in the bilingual Ukraine Lab anthology. This will allow the readers to absorb all the texts as well as their visual interpretations created by the brilliant photographer Mstyslav Chernov. Mstyslav has been documenting Russia’s military aggression against Ukraine since 2014 and has been at the very frontline since the full-scale invasion. He reworked some of his award-winning photos in response to the pieces produced by the participants of Ukraine Lab. It has been an honour to work with Mstyslav on this project.

We will present Ukraine Lab at an online event held collaboratively by the Ukrainian Institute London and the British Library on 9 November. We invite everyone to join us!

Sasha Dovzhyk is a special projects’ curator at the Ukrainian Institute London and Associate Lecturer in Ukrainian at the School of Slavonic and East-European Studies, UCL. She has curated Ukraine Lab.