Shyama Perera, writer, blogger, broadcaster, talks to Minna Lacey about the ups and downs of being a writer, agents and the need to have something to say.

Shyama Perera highlights some important questions for new writers to consider. “Why do you tell stories? Who are your stories for?” She sees writing as a process that’s not only about reaching out to others but about knowing who you are. “If you want to be a writer, you have to understand yourself. And you have to have something to say. But it’s also about determination,” she says. “If you want to write, just do it. Do it every single day.” And you feel as if this carpe diem attitude has carried her to where she is today.

Perera’s ground floor flat in Willesden Green, West London, has a warm, relaxed atmosphere. Light streams through the kitchen windows and skylight, brightening the pink and green colour scheme. A bundle of today’s newspapers lies on the table while rousing music plays from the next room – the theme tune from the hit TV series Succession, which segues unexpectedly into Beethoven followed by the Rolling Stones. I sip tea while Shyama drinks a concoction of iced coffee, oatmeal and berries. Perhaps this is the secret to her youthful energy and ability to keep reinventing herself over the years. She wears a baggy green sweatshirt and leans back in her chair, smiling. At 61, she has lost none of her verve, the slash of peacock blue in her black hair a hint of a rebellious past.

Perera has never waited for things to come to her. She’s used to seizing opportunities, making things happen. In 1973, at the age of 15, she contacted her favourite music newspaper, the iconic New Musical Express (NME), and was astonished when they invited her to do work experience in their Southwark office. “I was obsessed with pop music and David Bowie and read all the music papers: NME, Sounds, Melody Maker, Record Mirror…working for NME was a dream come true.” This led to a short stint writing reviews for the newspaper and mingling with journalists and musicians in dingy venues at the heart of London’s rock scene. It was also her first taste of journalism and showed her that she could be part of it.

At 16, Perera left school and the flat where she lived with her mother to fend for herself, moving from job to job to pay the rent. She honed her skills at writing copy fast in the typing pool at London Transport before landing a job as a trainee reporter at Fleet Street News Agency in Exmouth Market. From there, she worked as a court reporter at Bow Street Magistrates Court, engaging with everyone around her, from gaolers and police officers to lawyers and journalists. A string of reporting jobs followed at the Stratford Express, the Daily Star, the Evening Standard and The Guardian. All this by the age of 23.

The apparent ease of her move into journalism, a notoriously competitive world, masks the struggles of her early years. Born in Moscow to Sri Lankan parents, Perera was four when she arrived with her mother in London in 1962, following in the footsteps of her diplomat father. Two weeks later, her father walked out, leaving Perera and her mother penniless. Her mother took a job folding linen at the Grosvenor House Hotel in central London and created a home for Perera and herself in a single room at the top of a Victorian tenement building in Paddington. Perera does a quick sketch of the room she inhabited from the age of four till twelve. “It was a 12’ by 8’ space that contained everything: a double bed, sink, gas fire, Baby Belling cooker, and our fridge was the windowsill. Two floors down were the loo and bath, which we had to share with dozens of other people.”

Despite the lack of funds and cramped surroundings, Perera’s highly-educated mother made a point of keeping up with the news and including Perera in her socialising. “Mum was always reading newspapers and taking me to the local library. Books were always important. And we still did a lot of entertaining, even in that small room. People were always coming round.” Later, her mother took some exams for the Civil Service and secured a job at the Post Office.

Perera’s easy charm and passion for popular culture and current affairs helped her move effortlessly from print journalism into radio and television, including a co-presenting job on The Six O’Clock Show on London Weekend Television (LWT), a popular Friday evening news and chat show in the 1980s. But work wasn’t always forthcoming. After marriage and the birth of her two children, Tushy and Nushy, Perera began to look for new ways to make a living. “We were broke. My husband was writing books and I needed to find a way of working and making money that fitted with looking after children. I wrote to the literary agent Peter Robinson at Curtis Brown with an idea for a popular healthy eating book. It was called The Buxom Butty Eaters’ Bible,” she laughs. “He wrote back saying he didn’t like my book idea but he loved my writing. He said I should write a novel. I told him I didn’t have a story to tell. He told me to write four fresh pages every day, each day a different story, until I found the one that I wanted to continue. At the end of the first week, I sent him four different four-page stories. He replied saying that the first story should be my novel, and the fourth should be my writing style.” Perera took his advice and set to work on a book about a young girl and her three friends and their experiences growing up in West London in the 1960s and 70s, a story based on her own childhood in Paddington.

Finding the right agent and publisher, however, is rarely a smooth experience for emerging novelists. Despite Robinson’s interest, Perera was encouraged to show her work to another publishing contact who passed it on to high-flying literary agent Alexandra Pringle, current editor-in-chief at Bloomsbury. Perera says, “I got a phone call from Alexandra Pringle who bought me lunch in a Greek restaurant on Moscow Road [Bayswater]. She said you need to decide whether you want money or respect. If you continue writing what you’ve started and create a whole life story for these girls, you’ll get the money. If you come to me and expand the six chapters you’ve already written which takes the girls to the age of 21, you’ll earn respect. I chose respect!”

Novelists are often faced with difficult decisions when deciding whether to follow the advice of an agent or editor, especially when eager to clinch a deal. But Perera has no regrets about following Pringle’s advice and adapting the focus of her book. “I respond best when somebody asks me to do something. I’m driven to write, but I work best when somebody gives me a commission, a deadline.” The guidance clearly paid off. A two-book deal with Hodder & Stoughton followed and Perera’s first novel, Haven’t Stopped Dancing Yet, was published in 1999.

By this time, Perera had separated from her husband but, determined to complete her second novel, she continued to write whenever she could while bringing up her two young children. The result was the book Bitter Sweet Symphony, an honest insight into the raw break-up of a marriage. Her third novel, Do the Right Thing, followed in 2002.

Perera reflects upon how she writes and the intense emotion involved in completing a novel. “I’m not a morning person. I write late at night, in bursts. It’s an organic process. When I’m in the middle of writing there’s an excitement, I’m driven, it’s an itchy feeling. It’s impossible to sleep because the characters keep speaking as if they’re living inside me… they [the characters] start off as a series of composites from actual life and my own imagination, but as they develop, they become more independent…”

In 2005, Perera began writing a fourth novel, a version of the Frankenstein story with a female scientist. Now working with a new agent, Perera struggled to complete the manuscript, and after three years of writing and rewriting, the book was rejected by publishers. “It wasn’t working. My agent said she could sell the film rights and make a million. She told me to keep writing, keep writing. At her behest, I changed the novel from a third person to a first-person narrator and did seven rewrites. We couldn’t sell it! It was sci-fi for women. The publishers’ views were that women don’t read sci-fi so it’s not going to work.”

Was it hard to have a novel turned down? “Anyone can have a novel rejected, even very successful authors. But the loss of my fourth novel gave me a scare. Writing was taking up every spare minute of my time. As a single parent with two children, that’s hard. I needed to earn money, and I’d wasted all this time working on a book that wasn’t going to be published.”

But adapting to difficult situations and making the best of things was something Perera had grown used to. She threw her energy into buying and selling property. She took on new freelance work, writing theatre reviews, creating podcasts and blogging, gaining a raft of new followers. Having left school at 16, she gained an Arts degree at the Open University and became a visiting Lecturer in Journalism and Communications at the University of Westminster. She taught essay writing through the Royal Literary Fund Fellowship Scheme and set up a local community literary criticism group.

Which writers does she admire the most today? “I love Maeve Binchy, Mary Wesley, Sally Rooney, Tom Wolfe, Sebastian Faulks and Emily Pine – Notes to Self is a wonderful book. Beloved by Tony Morrison is my favourite novel of all time.” She laments the lack of convincing plot development in many works of contemporary fiction. “Many modern novels have fantastic starts but disappointing endings. They sink halfway through. No one edits enough. They have a beautiful style but no plot.”

Does she ever think of writing another novel? “Maybe. I have four novels on my desktop computer at 30,000 words each. I think 30,000 is my wall! I’m thinking about writing again. I can write, but I want to be sure I’ve got something of value to say.”

You can find out more about Shyama Perera on Twitter @portfoliowoman 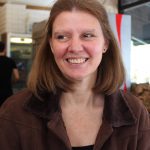 Minna Lacey is an MA Creative Writing student at Birkbeck and is currently working on a novel set in London and Essex. Photograph by Poppy Tollemache