Toby Litt’s latest novel, Patience, twelve years in the making, depicts the world of the ingenious, wise and compassionate Elliott, a severely disabled boy growing up in a Catholic children’s home in the late 1970s. Centring around his brief, intense friendship with the blind-mute Jim, it explores how the powers of observation and the will to connect allow him to transcend the limitations and frustrations of his everyday reality. Elliott’s comma-less stream of thoughts and sensory impressions offer touches of humour too: we meet Flying Mickey and the head-butting Kurt, the ‘smouldering’ but well-intentioned Sister Cecile, and weeping Lise, immersed in her own ‘flower-patterned tragedy’. I spoke to Toby about the process of writing Patience and about his approach to research and writing in general.

Stella: I’m interested in how you went about capturing and maintaining the viewpoint and language of a protagonist unable to speak. Can you talk a little about how you developed the voice of Elliott?

Toby: When you ask it that way – ‘developed the voice’ – I’m a bit stumped. Looking back on the writing of the novel, it feels much more as if Elliott visited me rather than that I made him up. I know that’s exactly the kind of thing I used to hate hearing writers say. It’s like sculptors claiming the statue’s inside the block of marble. However, in lots of ways I think that Elliott outdoes me – in terms of perception and compassion. And how is that possible? Common sense says I wrote him; no-one else did. But he also wrote me writing him.

I remember, when I was doing my creative writing MA at the University of East Anglia, we once had discussion about whether it was possible for a writer to create a character who was more intelligent than them. I believe it’s possible. Because the language helps you. If you get the rhythms right, and the address of the sounds, then the intelligence is there, even if you lack it yourself. I suppose my main ongoing effort was to stop myself – my opinions – polluting Elliott’s voice. He’s a purer soul than me.

Stella: Were there other reasons why Patience took longer to write than your previous novels? Was there a lot more cutting and rewriting and editing involved?

Toby: There weren’t more drafts. But they were much slower drafts, and there were much longer gaps between them. Each of the final three drafts were followed by about a year’s break. I was lucky enough to get a Hawthornden Fellowship – which meant I was able to spend most of a month going through the manuscript word by word with complete focus. You can see me doing a bit of that here: [link: https://tobylitt.wordpress.com/2019/09/22/moving-images-of-writer-of-novel-patience-writing-novel-patience-nothing-more/] I also spent a lot of time saying to myself, ‘No, you can’t write this… It’s too hard… It’s too presumptive.’ Those …’s count for years.

Stella: So it sounds like you found solutions by stepping away and letting ideas incubate. I think a lot of writers recognise the value in that. Aside from these respite periods and plenty of perseverance, can you give any specific examples of where you got stuck (on a scene or the sequencing of events, for instance) and how you overcame those sticking points?

Toby: It was quite the reverse. Because Elliott can’t make the moves of a conventional protagonist, it was more a case of staying stuck. The patience of the title was partly about allowing Elliott’s to dwell on certain periods of his life, and not trying to force him onwards into something conventionally plotty. In the end, I think this added to the suspense of the book – because his victories are so hard fought for and, often, so small.

Stella: So in terms of characterisation, setting and how you sequenced Elliot’s thoughts and recollections, how much was pre-planned and how much unfolded organically in the process of writing.

Well, I typed up the first two pages I ever wrote, and posted them as part of ‘The Secret Lecture’ on my website [link: https://wordpress.com/post/tobylitt.wordpress.com/1694]. If you look at them, you’ll see that quite a lot of the ideas – the few children, the long corridor, Kurt’s wardrobe – were there from the start.

One thing I realised, in the last couple of months, was how much the Summer lectures I’ve given at Birkbeck were part of the writing of Patience. They are me trying to rough out what I think fiction can do; Patience, I hope, is the doing of it.

Stella: You seem to use a lot of authenticating factual detail in your fiction writing.  Do you tend to do most of your research before you draft or would you say the process varies a lot from one project to another?

Toby: It’s heresy to say it, but there are more important things than research. I think getting the rhythm of a paragraph right, getting the rhythm of certainty, is the really important thing. For some writers, that means they need to do the research, find the facts (if there are facts available) and then – after some time has passed – they get the knack of the rhythm. It’s in them. For me, I’m always afraid that if I take different authorities different certainties, I’ll also take their rhythms, and my writing will be choppy, and seem collaged. It’s better to write, ‘We sang the hymns “Squiddledy-diddle” and “Bing bingedy bing”,’ just putting in nonsense words, then, when you do the research, find the hymns whose rhythms fit. Obviously, rhythms can change with rewriting. But if you bodge something together from found facts, over months, it’s very hard making it seem like it comes from one sensibility in one moment.

This is not to put anybody off using research as the basis of their writing. My friend Rachel Seiffert spends months in libraries, getting closer to what I’m calling the rhythm of certainty.

A lot of the rest of the research for the book was about accessing sense memories, where my experience might be useful in understanding Elliott. Again, that’s not what would normally be called research.

Stella: It sounds like writing for you is very much derived from an internal dialogue between your own thoughts, memories and sensations. Can you also tell us a bit about your reading influences, what particular qualities you find inspiring in the work of others?

Toby: For Patience, I was thinking about dozens of writers – Woolf, Rilke, Proust, Keats, Kafka, Blake, Beckett, Austen. More recent writers as well. Claire-Louise Bennett’s POND gave me hope I might do what I was trying to do.

Because of Elliott, Patience is a book that’s infatuated with the sensory world but also aware of religious (Catholic) dimensions. I admire writers who give the world to the reader in more detail, or slower, or more brilliantly than they get it day-to-day.

Stella: And finally, what do you learn from your peers and students in the Birkbeck Creative Writing community?

Toby: From the Birkbeck writing community I’ve learned many more things than I can count. One, I suppose, is that there are dozens of great ideas around. Lots of people have too many ideas. What’s needed to make the most of those ideas is – I’m sure you’ve guessed – patience. Patience to dwell with a single idea for long enough to allow it to come through clearly, dropping away all that it isn’t.

Stella: Thanks, Toby. Wishing you well with writing project ‘Q’.

Patience by Toby Litt was published by Galley Beggar Press in September 2019 and you can buy it here. 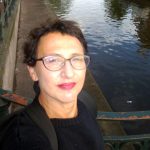 Stella Klein compiles MIR’s monthly events section. Her essays, flash fiction and short stories have been published by Spread the Word, The Mechanics Institute Review, Pyramid Press and 101 Words. Her story “Becoming Helen” based on the life of Helen Keller is available from the end of November at flashbackfiction.com