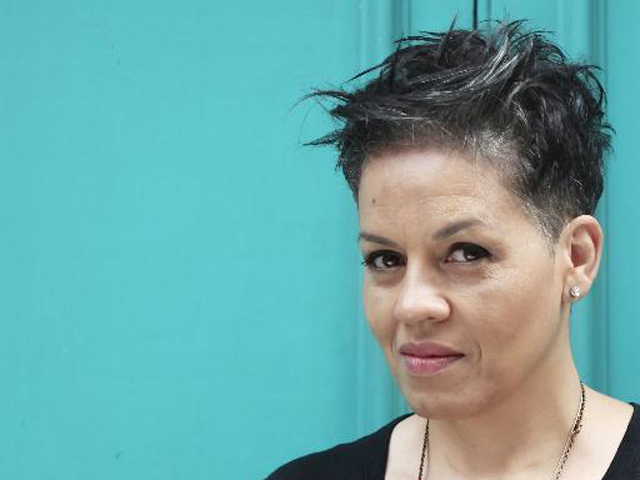 JB: So, I am sitting in my office in Gordon Square and I’m Julia Bell, I’m course director of the MA in Creative Writing here at Birkbeck and I’m sitting with Kit de Waal who has very generously donated the Kit de Waal scholarship to Birkbeck to encourage writers from disadvantaged backgrounds to apply to study for the MA in Creative Writing. Kit is also a very successfully published author in her own right, her first novel “My Name Is Leon” was published in June this year. She was born in Birmingham to an Irish mother and a Caribbean father and has worked for 15 years in criminal and family law. She has also won the Bridport Flash Fiction prize, Leeds Literary Readers Choice Prize, and the Costa Short Story award amongst many others, and her book “My Name Is Leon” which if you haven’t read, you should, is her first book. But I really want to know today Kit, why you decided to set up the Scholarship.

KW: Because I did and MA when I was 51/52 and I’ve never been to university, I left school when I was 15 and I always wanted to know more about literature, to study literature and never got the chance to. So when I went to do an MA when I was 51 I loved it, and I got a lot out of it. I learned the craft of writing, I learnt to find a way to say what I wanted to say and I wanted someone else to have the opportunity. And I know how difficult it is to afford to go to university, especially now, and I thought, what better way to do it than to give someone from my background, a marginalised background, the opportunity to do something that they would never be able to do themselves. And to be able to find their voice and learn about creative writing as I had.

JB: It’s been a fantastic experience, this whole scholarship, setting up this scholarship, and we now have our first Kit de Waal scholar, Stephen Morrison-Burke as well as six other runners up that are also getting help and mentoring and to see these voices emerging in the classroom and through workshops and the mentoring that we’re doing with them. But I wondered what you think “diverse voices” means to you, because I think that off the back of the scholarship there has been quite a lot of attention about this idea that we need diversity in publishing.

KW: Yeah, diversity is one of those words that I’ve begun to loathe, because its bandied around so much. For me, diversity doesn’t mean diversity, it means inclusion, it means that other people get to the table, other people get to have their voices heard. And by other people, I mean all people. Because diversity is not about “the other”, it’s about everyone, and I think once you start saying its the “other voices” you are saying that there is somewhere a cohort of voices that do deserve to be published and then theres “the others”. Or there are people that are celebrated and whose stories should be told, and then there are “others”. And I don’t believe that. I believe that a better word for diversity is inclusion, it includes all of society, it includes the edges of society, and the middle, and the back end, and the forgotten and the under places and the things we don’t talk about and all of those people are included when we say “publishing”, when we say “literature”, when we say “voices” and when we say “stories”. It includes everyone.

JB: Why do you think there is this push at the moment, for inclusivity, for including everybody, that goes under the banner of diversity. What’s going on?

KW: I don’t know, but I have to say I think it’s great that we’re having this resurgence, although at my age I’ve seen these resurgences come and go, I’m hoping that this time that lots of the initiatives that are going on have teeth, and have things at the end of it, have products, and have books that are published that we can see and read, and that it makes a difference. I don’t know why we are seeing more initiatives, I mean Hatchette have got something going on, Orion have got something going on, lots of different initiatives by different publishers to have diverse voices published. And recently The Bookseller did an article saying that one of the big publishing houses was going to look not at diversity in publishing but diversity in the board room. Yes, it makes a difference and I do believe it will make a difference, I think we need both ends though, I’m not saying start at the board room because it may never come out of the board room. It needs to be at the board room, the management and the actual writers getting in and having access to the publishing industry.

JB: My sense is that it’s a structural problem, in terms of how the publishing industry is organised, because it is very class-ridden I think, and very much in favour of a particular kind of privileged voice, and maybe we’ve just got used to hearing that as the voice of society, rather than thinking that actually that only stands for one corner of it.

KW: And what we hear all the time is that publishers publish books for the people that read them, so they publish the books that people buy. My answer to that is that you don’t know who isn’t buying books, and if you don’t see yourself and your story represented over and over again you may not buy books, you may be sick of reading about Downton Abbey, you might want to read something about you and actually there is not something out there about me so I’m not going to buy a book. And I think very much as now we have a lot of conversation going on about trans, and being trans, and all of a sudden people are identifying as trans because we’re okay to be able to talk about it. So, in the same way as when we started talking about gay rights people felt the confidence to come out and say “I’m gay” “I’m trans” “I’m different” and if we start talking about other people’s stories and start publishing other people’s stories, those people will start reading them.

JB: Yes, absolutely. So, in order to kind of contribute to that publishing culture our annual literary magazine, The Mechanics Institute Review, has got some funding from the Arts Council for the next two years to launch as a national literary magazine, so we’re looking for submissions from all across the UK, from writers from diverse backgrounds. We want to get the call for submissions out there, we want as many people as possible to submit work to this magazine and hopefully to turn it into a new kind of literary magazine where you really can hear those diverse voices collected together, so it’s not just a monoculture of a particular kind of writers. So, what would you say to the writer that’s been maybe been doing something on the quiet for a long time, who is perhaps a bit frightened of submitting their work, how would you encourage them?

KW: The first thing, and the thing that is the most important I think, the thing for me is value your voice, value your story. Because you haven’t read anything like what you’re writing, like the thing you’re writing, don’t be afraid to write that thing and send it out. Value your experience, value your voice, value where you come from. So that you can look at your work and say this is good, this is important. I would also say, get any help you can, if you’re in a writers group look at your manuscript, polish it up, submit it, don’t be afraid to submit it, because you’ll get some help in the editorial process to get your work to the stage it should be in but most of all, do it. And take a chance, and get that thing that you’re a little bit embarassed by and have another look at it, work on it and send it off.

JB: Great. I think, just one more question, which is about your own process in terms of your approach to publishing, because it took you a while to get your first book out there, what do you think got in the way for you, what was the process for you, in that sending something out and being brave enough to show it.

KW: For me, I’m a bit ballsy for a start, I’m ambitious, and I just thought “I’m going to do this thing”, so I sent off a lot of stuff to a lot of different competitions, a lot of magazines, I got a lot of no’s, I didn’t let the no’s interfere with what I wanted to do, which was to be published. And also, I was in a writers group, I learnt the craft, I would show my work to people who’s opinion I trusted. And when they said “Mmmm, it’s a bit wordy” or “Mmmm, it’s not very good here” I wasn’t afraid to tear my work apart and put it back together again. Most of all, I took a chance. I just would send my work off. Get a rejection, send it off somewhere else.

JB: Fantastic. Thanks very much for talking to me today Kit.