A couple stop in a tube station entrance, and a man nearby tightens his fingers around a detonator in his hand.

They lean together to kiss, the crowd flowing around them, a moment you can hold like a still from a film, the young woman lifting her face, silver jacket, blond hair in a ponytail, the young man bending, dreadlocks bunched at his neck in a red band.

A moment in a progression of moments, leading towards the moment their lips will meet, running on from all the moments before: the couple rising up out of the underground through the musty-smelling wind, the stale breath of old London with its shades of Bedlam and The Ripper still shifting in the tunnels with the soot-coloured mice that run between the rails, leaning together, the young man behind, the young woman leaning back, new lovers drunk on touch: while above in the glittering day, the young man with the bomb in his rucksack crosses the road towards the tube station entrance, nervous, looking over his shoulder in the way he’s not supposed to, been told not to, a gleam of sweat on his faintly shadowed upper lip. And the moments before that, as the young couple sat in the rattling train, the young woman’s ankles crossed in her green sneakers, the young man’s jutting thighs hard in tight jeans, and above in the street the lad with the rucksack stood ready to alight from a bus and was jostled so he fell against the metal post. And his heart turned over, but nothing happened, and in those seconds, he breathed again, though as he stepped to the pavement he was afraid that the fuse was damaged and panicked that his mission would fail.

And the history before: the night the young couple met, lights strung in the trees in a south London garden, reggae blasting through open windows, his lithe frame silhouetted, hers pale against dark shrubs. A girl you could see as privileged, a man you could assume to be righteously, rightfully angry, and in the first few seconds, as they were introduced, that was just how they saw each other: he on his bristling guard, she potentially afraid and ashamed; and then, as he handed her a drink, each recognised in the other – she in the soft gleam of his eyes, he in the brave lift of her chin – the courage of a survivor.

While across London, over the narrow gardens and the roofs of the terraces, over the low and high rise council estates, the wide ebbing river and the traffic run of Euston, the young man who would carry the rucksack rang the bell to an upstairs flat. Three others bent over a table scattered with batteries and wires, the boom of a nightclub, decadent sound of the non-believers, thudding up through the floor.

And the pasts further back, the stories dovetailing towards this moment:

A tall house on Highgate Hill with a laurel bush in the garden, family dinner with solicitor parents in a shining kitchen extension, the girl’s younger brother and sister squabbling, her mother mildly scolding as she spooned out the pasta, then touching her husband’s shoulder as she turned with the saucepan. Father looking up at her mother and smiling, as if he had eyes for no other, as if the night before, when the others were sleeping, he hadn’t crept into the girl’s room, hadn’t hissed in her face afterwards, It’s just between you and me. Though he didn’t need to say it, how could she tell her mother, how could she tell anyone? A thing that wasn’t supposed to happen. She stared at her father acting as though it hadn’t. Perhaps it hadn’t. Perhaps she had dreamt it; perhaps she was evil, filthy-minded. Perhaps she was mad. No, she wasn’t dreaming; she had to face that when it happened again. But yes, perhaps she was mad, perhaps there was something wrong with her, for it to keep on happening. In school she kept away from the other girls, sat in the library at lunchtime, her limbs heavy and frozen, while they went off down the road to hang around the café and gossip and call to the boys. Envious, no not envious, too removed from them for envy, trapped behind a barrier, her inability to account for herself, even to herself.

But did her mother guess anyway? She would wonder that, years later. And did she blame the girl? For she reserved for the girl a strictness she never applied to her siblings, and a critical tartness of manner that made the girl feel constantly stupid and dashed. Though she didn’t like to admit it to herself, she didn’t want to think she was unloved. Fifteen years old, she sat on her mother’s bed beside her mother as she got ready to go to a function, her mother patting her own hair in the mirror, taking up her bangles and asking, Which one? The girl was flattered to be asked and chose with care, a deep blue and a turquoise to go with the colours in her mother’s kaftan, and her mother, pleased with the choice, drew them onto her wrist. An intimate moment, for which the girl was glad. And in that moment, she had the notion of telling her mother, weighed it in her mind as she’d weighed the bangles in her hands. Her mother leaned forward to adjust her mascara, and the girl watched a little crease appear at the back of her neck and was overwhelmed by a sense of her mother as vulnerable, and of the devastation that such a revelation would create. And that was when her mother, meeting her eyes in the mirror, said tartly, quite nastily, That lipstick doesn’t suit you.

Then the years of anorexia, that wish to be no longer the person you see in the mirror and weighing you down, to flee her; the dropping out of university, the lack of room in your head for facts and complicated thoughts about things it was hard to make matter, the lack of point in it all. And finally, one dark night, the attempt to escape at last with a can of lager and a packet of pills.

And the long road to recovery, which she was still treading that night at the party in the south London garden, but there she was, treading it, or rather, standing still against the dark bushes as the young man with the dreadlocks turned towards her, carrying his own past of oppression.

The monkey noises and gestures, those grammar school boys going past in the morning as he turned out of the Bristol council estate, the sly and not-so-sly slurs in the playground. He stopped going, doubled back to the empty house — his lone mother gone to her hospital cleaning job — or hung around the shopping precinct. His mother summoned to the school, the anger and sadness in her eyes. The taunts didn’t stop, and as he grew his anger grew too: he would flip and lash out, and in the end, he was expelled. The sleek police car drawing up alongside as he walked in the streetlight, a teenager with dreadlocks; once, on a two-mile walk, he was stopped several times. He had learned the necessity of controlling his temper, but he couldn’t help a gesture of exasperation, he threw up his arms, and later his mother would find him in the police station covered in bruises.

And then the long fight for justice, and calmness, and work for a charity helping young people with such problems, and a soft summer night in a south London garden shaking hands with a new worker, the pale young woman.

And as the young man with the dreadlocks stood in court in the dock and the young woman came to in a hospital bed with a drip in her arm, the twelve-year-old boy who would eventually carry the backpack sat neatly in his uniform passing his exams, the pride of his grocer father, destined for university and the life of a doctor. But as he walked home through the winter evenings something was awry. The dark street was a gulf between squat cliffs of housing, acrid light leaking from mean squares of windows, congealed sticky rubbish, a dog slinking, guilty or sly, from a deep black alley, like the gulf between the life of his home – his anxious, conscientious parents, eager to please in this land they came to – and the life of school and the high street where the kids hung at weekends in their hi-tops, careless and entitled. He belonged in neither world. He belonged nowhere; his future, mapped out by his parents, was a mystery to him, alien. He had no real purpose of his own. Until one day after mosque, someone touched his arm and drew him aside.

And here they are now, three young lives converging, and the lives of those milling around them, the young people in jeans, the men and women carrying cases with laptops and papers, parents with a child in a pushchair, which the young man with the backpack has been trained not to see as individual people with lives, only to think of the glory of martyrdom and reward in heaven.

And here is the moment when his thumb touches the plunger, and if the fuse has become disconnected the crowd will keep flowing and the couple will complete their embrace and move on to wherever their relationship will take them, or the pulse will hit the fuse and the air around it will fly out faster than the speed of sound, and in the blast and the shock waves that follow, and the sucking vacuum created, those linear narratives will shatter, the fragments spin – a mother’s resentful face in the mirror, the hatred and fear in a policeman’s eyes, lights glowing in a south London garden, and the moment conceived but never fulfilled, the perfect conclusion, the kiss. 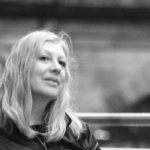 Elizabeth Baines has published short stories widely in journals and anthologies, and two collections, Balancing on the Edge of the World and Used to Be (Salt). Salt also published her novel, Too Many Magpies, and reissued her earlier novel, The Birth Machine, considered a feminist classic. With Ailsa Cox, she co-founded and edited the short story magazine, Metropolitan. She has also been a prizewinning playwright for Radio 4 and fringe theatre.