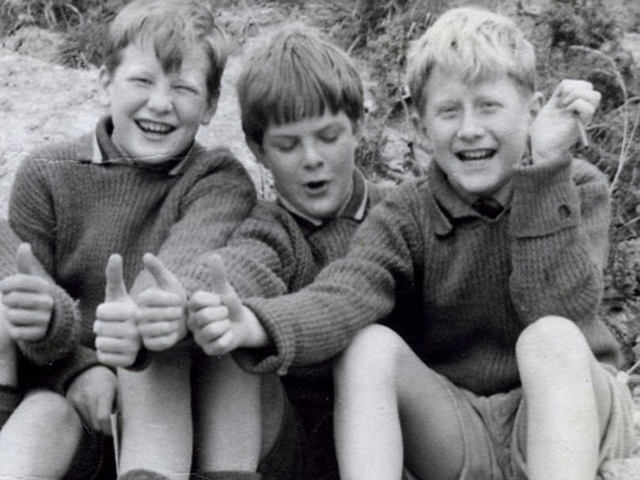 We came up the hill, shoulders wide and heads up; as proud as twelve-year-old boys could be, especially when they’d just won the Rugby World Cup for Wales when they should have been in double French with Mr Wynne Jones. Ioan, Gwilym and me, on our way to the Girls’ School to pull Megan Price’s plaits. It was a tradition, and traditions are important.

“Wadya wanna do when you leave school, then?” I asked.

This was another tradition; every time the three of us walked together one would ask the question. The answers varied according to what was happening in our world and, to date,   had ranged from zookeeper to travelling faggots and peas seller with a van that secretly transformed into a robot. That day it was my turn to ask.

“Astronaut,” said Ioan and we believed him.

Ioan was the one in love with mathematics and physics, the one who went home early just to do his homework without waiting for his Mam to call him. We knew Ioan would go to the stars, no problem.

Everyone except Gwilym knew his brother wasn’t in the Navy; his periodic ab-sences were at Her Majesty’s pleasure rather than in her service. But we never said anything, just nodded him on.

“Tattoos up my arms, crossed anchors on this one and a naked lady on this one,” he held out scrawny white arms to show where he had drawn the desired tattoos with a ballpoint pen. He tried to make the naked lady wiggle by waving his arm about.

“Skinny lady,” I said and we all laughed.

Gwilym grinned at me then.

“My Da sez as you’re a Jew-boy. Sez as how Hitler had the right idea with your lot. He sez you came over y’ere and took our jobs. Married our women an’ all. That’s what he sez anyway. Daft sod he is sometimes, mind.”

Ioan sucked his bottom lip and looked away.

“Girls are coming out, look,” he said, but I couldn’t see. It felt like splinters of ice had entered my eyes and were slicing their way to my heart.

My eyes cleared enough for me to see Megan as she passed. Her dark brown plaits were gone, replaced with a shiny, grown-up bob. She tossed her head at us and walked on, nose in the air. Girls are good at that.

Gwilym kicked a tin can into touch and put his hands into the pockets of his school shorts. Several sizes too big for him as usual; he kept them up with a huge leather belt that had a chrome buckle from his uncle in Canada. The buckle was oval with massive cow’s horns sticking out from it and a picture of a Red Indian in the middle. Gwilym’s uncle came over a couple of years back; he spoke like a cowboy and wore jeans and red plaid shirts. He told us we should call them First Nations not Red Indians. How I wished I had an uncle from Canada. When I asked Mam and Da if I had an uncle they said there was no one left anymore. I would have had an uncle if it hadn’t been for the Nazis, they said. All Da’s family had been killed in Dachau and Mam’s grandpa had died when his plane was shot down over France. We had a picture of him in the glass cupboard in the parlour but Da had no pictures of his family. As a child I found it hard to understand why there were no photos.

Gwilym hitched his shorts up and stared at Megan as she walked slowly towards town. She whispered something to Bethan Lewis and Ellen Williams and they all stared at us and giggled. Girls are good at that too.

“Why’d she do that then? Why’d she change her hair like that?” Gwilym said, his eyes bewildered behind his glasses.

“’Spect she thinks she looks all grown up,” said Ioan. “Changed a lot since she left junior’s.”

Things were changing all around. We were changing too. Ioan was growing fit to bust, almost as tall as his Da but with his Mam’s red hair and freckles. Gwilym was becoming a twin to his older brother, Emyr, even down to the slightly bandy legs my Mam said were due to poor nutrition. And me, in the past hour, I had become a Jew-boy.

We walked to the corner and stopped by my gate to mumble goodbyes. It started to rain and in the distance Megan Price pulled the hood of her coat over her new hair-style. I didn’t go in immediately but watched as Ioan ran over the road and in through the side door of his Da’s yard. The sign above the gate read, ‘James Pritchard – Monumental Mason. He was bloody monumental too, six foot six if he was an inch and reckoned to be a fine looking man with a tidy wife who ruled the roost with a scrubbing brush and a duster. Everyone approved of Mrs Pritchard and they knew better than to call on her on a Monday when she was washing or a Tuesday when she ironed. The rest of the week was OK as long as it was after ten o’clock, by which time she would have cleaned the house from top to bottom, changed into what she called her ‘receiving’ clothes and have put the kettle on the hob over the shining black-leaded grate. Or so my Mam said many a time.

Gwilym ran up Heol Manod and turned down Inkerman Street where he lived in a two up two down with his Mam, Da, six brothers, one sister and his old Grampy. Where they all slept no one knew and no one dare ask, Mrs Morgan had a hell of a temper; took on three policemen once when she’d had a few. Two of them in the rug-by team; still she was the only one who walked away unhurt. No one ever called on the Morgans, even Mr Morgan’s sister who lived over in Corris Uchaf only ever called to bring hand-me-downs for the kids. She never stayed longer than ten minutes. I’d been in the house once, it was a shambles, chairs and beds all over the place, clothes hanging off nails hammered into the walls. I didn’t like it much, it smelled funny, but I never said anything because Gwilym didn’t seem to notice.

The rain was coming harder so I ran up the path and went in the back door; there was Mam, cooking as usual.

“Hello, love. Had a good day at school? You’re looking pale, nothing wrong is there?”

But by now those ice splinters had reached my heart.

“Raining is it? Wet through you are, I don’t know, you boys!” she tutted took my jacket off me and hung it by the stove to dry, then she handed me a cup.

“Here you are, love. Take this cup of tea and go and sit by the fire with your Da. Dinner won’t be long.”

I carried the cup in and sat on the sofa with my Da and stared into the fire like him. He could sit for hours like that, not saying anything just staring and sometimes he would sigh. I could see all sorts of things in the fire but always writhing things, things trying to climb out and sometimes I would get nightmares. I was in the fire and banging at a door to get out but no one could hear me.

Well, things change, don’t they? Ioan never made it to the stars in person, but he became an astrophysicist. At regular intervals his mother kept everyone up to date at the post office.

“First class honours, well, well,” she’d say. “Where he gets it from I’ve no idea. Twp at school I always was and his father! Well, well.”

“Masters now … and he’s going to do his Doctor of Philosophy. Imagine!”

The last letter I had from him had the return address to Professor Ioan Pritchard at one of the Cambridge colleges. I never replied.

Gwilym moved to Wrexham and got a job driving lorries, he married Megan Price. The great talk of the village was that she was pregnant going up the aisle.

“Look at that … her all in white too… no shame these days … what ever next?”

When I became a doctor, it was as much of a surprise to me as to everyone else. An even bigger surprise was when I left home and came here, to the land of my fathers. Da had died before I left home, but Mam was still alive. I remember her face when I came home after a shift at the local hospital and told her I was coming over here.

No answer I gave could satisfy her, or me really.

So here I sit with a twelve-year-old boy in my arms. A twelve-year-old boy I have shot through the chest and who is dying. I am a doctor and, not only can I not save him, I was the one to kill him. He’s warm but shivers with shock and fear. The bullets and rocks are still flying around us and I can hear Solly, my company commander, shouting at me to get back, but I stay. No more of a target here than anywhere else in this God-forsaken place.

“What d’you want to be when you grow up?” I ask the boy who never will grow up.

That’s something we never thought of, Ioan, Gwilym and me.