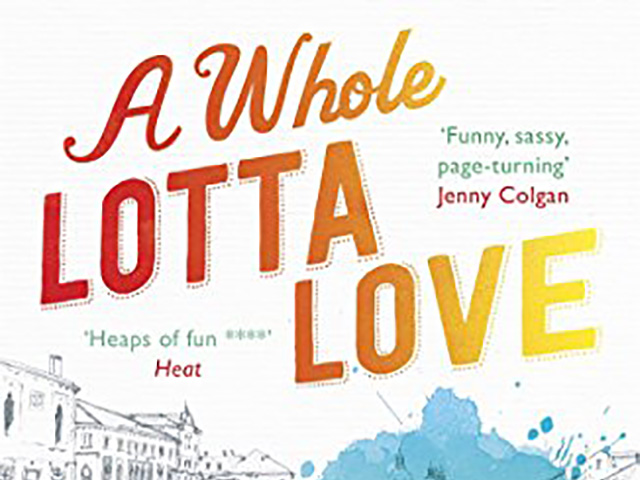 Louise Lee seems like a character out of an episode of Grace and Frankie— a smart girl, sassy and with such sense of humour you could listen to her juicy tales for hours.

I meet the writer in the Giraffe cafe in the leafy borough of Blackheath, south-east London, for what is meant to be a ‘meet the author for a cuppa’ but swiftly turns into some Sauvignon Blanc-fueled gossipy kind of interview. Don’t ask me why but I feel like I’ve known Louise my whole life. Maybe it’s her contagious smile, maybe her down-to-earth manners. She’s no nonsense and she knows it. She makes you feel at ease like an older sister who will never judge your actions because she’s been there, done that. You can clearly picture where bad-ass Private Investigator Florence Love comes from, the protagonist —and why not? Alter ego—of Louise Lee’s trilogy. We’re here to chat about the Led Zeppelin-esque titled third instalment of Florence Love’s saga, A Whole Lotta Love, which follows A Girl Called Love and In The Name of Love (I am starting to believe Louise and I might also fancy the same kind of music).

What makes Florence’s adventures so compelling is the fact that this P.I. is not only on a hunt for unfaithful men, but also in search of her own mother who vanished when Florence was just a toddler and who is the reason why she became a private detective. “A Whole Lotta Love doesn’t just put the trilogy to a close but also Florence’s love story is finally tied up,”  Louise says. I can’t resist asking if Florence is finally going to achieve, well, her own happy ending after some rather hilarious experience with the other sex. “In this third book, I realised how Florence’s journey is less about finding a bloke,” Louise laughs, “but more about finding a friend, especially a woman she can trust after her mother ran away and all the lies surrounding her disappearance. Yes, it’s definitely more about friendship than love.”

And if you think Florence Love’s life is indeed very colourful, Louise’s own life could give her fictional character a good run for her money. After having obtained a degree in Geography, Louise started her career into teaching… albeit quite randomly. “I still don’t know how I started this job,” she confesses wholeheartedly. “In fact I didn’t have a bloody clue! I turned up in the morning in a class of 32 students and… Here I am, trying to plan 9 lessons in a day.”

Louise taught in grammar schools in Blackheath and Greenwich, then she moved to one of the first schools in Qatar that allowed female teachers. “It was really mad,” she confesses, “we’ve even received death threats”.

Then the big career change in private investigation not without drama that such job may pose. Louise tells me the story of this Canadian woman who contacted her two weeks before she was due to marry her British fiancée. “Her fiancée accidentally sent my client a text clearly meant to somebody else. She started panicking so I did a background check and discovered that her fiancée was coaching football at two different schools in two different counties.” Turned out that he was the father of a kid in each football team. “This guy wasn’t just actively married to two wives but he also had a third wife he never divorced in the first place!” This trigamist – if such word even exists- vehemently denied any wrongdoing, accusing Louise of fabricating this whole story up in spite of her gathering all the evidence and certificates. “Crazy how I almost ended up doubting myself, like…have I got this really wrong?!”

Surely such episodes must have provided Louise with more than a wee bit of inspiration for the character of Florence Love. “During the time of my MA in Creative Writing at Birkbeck, it was my tutor Julia Bell who basically told me not to be afraid of writing about what I knew best. She was like,  you’re a private investigator with so many amazing stories, why not borrowing from your own experience?” Luckily, Louise followed her tutor’s advice, penning funny and sometimes larger-than-life characters but with a punchy and crisp prose. “I know some writers like to employ a language full of colourful metaphors but the way I like to write is to totally pare back”.

Louise still cherishes her time at Birkbeck, though she felt very intimidated at first, starting a Master degree without any previous writing background. “After about 3 weeks I found my place, my home. This might sound really ridiculous but it’s like being in the Big Brother house, you have to form relationships if you want to survive!”

However, does the hectic life of a Geography teacher – turned P.I. – turned writer who, let’s not forget, is also mother to a little girl and a grown up boy, sometimes takes its toll? Louise doesn’t deny it, but her antidote? Of course, doing something crazy.

“A few months back I was feeling very spiritually depleted. Then I found on the Internet about this Spring Awakening Retreat in Sri Lanka. Ten Days. Vegan food. No sugar. No salt. No phone. I hardly brought anything with me.”

“I’ m sorry,” Louise apologises. “Are you into some kind of spirituality?” I say that although I wouldn’t consider myself religious, my kind of spirituality is hippish, Peace and Love, We’re all brothers and sisters. What I struggle to believe is how Louise, so full of live and who repeatedly apologises for chain-smoking throughout the interview, could somehow survive in such ‘extreme’ conditions. “First, they work out which dosha you are, then they carefully tailor a specific treatment for you. You go onto this spiritual journey which is just so…” The whole experience has clearly given Louise a new perspective in life, though she admits that booking a last minute trip without her kids and partner did sound a bit bonkers. “But it was so worth it. You’ve got these women all coming here with their own problems, their own stories. For example this woman, she didn’t tell me until the last day that she was a paranoid schizophrenic who could hear voices. Can you imagine? All these incredible characters in in this really isolated place. It was magical”.

Any hope that Florence Love could maybe jet off to Sri Lanka? “You bet! During this retreat I had a clear vision for my fourth book!’.

As our two small glasses of Sauvignon Blanc go down rather nicely on this sunny Monday afternoon, our conversation veers to blokes, boyfriends, and cheaters including a former fling of mine who, like in one of Louise Lee’s books, lived a double life and was indeed married with children. (If only I had known Louise a few years ago). I also find out that we both share a passion for travelling – read Florence Love’s adventures and let me know if you don’t want to book a trip to  le colline toscane or the beautiful lakes and caves in Slovenia— as well as some stressful holidays experience in one particular exotic destination where we both faced a certain level of harassment from the locals.

Would Louise ever consider going back to her former P.I. life at all?

“Truth is, I’m out of practice. I’ve been writing full-time for the past 4-5 years and I’ve kind of lost touch with the job. It’s all about knowing the right people and most crucially, keep in contact with them.” She also admits that technology has changed, and nowadays private investigation is very corporate. “I do miss the morbid curiosity of it, on the other hand I don’t miss the dark side of this job, when you have to deliver bad news to wives who have been cheated, bringing them some nasty video footage. Everyone has the right to live a true life, free of lies.”

I love her.  I absolutely do. But time is ticking and the interview must terminate here if Louise wants to avoid a parking ticket.

We pay our bill and as we kiss goodbye, I think of Florence Love. Of Louise Lee. Of both. Then I’m thinking how the hell I’m supposed to convey her energy in over a thousands words? Unlike Florence Love, mine will be mission impossible.

Still, I cannot wait to read if Florence Love is going to paint Sri Lanka in red…

Silvia Rucchin is a very proud immigrant addicted to, in alphabetical order, animal-related tattoos, books, craft cider & beer, dogs and Glastonbury Festival. She is in her last year of a BA in Creative Writing at Birkbeck University.