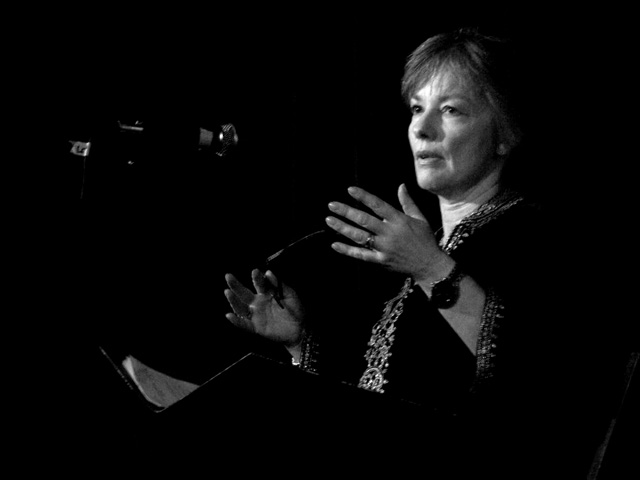 MIRLive: An Evening of Festive Fun

Every time I go to a MIRLive event I think it’s excellent, and then I go to the next one and it’s better. As Melanie Jones introduced the readers, herself channelling Christmas Candy dressed in a red and white stripy top, red skirt and Santa hat, she commented that the quality and number of submissions had been staggering. As one of the selectors I can confirm that we juggled many stories to find the right combination and turned down many good ones simply because we didn’t have enough time to stage all the potential readers. This should be taken as encouragement for everyone wanting to submit – if you weren’t chosen this time, you may well be next time.

The theme of the night was magic, and magic we got, mixed with plenty of festive fun. Lyndsey Seaborn began the evening, flying the flag for the Creative Writing BA students. Her story, A Christmas Wish, was one of magical mystery flecked with sadness and knowing. The story, beautifully read by Lyndsey, wrapped us in winter and set the tone for the evening.

As Lyndsey left the stage, there was a rush of energy at the back of the room, as Martin Wakefield swept in, wine glass in hand, and in the nick of time to take the stage. Anyone who has heard Martin read will know that his stories are captivating, experimental and often wicked and his reading is formidable. He didn’t disappoint as he read Martinko, a tale of towers and opulence. “There were huge ornate golden doors to a lift which I took to the twenty-first floor and there I found again a door.” he read!

Ellen Hardy read Kai. It cleverly began as a story mixing modern day life with old folklore and lulled us into the false sense of security of a sweet tale. But the simple phrase “I wanted to feel something” warned us that the story would turn, and turn it did as we were transported into the cruel world of a young man’s failed suicide. Ellen’s considered and calm reading led us through this powerful story.

Joseph’s story, The Pooka of St Giles, ended the first half of the evening in style. Joseph’s biography said that he left Ireland and set sail for Ithaka and faced Lystrygoninas, Cyclops and angry Poseidon. As Mel introduced him, Joseph admitted that he had been drunk when he’d written his bio. Drunk he may have been, but the connection between ancient Greece and his moral tale was not lost on the audience. His modern day property entrepreneur (‘the only spirit I believe in is the spirit of making money’) took on an old man in a church yard and learned a lesson.

Peter Coles and his The Great Caterpillar Migration kicked off the second half and immediately had us smiling. The story, inspired by David Attenborough’s Planet Earth 2, tells of a natural phenomenon that happens once every three years, a huge migration of caterpillars. We laughed at the banter between the old married couple fortifying their cottage against the impending migration; the 105 year old wife barricading the door as her husband writes lists. While this was a magical, fun story, Peter’s wonderful imagery made it seem very real, almost as if David Attenborough was indeed the husband hiding under the up turned bath, lists in hand.

Our penultimate reader was James Mitchell. The Great explored what it may be like if God was one of us (a line James considered deleting!). The protagonist, Kevin, comes across God on his way to sign on at the job centre. The audience laughed out loud as God explained that Trump was a consequence of a very long to do list and some unfortunate prioritising. As I listened to James’ clever and sharp humour I was put in mind of many a Neil Gaiman story.

Neil Gaiman became a theme of the evening as Gilli Fryzer took the stage as the evening’s headliner. Gilli’s story, The Basket Weaver’s Tale, had been a prize winner in the Word Factory/Neil Gaiman modern fable competition but this was the first time that Gilli had read it in public. As fables are an oral tradition, Gilli sat, specs on nose, book in hand, in the style of a true storyteller. She explained that there are rules to telling a fable and once she realised this her own fable had written itself. And so, listening to the Neil Gaiman set line, ‘Long ago, in the days when there were still fish in the oceans and cars on the roads, there lived a woman in a certain land who was not afraid of governments’, we huddled in to hear the tale of a woman’s journey to discover the thing that she coverted most. Gilli had us entranced as we nodded along to the familiar pattern of the fable, feeling secure that at the end of the tale we too would be, like the woman, a little bit wiser and a lot entertained.

If the aim of December’s MIRLive was to have festive fun then it had excelled but it had done more than that; it had showcased some amazing new talent and I’m sure that come the next one on January 30th, I’ll be saying the same again.