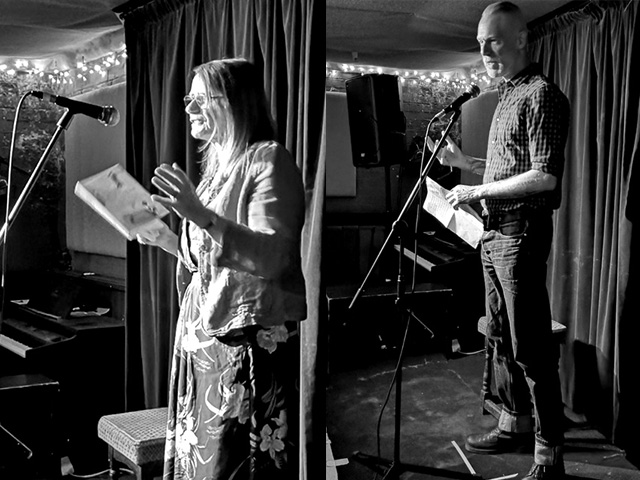 Our Arts week, MIRLive special was held on the 14th May at the Harrison. We were lucky enough to have readings from Jonathan Kemp and Ailsa Cox, our two headliners for the occasion.

Caroline McCaulay was first up to the mic with “The start of Gracie.” This story was written from the perspective of a pregnant teenage girl. Both brash and naive, as she goes through the brutal trauma of birth, she becomes disillusioned with pre-conceived ideas of love. Caroline’s energetic, vivacious delivery created a strong sense of character.

This fast paced piece contrasted with Stephen Jackson’s soft, slow delivery of his beautiful poem, “A man who is Good with his hands.” Stephen’s poem was rich in metaphor and sensitively presented, ending all too soon.

Tabitha Potts took to the stage to read another piece about teenagers. Her story “The Edge” was deceptively simple in style, but we were to discover that the edge in the story was both literal and metaphorical. The underlying tension between the adolescent friends was convincing and conveyed successfully.

The first half of the evening was concluded by Jonathan Kemp. We were treated to an extract from his latest work-in –progress called “Neither, Nor”( in a nod to Kierkegaard’s “Either/Or”) The story revolves around a queer academic’s discovery of a Polish philosopher’s manuscript, supposedly written in the twenties and thirties in Berlin before the rise of Fascism, but which had disappeared in 1941. The extract Jonathan read was the beginning of the philosopher’s memoir. As a Polish Jew born at the “wrong time” the manuscript has a despairing tone. It is a confessional piece, its author bent on suicide. Yet, as Jonathan read of “atavistic screams” from birth, and a face, so ugly it is described as “a blemish between two ears,” the story of a child, trapped by her designated gender, promises to be tragi-comic. The extract also suggested that the novel is patch worked with satisfying literary allusions, although the intriguing Jaromir Hladik philosophy is entirely imaginary. Jonathan’s entertaining reading led us nicely into the break, giving us lots to discuss at the bar!

Back in our seats, refreshments in our hands, we were eager for the second half to begin with Sean Preston’s tale of unlikely love found and then lost, between Pig and Turtle. This comic story was called “Reptilian Repose.” Evoking gentle irony and written with a lightness of touch, this was an enjoyable, well delivered piece.

Sharon Eckman’s expert reading took on a darker tone. “The scent of Macaroons” was rich with descriptive detail and created a vivid picture of a young woman’s singing lessons with a predatory teacher. The teacher’s insidious exploitation of the girl was made more shocking by his casual, dismissive comment about macaroons at the end of the piece.

This was followed by Valentine Carter’s surreal story, “A thing of Beauty,” about a visit to an Art Gallery. As Alex stands before a Rothko mural, “Black on Maroon 1958,” the painting seems to talk to her, and wills her to destroy a pretentious male philistine who thinks he can impress her with his wealth. As the paintings slide off the walls the story takes on the intensity of a bad acid trip. It was hugely entertaining.

To top it all, Ailsa Cox ended the evening with two evocative readings from stories set in Manchester. The first was from her collection of short stories, “The Real Louise” and was an extract from the story, “Making it Happen.” The narrator is at her brother David’s thirtieth birthday party, and there are hints that while her own incipient love affair must be kept a secret, David’s marriage is about to unravel. The story moves deftly through recollection and changes in time and place that give increasing depth to the story and was both moving and funny to listen to. Ailsa’s extract from a work-in-progress, called “Blackbird” was also concerned with the nuances of family relationships, this time set at a funeral, where Rosie, the daughter is missing, “dominating the funeral by her absence.” Both stories led us expertly into an awareness of the gaps in communication that can fracture family relationships. We were left wishing we could hear more.

Our next MIRLive event will be held on July 9th in the Harrison. Look out for the deadline for submission and do join us there, either on stage as a performer, or in the audience for a really great night out.