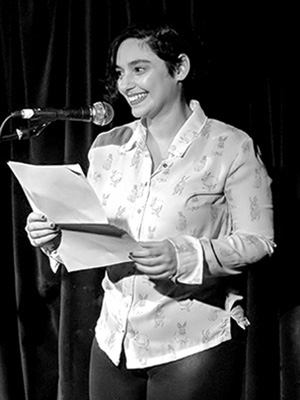 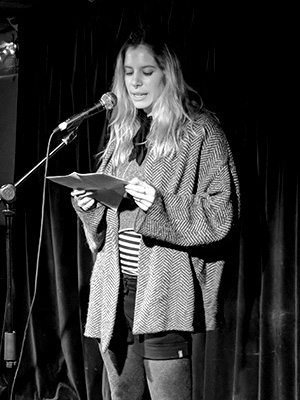 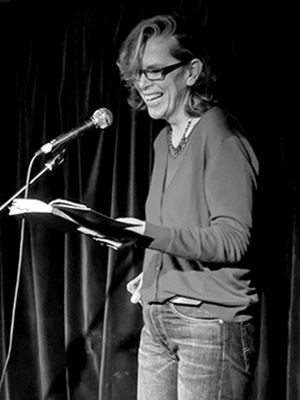 Our first MIRLive of 2018 was held on Monday 5th February in the packed basement bar at The Harrison. The whole evening fizzed with captivating, dramatic readings. We were eager to hear our headliner, Lara Pawson. Her interest in, and attentiveness to others’ readings created a warm, encouraging atmosphere that was enjoyable for all.

The first story was read expertly, by Valentine Carter. “Lone Star Movie” was an original, complex piece in form and content. The story focused on a transitional moment in Valentine’s childhood. Her fantasy world as a cowgirl was evoked with rich, fresh and often humorous descriptions. It gave her the strength to deal with her mother’s problems, unlike her father who lacked imagination, and couldn’t cope or protect her from the taunts of her peers. Interspersed with the narrative were carefully chosen snippets of factual details and philosophy. Quotations from Hawkins, and the ideas of Aristotle were touched on. These reminded us that memory is always unreliable, bringing into question what is truth in autobiographical writing.

Liz Uter’s story, “Brown Girl in the Ring” was also written from a child’s perspective, detailing a moment of mishap and mayhem. Liz’s dynamic reading built to a crescendo as the little girl got tipsy from surreptitiously sampling the grown ups’ drinks at a family celebration. The pace of the story increased as the dizziness set in. We were lulled into a false sense of security, enjoying the antics of this precocious little girl, so that the final image of her with glass embedded in her forehead was arresting and shocking.

Next up to the stage was Usha Rowan, whose story “One Day In My Life,” was an extract from her novel-in-progress. Usha gave a polished performance in which the narrative was measured and the dialogue dramatically effectively. This was a story detailing a pivotal moment in her life and the lives of a whole nation. Set in Uganda in 1972, it presented a moment when Idi Amin made it clear that he wanted to rid the country of its Asians through a televised speech. The impact of this was made more poignant in that it was relayed to the ten year old child via her much older sibling, Bhai. The irony of Bhai’s own prejudiced remarks against the indigenous blacks made this a complex, interesting piece which was richly described and left us wanting more.

Before we refreshed our drinks at the interval, we were treated to a lively, comic piece by Kayleigh Cassidy, called “A good Catholic Girl.” Kayleigh’s warm relationship with her ebullient Irish mother was evident, even as she satirised her tactlessness. Comedy was derived from the differences in accent between mother and daughter, as much as moral and ethical views. Kayleigh’s delivery had us all giggling; her connection with the audience made this an effective performance piece which was thoroughly enjoyable.

We were eager to settle back in our seats to hear Sogol Sur begin the second half with her story “Transit”. This explored the trials of being stuck in an airport on her way to visit her family in Iran. In Sogol’s inimitable way she captivated her audience with her skilful, dead pan delivery of her honest observations. Through the humour of her thoughts and her awareness of cultural divisions and prejudices, she endeared the audience to her. It was another entertaining, yet thought-provoking piece from an excellent writer.

Laurane Marchive was next to take the microphone. Her story, “Morning” was based around a dialogue between two flat mates as one fries eggs for breakfast in the other’s pan. Laurane’s skill lay in her ability to take this moment and economically evoke multiple layers of tension. We gained a real understanding of character and situation through carefully selected words and phrases which allowed us to infer far more than was said. The narrative was fragmentary, inviting the audience into the female character’s thoughts very effectively. The precarious condition of the pan at the conclusion was a wry metaphor, foreshadowing further hostility. If this was autobiographical, I can only hope that, by now, one of them has moved out.

The climax of the evening arrived with Lara Pawson’s wonderful readings from her autobiographical book, “This is the Place to be.” The book circles her cultural experiences growing up in England and her experiences living in Angola amidst the tumult of civil war. At times, this book also questions the reliability of memory. Lara’s readings were taken at random from several different parts of her book, in keeping with the fragmentary, non-linear form of it. The contrasts took us through a deliberately jarring range of emotions. These moved from laughter to more serious, thought-provoking moments which made us consider attitudes to gender, race, identity, and the complexity of friendships. Although the extracts were highly personal, they were relevant to us all.

It was a privilege to hear Lara. Her readings ended a fabulous evening of really excellent performances from all our readers. It was a great start to 2018 and I look forward to our next MIRLive event with much excitement.