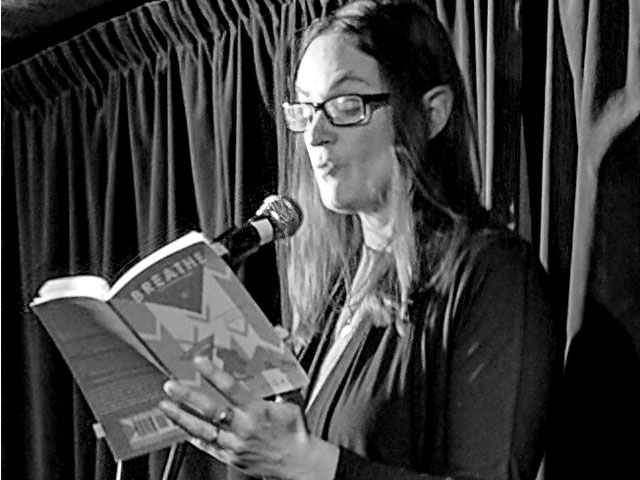 On a frozen Monday in January you might be tempted to stay in and crank up the heating. But all who braved the weather to fill the velvet curtained basement of the Harrison were treated to a cosy room full of readers, writers, and lovers of literature with a selection of stories to tell that were both funny and original and touching at times.

First under the glow of the spotlights was Sharon Eckman, with her story “God’s Brother”. This expressively told tale observed religious events from the point of view of a disdainful brother of God, disgusted at God’s lack of compassion.  A funny and satirical fable with feminist overtones, Sharon also mentioned that she is looking to develop the story idea into a novel.

Laura Miller, a student on the Birkbeck Creative Writing MA and veteran of MIR 13 swiftly followed, reading a selection of three poems. “Carried Away” was a haunting poem inspired by the story of a woman in France who’d abandoned her baby on a beach.  This was followed by “Jen lives in South Ken” deftly describing the character of a landlady, and “Beloved Disciple” about a father.

Next, with her story extract “The One With The Blue Mailbox” Roxanne Forbes gradually built up a sinister atmosphere pervading the home of her characters. Partly futuristic, with a conspiratorial overtone, this was a story for those that dread the regular morning battle with the toaster and the kettle. She left immersed in the story, with the tension building to a boiling point, and technology about to take over.

To round off the first section of the evening, MC Melanie Jones introduced Alison Hitchcock and Brian Greenley, to talk about their fantastic letter writing project “From Me To You”.  Alison and Brian told the story of their growing friendship, which developed out of over 100 letters that Alison, sent to Brian over the period of his treatment for cancer.  Frank and funny, this trail of letter writing traced the development of their deepening friendship, from the initial ‘Oh no what am I going to write’ moment to the jubilation of Brian’s all clear, and then the cancer’s return. The pair read extracts from the letters, often jokey and upbeat, interspersed with Brian’s own often more sombre thoughts from his diary. It was an inspiring and original idea. As was Melanie’s January Quiz, the questions to which were also cleverly themed around the art of letter writing.

With the audience thoroughly refreshed after the break, Jo Holloway treated us to a quirky dystopian vision of the future. In “The Last Days” an elderly couple carry on trying to live life in as close to normal circumstances as they can manage, as the world around them crumbles into chaos. With engaging and vivid imagery, Jo’s story calmly depicted a world slipping away.

The penultimate reader to bound up onto the stage was Stella Klein, whose story “Flesh and Bones” brought us inside a father and daughter relationship that was dotted with the little conversational barbs that layered one upon the other can begin to drive someone crazy. A clever and funny tale of family relationships, boyfriends, and growing up.

Tonight’s guest writer Leila Segal talked about her time living in Cuba between 2000 and 2006, and read four captivating extracts from “Breathe”, her debut collection of short stories based on her time there. Leila is interested in the relationships that she saw in Havana between foreigners and Cubans, and the dynamic within romantic attachments. The stories focused on Cuba as viewed through the eyes of her characters, Western visitors to the country. In “I Never See Them Cry” a girlfriend is to meet family for the first time and in “Luca’s trip to Havana” the central character Luca lusts after a hotel employee. In her last extract, “The Party”, Leila captured the atmosphere of Cuba particularly well. The stories were poetic and evocative and the affection which she has for the country came across strongly in her reading.

To close the evening, Melanie announced the winners of the earlier quiz with the winner coming up with very creative meanings for the postal letter writing acronyms for EGYPT and CHINA. Don’t know the answer? Google it and have a giggle.  Once again MIRLive was an excellent evening of literary fun, showcasing some outstanding writing and sparked up some interesting conversations that continued into the following week. The next event on March 6th to celebrate International Women’s Day promises to be just as exciting.