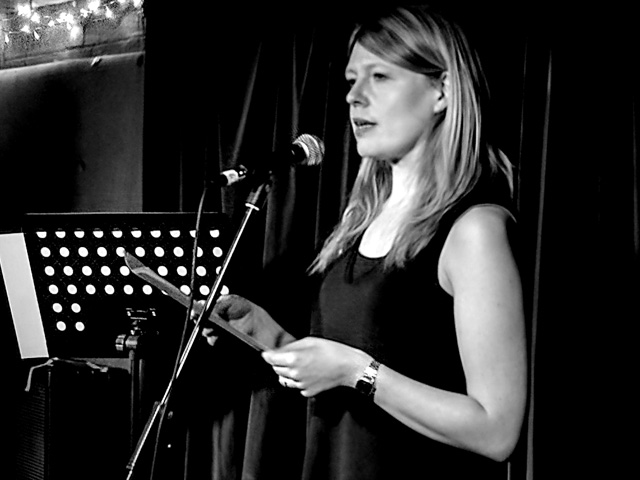 MIRLive’s latest evening of readings was held at the Harrison on Monday 26th June. This time the focus was on work derived from the writers’ own experiences. The readings took the audience through a range of emotions in a variety of compelling pieces.

Firstly, Louise Kramskoy read a story called “Glassblowing” in which the narrator depicts her parents, meeting at college and falling in love. The intricacies of her mother’s skill at glass blowing was beautifully evoked through Louise’s imagery, and the child and her father’s reactions to the craft, powerfully demonstrated the intense love and awe they felt. The story is ultimately an effective depiction of grief and loss and the child’s sudden awareness of her mother’s vulnerability created an extremely moving ending.

This reading was followed by an extract from Christina Baum’s book “English and Me” which was a detailed, humorous account of her experiences as a young woman, leaving Brazil and living in digs in London. Christina’s account of the difficulty of understanding London accents and phrasal verbs was very funny. She certainly had the audience chuckling at the landlady, Mrs Davies, offering hapless Christina baked beans and Dallas, as the highlights of life in Britain in the eighties. The extract ended on a tragi-comic note that left the audience wanting more.

Next to take the stage came Aliyah Kim Keshani who read a piece about the day of her uncle’s funeral in Malaysia. Alyiah evoked the sense of people and place through carefully chosen descriptive detail and the story communicated the sad, strange, yet wonderful mixture of emotions she felt on such a significant day. The poetic nature of the piece as she moved to the end was very poignant.

I would have liked to have taken longer to process it, but I had little time, because I was lucky enough to be next up to the mic with a piece called “Our Father.” This was an extract from a longer piece about growing up in Wales in the seventies and eighties, and I was relieved to hear laughter in the “right” places!

After a rush for the bar, the Welsh theme was continued when Miranda Glass took to the stage. Miranda’s story was extremely funny, depicting her experience of dating an eccentric chap, who thought dressing up as a Welsh dragon was the way to her heart. Despite the great comedy value, Miranda’s story-telling skill meant the ending was rather touching and very effective.

Next came our first headliner! Emma Henderson read a piece that she had started while at Birkbeck. It was called “Treatment” and dealt with power imbalance, infatuation and abuse. The description of the child taken advantage of by her piano teacher was disturbing but skilfully worded, and while the themes were challenging they were deftly handled. I, for one, hope she will write the second part which she promised would be called “The Cure.”

The evening came to a close with our second headliner, Katherine Angel. Katherine read an extract from her new book in which she used her expertise and extensive research to analyse how we construct our own realities. Katherine’s academic understanding of psychoanalytic concepts allowed her to bridge the gap between theory and emotion, and her own motivation to create and self- define. It was an extremely thought- provoking piece and a great end to a thoroughly enjoyable evening!