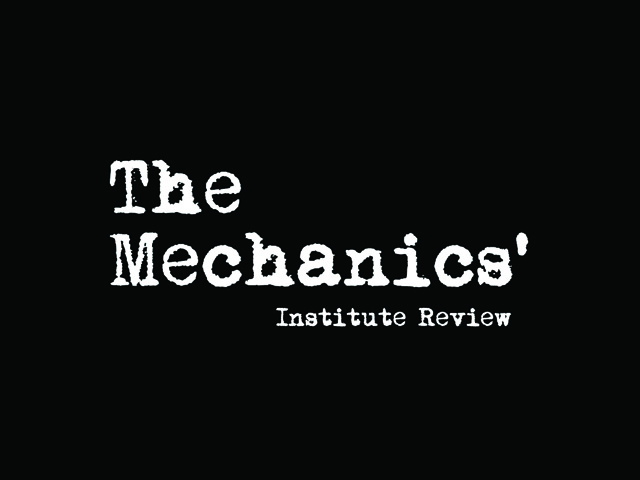 If there’s something weird
And it don’t look good
Where you gonna go? MIRLive!*

On the day the sky turned red (or brown, orange or yellowy grey, depending on where you were), it was a relief to take sanctuary in the basement of the Harrison for a MIRLive special celebrating the publication of the latest issue of The Mechanics’ Institute Review. All the readers were authors featured in MIR14, reading extracts from their MIR14 stories. Our MC was Rebecca Rouillard, one of the MIR14 editorial team, who, after acknowledging the apocalyptic conditions outside, reminded us that this is the first issue of The Mechanics’ to have invited submissions from across the UK, not just from the Birkbeck community, thanks to a grant from Arts Council England.

Elinor Johns opened the programme with an extract from “Kissing”, a story of self-discovery set in 1960s Carmarthenshire. Channelling her inner Catherine Zeta-Jones and invoking D. H. Lawrence, Elinor took us in an Austin 35 to an eye-stingingly windswept beach where May’s would-be seducer’s groping, slavering, bread-clagged advances serve only to remind her of a previous kiss, intoxicating, giddy-making, breathless, from her brother’s dashing girlfriend.

Jo Holloway was up next, reading from “The Katie Merrick Case”, about a near future in which the general public’s online vote constitutes one seat on a jury of twelve; social media has become life-alteringly important and influencing it is part of the legal profession. We heard how Liz tricks her way past a posse of fellow lawyers, journalists and spray-paint-wielding youths to try to sign up social media’s latest victim, Katie Merrick, a teacher at her son’s school.

Kev Pick then read an extract from “The Machine Gun Experiment”, and if ever a reading had the audience reaching for the book to learn more, this was it! Precisely positioned metal screens; a Browning M1919 four-hundred-rounds-per-minute machine gun; a head-shattered body on a white sheet blooming with blood . . . Suicide? Quantum suicide. Not quite the same thing.

In her introduction, Rebecca mentioned that the next reader had once worked as a scarer of children on a Blackpool ghost train (apt, given the spooky weather), and Ruth Ivo duly prefaced her reading with a gentle “Boo.” Meteorology – and blood, thrashing-limbed bodies, a golden-skinned boy and a watermelon – also featured in Ruth’s story, “Bavaria”, which began with lightning striking the Berghain – a power station turned nightclub – on the hottest night of the Berlin summer.

After the break, Grace Jacobson read from her story “Take Me Out Tonight”, describing a tearful mother’s attempts to distract herself with thoughts of getting laid and fatalistic predictions (“If the car has not moved in nine seconds, then I am going to die on my way back home.”). Particularly memorable was the way shoes – strappy, shiny, expensive-smelling stilettos, toe-strained, pee-splattered, once white plimsolls – summed up their owners’ lives and carried worlds of meaning. The image of Nell shaking her bare bottom in the cool air was pretty memorable too!

Charlie Fish then took us to a different continent with his reading from “Cut”, in which a young boy undergoes “the ritual of manhood”. “A sorry-looking slug hiding in straggly moss”, a tool like a cigar cutter, “a smart clicking sound like a hammer tapping the end of a chisel”, “the sudden sensation that he had wet himself”, “the jagged trails of blood that now decorated the wood” of his chair were just some of the vivid elements in Charlie’s visceral extract.

MIRLive veteran Keith Jarrett closed the programme in his usual inimitable style with his story “Mug”, delivered in the distinctive voice of his eighteen-year-old protagonist, also named Keith Jarrett. Keith has the tricky task of explaining to the woman at the jobcentre – Janice, with her loopy, optimistic writing, “unbeweavable” hair and discreet referral to God – how he came to lose his new position at the daycentre, touching on East London (with its many places that seem to dream up America), his estranged family and the fights, characters and imperturbable business of the jobcentre in the process.

It was a great end to a thoroughly enjoyable – and weird-sky-defying – evening. If you’d like to read the stories, MIR14 is available here.

* With apologies to Ray Parker Jr.