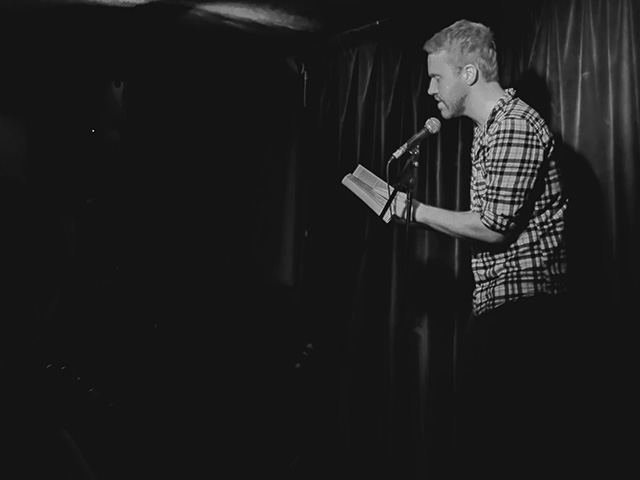 There was a buzz of creativity in the basement bar of The Harrison on Monday 1st October. A packed audience eagerly awaited readings from the Mechanics Institute Review edition 15. We were treated to extracts from eight authors, several of whom have read for us before and all were consummate performers.

Lou Kramskoy read the first half of her story, “The Front Line,” which presented the inner fantasies of the narrator, revealing the “Tiny Fighter” that perhaps lurks in all of us, but whom we repress daily. The story tells us what Tiny Fighter would like to do to colleagues at work in a humorous, yet brutal, graphic fashion. The story tapped into the dark side, perhaps always bubbling under the surface of the more passive, introverts in our communities! It was a highly entertaining piece to kick off the evening.

The next reader was the aptly named Judy Birkbeck, a published novelist, whose story “Gomorrah” evoked the experiences of naive, likeable Rainer, a German soldier, only fifteen years old and in love. The authentic details and rich description, together with touches of humour and irony made this tragic story compelling and engaging to listen to.

Kate Ellis read an extract from her short story called “At Sea,” which, it became clear, is both a literal and metaphorical title. Florence, whose girlfriend Grace returned her to hospital the last time she absconded, hears voices calling her to the sea, and is compelled to escape again. The story gave us two perspectives and two contrasting characters, introducing Derek, who is clearly too old to be motoring his boat at dusk. Kate’s original descriptions created a tenderness for both vulnerable characters which was very effective.

Anxiety and old age were the subject of Mykola Moss’ story “Between Fire and Coal” which was written in convincing dialect, perfect for performance. Bryoni and her dog are pursuing her grandfather who is lost up the Welsh mountains. His dementia combined with a guilty conscience have led him to believe that he must stop a dragon from burning all of Wales. The story was read energetically and the tension built dramatically as we became affected by Bryoni’s increasing panic.

After the break, we were treated to an extract from “The Hole.” Ian Critchley drew us into a well-crafted, surreal story about recently widowed Henry, who wakes up to discover there is a sink hole in his back garden. Out of it emerges a Troglodyte called Frank. The incipient friendship was delightfully conveyed through amusing dialogue but the light touch was deceptive. The story as a whole has darker undertones, linking it to themes of lost identity, loneliness and grief which gives it a disturbing ending.

Valentine Carter’s story “Causeway” is presented as a memory in which the protagonist moves from reflecting on events to re-telling them. The extract focussed on the first kiss between the two teenage girls which was sensitively and authentically described. Valentine’s treatment of time shifts in her story was expertly done so that the audience was never confused. The story develops in unexpected ways but it was clear from the extract that this was a key moment in the narrator’s adolescence which was being pieced together anew.

Amal Adam changed the tone to one of irritation and indignation in her story, “No, Where Are You, Like, Really From?” which gave us insight into what the narrator was really feeling beneath her smiles. Amal used humour to explore the inadequate responses of white westerners to the narrator, Noura, an FGM survivor and campaigner. She calls into question the helpfulness of the “do-gooder” who pays lip service to a cause and whose comments may be woefully misguided or patronising. We laughed with Amal, but the extract was also successfully thought-provoking and the themes extremely relevant. Noura’s character and her stance become more complex as the story evolves and we see the price she has to pay for speaking up against her cultural practices.

Arhondia ended the evening with a dramatic reading of her story “Tom Corrigan” which created a vivid picture of a small, Irish community. The story focusses on the relationship between Tom and his abusive, drunk father. It dealt with issues of class and education and the pressure of an adolescent to do what is morally right. Arhondia’s dialogue was effortlessly effective and her performance held us captivated.

The whole evening presented intriguing stories, often seething with anger or anxiety, yet delivered with a bite of humour. Clearly, the latest anthology covers a vast range of diverse styles, and ideas, which Julia Bell calls “jagged experiences” of how we live now, and it promises to be well worth reading!

Get your copy of the anthology here.