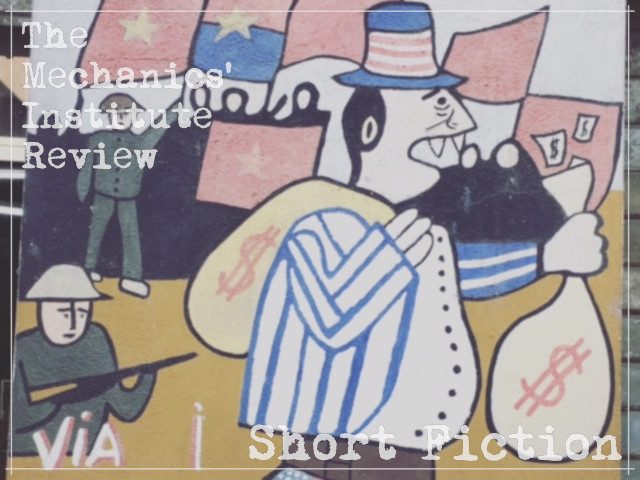 A man stands open-mouthed like a fish below a hook. His torso and muscled left arm like a cello or an angular mountain landscape pushing out to his left, as tense as a line of rope. The sun beats down. The words Oiled Dead comes to her mind as does the work of Diego Rivera and varied iterations of social realist and futurist paintings. The hook is suspended from a wooden frame suggesting gallows. An industrial measuring stick forces its way into his belted trousers abruptly. His eyes are shut. His face is a cubist annihilation, body stinking of manhood.

Near him lying dead at a shifted perspective are two other men — one wearing a soft blue and white checked shirt. It’s almost indiscernible but exactly at the mid-line the check is reversed from blue grid on white, to white hatch on blotted cornflower. This finer garment indicates what? That he’s not a worker? His head is lain flat before a flower of delicate shade, a flower of the rhetoric of peace, of the nation, or of the bourgeoisie…Maybe he has puked it out. She feels sympathetic toward him — wishes to feel the linen, ask if he is an artist. Touch his face. She feels more tender toward him than her real partner and that makes her sad. The man on the far right of the picture in a peasant shirt is hanging lopsided, draped on his back, clutching a silver spanner. He has been limply dead for a while, and his features are young, incomplete. At the fore is a jag of pink granite from the quarries covered in cursive polemic. The type of Italian stone bored Londoners dream of for new kitchens.

Morning light and thin mountain air filter her lungs, make her feel as light as one of those meringues in the pasticceria window. She stands in front of the mural for a long time and takes notes, photographs. It is off-season and she has time to sit with it alone as the sun’s intensity dials up.

Are you a comrade? The muscled man in the mural turns to her and inquires, eyes shining bronze in flat relief.

Do you mean am I a worker? I suppose not. In her conscience she noted that her family could always fund her even if she had rejected their support. She was embarrassed and felt hot. And now I’m a writer and I work teaching English. But I have to take waitressing jobs serving most evenings to cover the rent in the city. I work hard, definitely many hours. I’m never not working, I suppose…She was surprised: she disliked divulging herself at the best of times but there was something honest about the direct nature of the questioning.

Yes. Although I only do it for money. To write. I teach children. I mean, I know it’s a privilege but I lack passion in all honesty.

He turns away from her whilst extricating himself from his uncomfortable physical situation and sits down on a worn wooden bench, opens a cold beer with his fairground hands. She watches his large fingers peeling a blood orange.

She used to write by hand in thick paper journals but found the confrontation of herself within her marks too restrictive.

I write on a laptop now she confided. A computer type-writer…she added looking at him in case he was unfamiliar with the technology being a 1950s piece of artwork. But I recently started a course making pots — you know ceramic work — because of just this, this need to encounter language through the hands.

Yes, it’s a language I suppose he retorted. But really you are an intellectual and can never know about this apart from through the brain’s translation. At distance.

She noted that given another opening into life he may very well have been ‘an intellectual’ himself.

Do you not prepare food? Cook? It is practical, to live. But it is also an art. A humble art.

Yes, she agreed she at least did this. The purity of listening to oil heat in a pan, the shock of seeing the insides of cut fruit, the transformative practice of kneading dough into glistening strands. Listening to him now she resolved to remove herself from the laziness of ready-meals.

But you are a worker if you are serving the dictates of the interests of the elite. Why must you do things other than write? Surely this is a full-time occupation? Is this not valued in your society? After wiping the blood orange juice on his trousers he turns to her directly and says

Are you part of a revolution?

She took dynamite coffee in a tiny cup below a flowering mimosa. The waiter had left a glass of cold water next to it and the taste of coffee became rounded after each sip. The woman at the next table talked loudly on her phone.

But he always does this…He loves buying things maybe an addiction…Ha! No, no, that’s why she works so hard, to support him…she’s getting so thin. The collarbones…She needs a good break…Maybe the beach on Monday? I can drive. Give me some cash for petrol. I can drive us…She can drink for a change. Bring some good wine! We will take the radio and the dogs.

She found herself wondering if the said dogs liked music and if they had a preference for opera or pop. The woman talking looks like she is about to sing an Aria — pincer waist and neat bosom, immaculately dressed with tong-curled black locks.

She takes out the brown plastic bottle of antidepressant tablets and unfolds the concertinaed white paper, the origami “contraindications”. It’s possible that this is a side effect.

The worker is firmly back on the wall. His animation had been imagined. She also recalls last night’s Funghi Spaghetti and wonders about mountain produce and hallucinogens. She probably does not need these pills but she had been looking for a quick fix to match the pace of life back home. No time for robust solutions requiring a more frightening enquiry. Besides she would then have to become like a protagonist in a 19th C novel — all character in an implausible world. Our whole society medicates itself so I don’t see why I should be different. But she recognised that the latter was an untruth.

Common side effects: gastric irritability, headaches, florid dreams, feelings of dissociation. Seemingly similar to life. Was there any reason to highlight these further?

The sun is as bright as a migraine now. She finds herself facing a raft of people braving the Atlantic, approaching the New York skyline. They have Liberty in sight but have not reached the shore yet — the distance is painful. The feeling of exclusion from a land of milk and cola candy is pointed. She finds herself thinking of the new foreign policy of the right-wing elite in London and she feels shame.

Church bells ring and a man on a white bicycle eases past. The sun is now higher in the sky and she removes her jacket. She takes out her book and sketches the mural outline and then she hears the sea, the hushing and crashing of water. She smells salt and feels flecks of icy sting on her cheek. She is on the raft, it is tipping and rolling constantly and she feels sick, thirsty — the cool water from an hour ago is all she can think of. The fact that this must be a dream or hallucination is only secondary. A woman on the raft reaches out to her and touches her leg,  her slashed jeans.

Where do you come from? She asks the woman who has a face like a Modigliani, long like a stretch of coast.

Eritrea, the war. I am Christian.

The woman has a quality to her like a closed bud, there are so many tightly furled layers.

You. Where are you from? You swam to here? From another boat?

Now she feels truly in a dream although perhaps this question unlocks such parts of the mind. The woman’s face is shining and there are radiating spicules of golden light and tiny orange life jackets bobbing about her head. They move and tinkle slightly like carnival bells every time she moves her neck.

I’m from Yorkshire. It`s a mostly rural part of England. But there’s nothing left there economically anymore. I moved to London to make a life for myself but I’m not happy there.

She doubts it, knows that her politics precludes this and yet the way it has been said sparks some mote of hope that had been buried. To permit herself to think so widely, so wildly about life is brisk and shocking. She realises she felt hopeless for some time and feeling this again was like a first crush, gave her lightness and trembling shape.

Maybe she smiles back.

The cafe a few doors along starts to fasten down paper tablecloths. The scent of fresh bread makes her hungry and she turns away from the water, feeling a new obligation and freedom to appreciate hunger that can be sated. She resolves to teach English to kids living in the Calais Jungle. Something she’d not been sure was of any use until now.

Sitting at the cafe table she checks her phone and then stares at a brilliant young woman who is working, cream laptop open — a clamshell. She is classically beautiful, a Botticelli’s Venus rising up from a sea of data.

Lunch is eggs and bread. Coffee again. Not typical cuisine, but good. All in olive oil. She wipes the crumbs off the table when the waiter goes outside and steals a quick look at herself in her camera. The Narcissus impulse, although she believes that each stolen glance takes her a step further from herself. At least her lipstick is on perfectly and by luck matches the red in the painting behind her.

This landscape of mountains, pines and bone-white sand seems to be painting her into some form of sweet submission. She likes it. She recalls reading an article about a bohemian English countess who trepanned herself in the ‘70’s, hoping to expand her consciousness. Intriguingly, she had a relationship with a crow who would perch on her paisley silk-covered shoulder and caw into her turbaned ear amongst the antique furniture. She feels camaraderie with this character and her practices. She decides that the murals’ influence and presence signify something of great value. She wants to spend time with them and write a book about them. Something glows like lava inside her, a geothermal force.

The sun is lower now in the sky and she can hear someone performing a poem from the next piazza:

Fine rain falling — a long night of shadows, shadows everywhere — we collected our dead and wounded. We keep our anger close to us — like a something to love. We taste hatred as if it was our food. We may be retreating, but we`ll be back tomorrow. 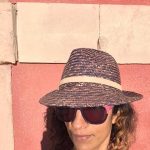 Rushika Wick is a writer currently studying at the Poetry School, London. She has an interest in exploring how social contracts and conditions become embodied. Her work is influenced by discourses around agency and deprivations of liberty – she also work as a doctor specializing in social medicine. She has had various publications including in Ambit, Cold Lips, Rx magazine and in a recent New River Press anthology. You can find her work at rushikawick.com or as @enidramp on instagram.