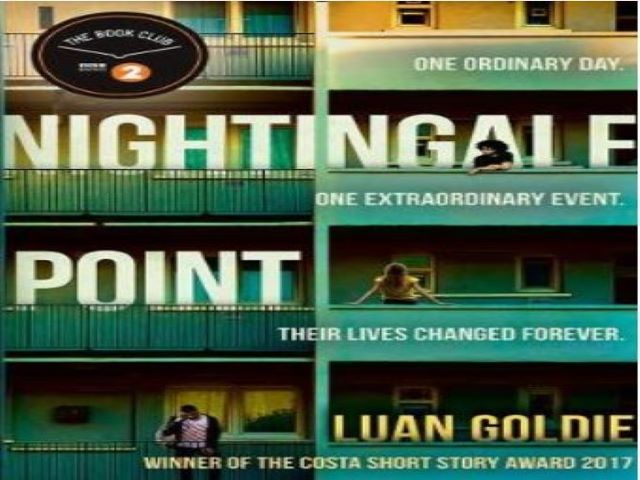 The evacuation began this morning. No sooner had the bins been collected than the hundreds of residents from the three blocks that made up Morpeth Estate began streaming away in their droves.

This, the opening sentence of Luan Goldie’s Nightingale Point, immediately sets the scene. The year is 1996 and the residents of Nightingale Point begin their day as any other. This is an ensemble piece made up of a cross section of those who live in the tower. Mary is a Filipino nurse whose estranged husband has just announced that he’s on his way back to London. Malachi feels older than twenty-one, struggling to keep an eye on his brother Tristan and keep up with his studies while nursing a broken heart; Tristan is sick of Malachi’s moping around when he should just move on from Pamela. Meanwhile, Pamela is stuck in her flat, literally locked in by her over-protective dad who wants her to stay away from Malachi. Elvis has just moved into Nightingale Point, living alone for the first time, and struggling to get to grips with the rules of this new life when everyone around him keeps breaking them, including his care worker.

Based on the 1992 Biljmer tragedy, when an El Al cargo plane crashed into two tower blocks in Amsterdam, Nightingale Point can be a tense read. Early chapters bring the reader into the lives of the characters, going about their everyday lives with only Mary having a vaguely bad feeling about what the future holds. This is where we get to grow close to them, our heart beating faster as the moment of impact becomes imminent. In the minutes following the disaster we see each character, both inside and outside the tower, living closely through those moments with them. The images, sights and smells are intricately drawn so that I found myself genuinely scared for these people I’d only just come to know. The confusion and panic feels real and reminded me of accounts of those who escaped Grenfell Tower two years ago.

This book was written before many of us had heard of Grenfell Tower but there are echoes of Grenfell throughout Nightingale Point that cannot be avoided, especially in the latter third of the novel which looks at the aftermath of the disaster. It struck me as particularly affecting that as a society we really haven’t moved on, that the problems inflicted upon those in the Bijlmer in the 1990s could still be mirrored in London today. In her author’s note at the end of Nightingale Point, Luan Goldie pays tribute to those from Grenfell Tower. What makes the fate of her characters most poignant is that, if we had cared to learned from the mistakes of the past, we might not have avoided Grenfell but there would at least be better structures in place to assist those in need.

Louise Hare recently completed the MA Creative Writing at Birkbeck. Her debut novel ‘This Lovely City’ was shortlisted for the Lucy Cavendish Prize for Fiction 2017 and will be published by HQ in March 2020. Her short story ‘Panopticon’ was written on the MA and has been published in ‘The Good Journal.’