The Solitary Seashell by Kevin Cowdall

Kestrels and Crows by Tim Cooke 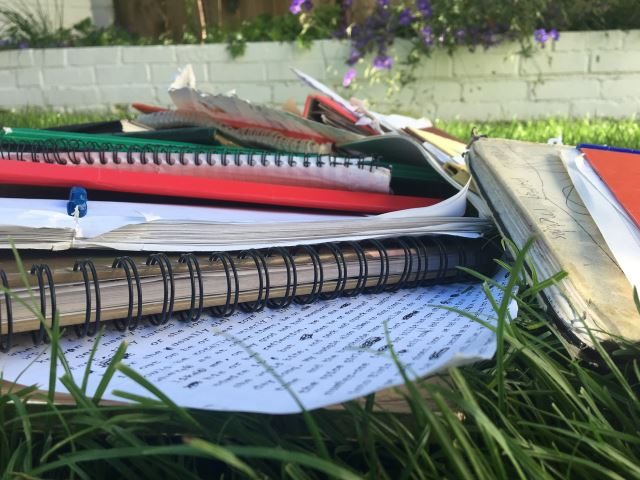 Nobody to Impress but Myself

Natalie England remembers what it’s like to write as a child.

I started writing stories when I was five years old and it was soon after, with supreme overconfidence, that I decided to call myself a writer.

I’m an only child and had a happy childhood, but I spent a lot of time playing alone and making up stories. From a very young age, my parents instilled in me a love of books and I’ve no doubt that this was a catalyst for my continued passion for narratives, in all shapes and forms. It was my reading of stories created by other people that led me to writing my own stories as a child, to asking myself the question, “Maybe I could do that?” and answering it by putting pen to paper.

Writing my own stories opened up a whole universe of possibilities. Writing put me in control. Words meant adventure and exploration, and words soon became addictive. I scribbled as often as I could. Scraps of paper, notebooks, diaries, drawing pads. I added illustrations, annotations, synopses. In my grandmother’s council flat, I wrote on the broad plastic windowsill there, and as the Brighton traffic rumbled past on the main road five storeys below, I built worlds with washable marker pens. I have a vivid memory of my grandmother, silhouetted in front of the window in a long skirt and apron, wiping those worlds away with a damp cloth.

As a teenager, writing became an escape, but it also felt like something I couldn’t take any further than a hobby. There were no exams set down or career advice forthcoming for somebody who wanted to make up stories for a living. Surely it wasn’t something I could take seriously, as a proper grown-up?

So, I did. I wrote a terrible novel. I wrote the sort of novel I wanted to read at the time, a teenage fantasy epic, which eventually reached an absurd 220,000 words. I wore out a keyboard, the white printed vowels rubbed away by my ever-tapping fingers. My ancient, second-hand computer struggled to cope, overheating and crashing at regular intervals. I laboured away at that story until my early twenties. I couldn’t stop. I didn’t want to abandon the characters that had become alive in my mind, characters I felt I knew like friends and, unlike a book which you have no choice but to close when the story comes to its conclusion, I could remain in this story for as long as I wanted. I didn’t have to say goodbye.

Looking back on that novel now, as an adult with a critical eye, I understand a lot of the writing was staggeringly awful in so many different ways but, as it was when I was five years old, the fact that it was fundamentally flawed didn’t seem to matter when I was writing it. What truly mattered was the thrill of discovering the story, the worldbuilding, the creation of a whole new universe shaped how I wanted it — a place I could withdraw to when the struggles of real life crept in too close. Writing provided the escapism I needed.

When I look to my past, at my own childhood and adolescence, I see the stories that are scattered across it: stories I read, but mostly stories I wrote. They are in the stacks of notebooks and diaries packed neatly into plastic storage boxes or stuffed into bin liners. They’re hidden in cobwebby cupboards amongst forgotten Christmas decorations and old board games. They are loaded into long-lost floppy disks and saved on outdated versions of Microsoft Word on the hard drives of broken laptops. I find unfinished, undated tales scrawled on loose notepaper when I delve into drawers, crumpled and cast aside, not quite rubbish, but not quite memorable enough to have kept to hand. I believe that writing my way through my childhood like this prepared me for beginning life as an adult writer. I didn’t understand it at the time, but by spending all those hours telling stories to myself I was gaining a basic but vital understanding of narratives and furthermore, doing my best to make sense of a world that can be confusing and fraught with difficulties at any age.

I am very fortunate that my family and my teachers, both in primary and secondary school, encouraged all this in me, possibly because I was quite patently not very good at much else. While I was passable at subjects such as art and history, the intricacies of maths and the sciences bewildered me to the point of tears and I was never interested in sports or drama. When it came to my writing, I was always supported by the adults around me, never criticised. There were no seeds of self-doubt planted anywhere, no negativity to choke my confidence. I was led to believe that was I was doing mattered; I believed that people cared, and this was an important message — one I was very fortunate to receive. Would I have carried on without this support and encouragement? Would I have acted upon the compulsion to navigate my childhood through stories if the adults in my life had sought to crush that creativity instead of nurture it? I like to think I would have gone on regardless, that I would have filled those pages in secret, scribbling away in defiance of any disapproval. In truth, I think my creative tendencies would more likely have been tempered, and those pages would have been far emptier.

With other children my age, I found my first audience and this peer interaction with my writing gave me a feeling of accomplishment that can only come with knowing your work is being recognised by others. When my teacher asked if she could read some stories I’d written aloud to the class, I didn’t worry about them not being any good; I just knew I wanted to share them and it amazed me that anybody apart from me wanted to listen. I can remember very clearly the rush of excitement and pride as the class, assembled cross-legged on the carpet, fell silent and still with attention as our teacher read out my stories and the exhilaration that came with knowing they wanted to hear what I had to say instead of a proper author; that the story was coming from one of my scruffy, insignificant notebooks instead of a shiny printed book from the classroom bookshelf. It felt like success and the writing bug nipped even harder.

I believe an endorsement from adults and peers is incredibly important to young writers. They want to be told that they are allowed to be passionate about writing, that their enthusiasm is to be admired and that those around them are interested and want to hear what they have to say. Children are used to being dismissed or feeling like their voice doesn’t matter so I think wonderful things can happen when young people are given a platform to create, to express themselves — creative writing is one such platform — and that adults can learn a thing or two if we stop and listen to them once in a while.

My experiences being a Story Mentor for Little Green Pig, a Brighton-based children’s creative writing charity, have reinforced this viewpoint for me. I am reminded of my own time as a young writer when spending time with the children. I recognise that same wild, messy adventurousness in their prose, and can relate to their sense of accomplishment and beaming pride when they finish a project and want to show it to me, to be assured that what they have done really is as special as they believe it to be.

When I was a child, just like the young writers I engage with, there was none of that now familiar creeping self-doubt, no agonising, no ego, no anxiety. I didn’t worry about perfecting each sentence, each line. I didn’t fret over theme, or voice or characterisation. I wrote spontaneously, naively and with unrestrained, sprawling imagination. I wrote for hours with the sort of dedication and momentum I often wish I could recreate as an adult.

I’m grateful for every word I wrote, for every clumsily crafted sentence I jotted down or typed into that sputtering old computer, when the act of writing was unimpeded by adult insecurities. There was nobody to appease, nobody to impress but myself, no assessment to pass or deadline to meet and the fact that the resulting product was rough and unedited and sometimes just plain dreadful was insignificant. There was no good or bad writing in my childhood. There was just writing, and the joy it brought me.

It’s a hackneyed stereotype, the anxious writer plagued by insecurities, but when I spend time with other writers, all very different people with different styles, I feel we all share that feeling of shaky uncertainty about certain aspects of our work. We all worry about the quality of our writing, our storytelling skills. We are our own worst critics.

This all makes me wonder what we, as adult writers, might gain from approaching our work with a childlike eye, and how we might benefit if we started treating our writing, and ourselves, with more kindness and acceptance. How would our writing be affected if we chose to forget about the audience for a while, put to one side that ideal reader we all have somewhere in our heads, and set about our work with more selfishness, with the aim of writing for no other reason than to experience the delight of unfolding a story? If we took a step back from our adult selves for a while and applied a mindfulness to how we work, by writing in the moment, for the moment, as children do, would this draw out further potential and set a better foundation for re-drafts and edits? Perhaps we could all do with leaving our anxieties and ego outside the door and attempt to recreate that childlike confidence when we sit down to write the first draft.

Writing is not just the act of putting pen to paper or fingers to keyboard. Writing is reading, observing, analysing, wondering. It’s not just storytelling, but storyfinding. Writing involves elation, but also rejection and frustration. It can be isolating. It requires energy, perseverance and certainly, it requires confidence and motivation, so it’s important we afford ourselves, and the fellow writers around us, that same level of encouragement and appreciation I ensure is granted to children during their workshops. By cultivating this supportive approach, we can develop increased confidence and self-belief, which in turn underpins what makes writing exciting; having the confidence and determination to be brave with our ideas, to play with words and let the imagination soar. Let the edits and rewrites, the concerns and the criticisms, come after.

I’m going to aim to keep this in mind; to try and let go of the doubts, and encourage my writer friends to keep going, and when I sit down to write those shaky first drafts, to try and remember how it felt to be a little kid with a pencil and a notebook and a head of exciting, disorganised ideas, and see where the stories take me. 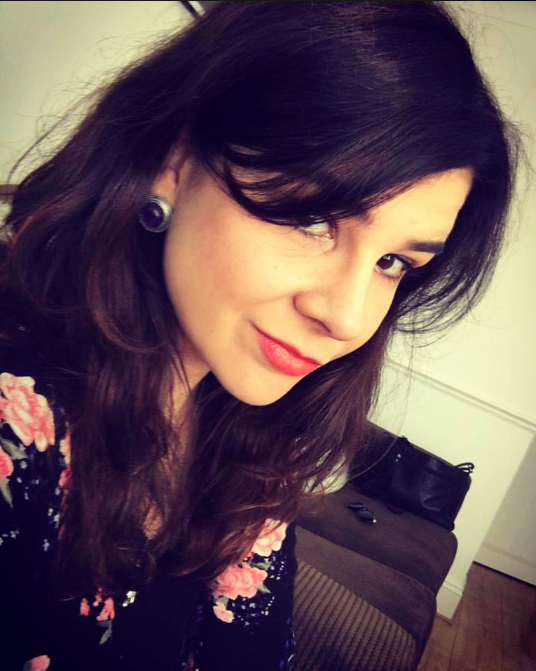 Natalie England is an MA Creative Writing student at Birkbeck. She lives in Brighton and is currently working on a YA novel. When she isn’t busy writing her own stories, she likes to help local children write theirs. You can find her on Twitter @nataliegengland and on Instagram @ngewriter