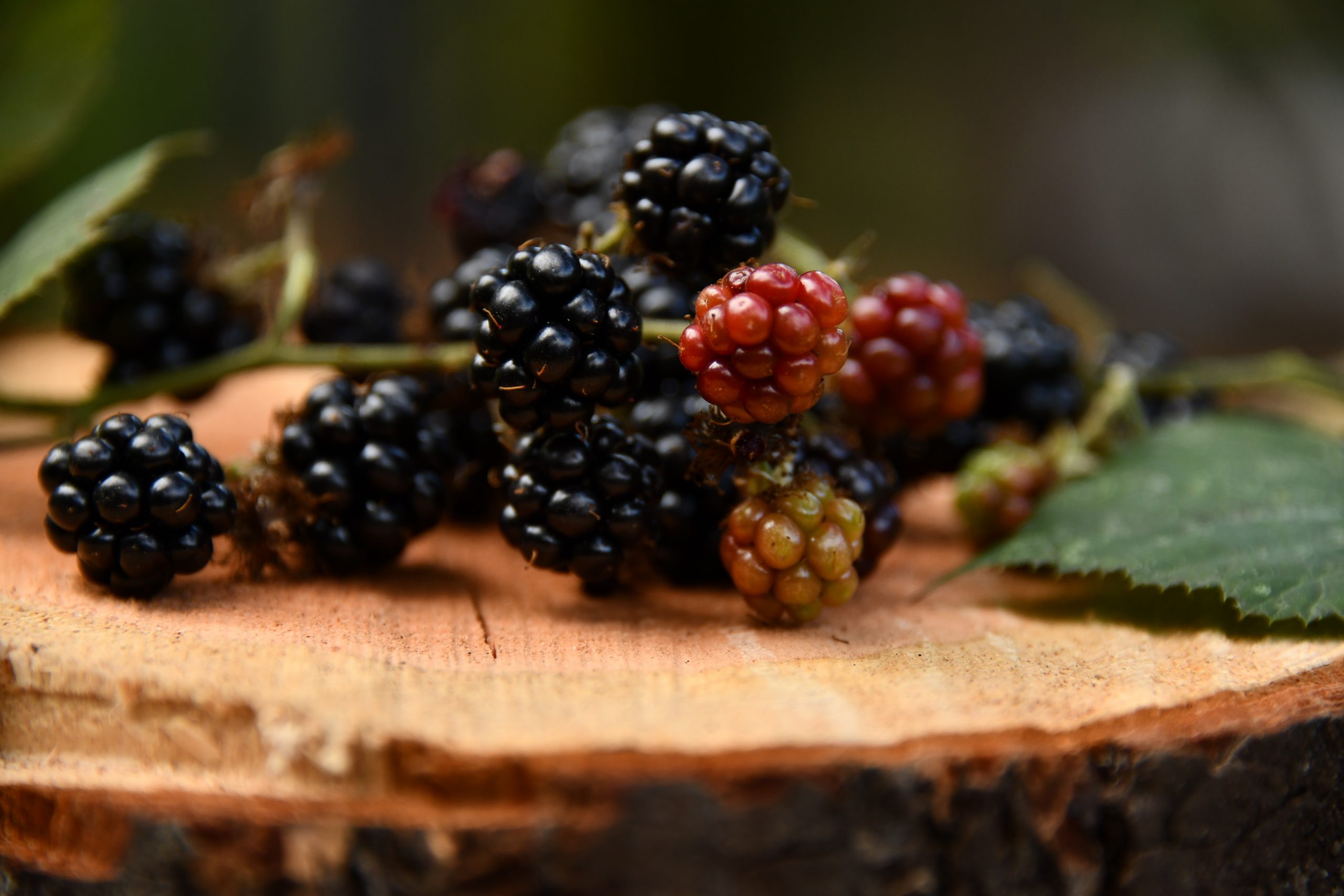 On the Phone While Blackberry-Picking by Georgie Evans

She called as I was turning the corner of Churn Lane. I put up my hood, put my back to the wind, to save her from asking me to repeat myself. What are you up to? she asked. Blackberry-picking, I told her. Bit late for that, surely. No, no, I said, the summer came late this year. Oh, yeah, she said, trying to recall her June and July. I found the fruit bushes, by smell as much as by sight, because they grew in front of a strew of Himalayan balsam. When I was six or seven, Dad showed me to wait for August, when it would take only a touch or a slight shake to burst the balsam seed pods. The smell would stick to us more than the seeds themselves and crept towards me now from this childhood time. How’s your dad? I asked. Oh, you know, she said, getting on. Silence told me the rest. I stopped on the hill, pulled some Tupperware from my little canvas bag, and began to pick. Reach and pick, reach and pick, while she told me about her new kitchen, the baby, her brother’s new job. As she spoke, the box became crowded with berries, like her voice was doing the picking, and I was only there to watch. I can’t believe about Mr Davies, she said. What about Mr Davies? I asked. Oh… She paused. He overdosed, she said. I snagged my hand on a thorn, and drops that could have been blackberry juice puckered my palm. Didn’t you know? No, I told her, no, I didn’t. Reach and pick, reach and pick. She told me about his daughter’s post on Facebook. Then she remembered the time he caught her smoking weed at the bus stop and let her off because she’d come first in the music competition. I sat down on the dry-stone wall while she spoke, looking down at the leaves and crisp packets by my feet. When did you last see him? she asked. I dropped a berry into the box. Cleared my throat. I think it was when he came to my gig, I said. When I was still in The Kohl. He asked for tickets for Nottingham and brought along his husband. I smiled. They definitely didn’t like our music. She laughed at that: You were a bit– alternative, weren’t you? He bought merch, though, I said. And five copies of the EP. I picked a couple more berries. Yeah, well, he was a great guy, she said. Yeah, he was, I said. The best teacher we had. I turned to rest the box on the wall, rummaged around in my bag for the lid, clamped it shut. Well, I’d better go, I said. No problem, she said. Callum should wake up from his nap any minute. I paused. Okay, speak to you soon. We said goodbye, and I lowered the box back into my bag, holding it in my hands as I walked down the hill to the dusty streets below.

Jesus Christ, she said. It’s too cold for walking today. You’re making me shiver just thinking about it. Well… I like it, I said, shrugging at the hornbeam in front of me. The snow’s almost gone now. I reached the muddle of brambles and peered over the dry-stone wall. The bushes are all waterlogged, I said. I hope they don’t die. She said, I think we have other things to worry about. Mm. You’re right. I stayed a few more seconds with the brambles, barren in the winter’s cold arms. Then I walked on. She told me more about Callum: his new teeth, how his hair had turned blonde from almost black, his sweet giggling. You must be loving it, I said. She laughed. I’m exhausted. I don’t sleep. I love him, she said, but it’s awful. Oh, I said. I’m sorry about that. Marching up the hill, I became breathless, so I let her speak, and I tried to listen, but the rain got into my phone’s speaker and made her smooth voice crackle. What did you say? Sorry– it went funny for a second. Oh, she said. Where are you? Just up Warley, I said. By the churchyard. What were you saying? She paused. Um… Just that Callum’s difficult, that’s all. She sighed, but I heard only a whisper of it, as if she’d turned her head. How’s your music stuff going, anyway? she asked. Well, I said. Did I tell you about that funding we got? A cyclist rustled past, slowly, his misted breath reaching out to me. She said: No, I don’t think so. Oh, well, we got some money to put towards the album. Ooh, she said. What are you spending it on? Studio costs, better instruments, promotion– that kind of thing. Buy us a laptop, will you, she said. Then she laughed in a too-high pitch. But… yeah, it’s going well, I said. Thanks for asking. I held the phone away from my ear and listened as the rainwater in its hurry became a language-less voice on the lane. Then her voice again. What was that? I saw Sammy Davies in Tesco the other week, she said. He’s dyed his hair bright yellow. I stopped. Mr Davies’ son? Yep, she said. Can you believe that? Yeah– I mean, I remember you saying that last time. Oh, she said. I bit my lip. I’m heading back to London next week, I told her. You won’t be back for ages, she said. Yeah, probably. I’ll miss it. No, you won’t, she said. You don’t miss us at all.

Take care of yourself, I told her. Yep, you too. Okay then. Okay then. Bye. Bye, she said. I turned off my phone. It was July, and for months I’d been stuck in the city with the walls, the windows. The sky had thawed and whipped white to grey to blue; a wonderful alchemy. I walked to the city library and returned with books about English plants and natural woodland. They told me the rubus fruticosus – the bramble – would be in flower this month. Its arms, wicked with thorns and serrated leaves, were prising colour from soil to flaunt at the summer. I drew them, copying photos from the Internet. I wrote a song about them. For them. Crumpled, it went in the bin. I called her. She didn’t answer. I got a text the following day saying she was busy with Callum, but we’d speak soon. The ladies downstairs were both working from home, and we’d agreed I could only practice the drums at the weekends. So, my hands itched. Really, really itched. I tore at them till they blistered and bled, and I had to fashion bandages from kitchen roll and masking tape, mending them every few hours. In the morning, the sun rolled in and blinked, with me, at my red-spotted pillowcase. From the foot of the bed I could watch the toddlers on the street being led to the nursery. Obediently hidden, I was a shade behind dusty glass. All I could think about were the blackberries. They’d be falling, covering the hill and the lane. I wished to go back home and take them, the berries trodden, blemishing my hands in that sweet nestle between ripe and decay, rotting even as I held them. I’d have dropped them on park benches. Tucked them into the collars of eager dogs. Left them at the canal, and on towards the churchyard, and on the path, and at the knotted oak tree, and the dear clean stone behind it. His names and dates chiselled there, made of absence. The berries would have fallen on his place, quiet and warm in the earth, pattering like the musical beats he taught me. I blinked. My berries fell away, and I looked again at my walls, at my window, the street below. I opened the window: put up my hood, put my back to the wind. I repeated myself. What are you up to? someone shouted to me from the street. Nothing, I said– but my voice was hoarse. I budged back inside. Bandaged my hands. And began to paint brambles on the walls.

Georgie Evans is a writer of poetry, life writing, and short fiction from Halifax, West Yorkshire. She has a BA from the University of Warwick and her current MA at Goldsmiths is funded by the Isaac Arthur Green scholarship. She was the winner of the Telegraph Cassandra Jardine Memorial Prize in 2019, the Walter Swan Poetry Prize in 2020, and has an upcoming publication in The Pomegranate magazine. Her current work-in-progress is a narrative non-fiction about deafness and dementia.