I was the creature on the spit. I danced in circles,

oiled and appetising, steaming in the sweat and smoke.

The people eyed the choicest cuts, salivated over

biceps, triceps, pecs and abs. They licked their lips,

imagining what still lay hidden. There wasn’t much,

not after they’d sucked in the very breath of me.

I was their oxygen. I pumped them up like flaccid

tyres, sent them out again into the street sated

and buoyant.  I let them feed because I had no choice.

I had been bred for this.  Each day my flesh renewed.

The show went on.  And every night, I folded like a flower,

pressed flat into a book. Only the shape of me remained.

There should have been a climax. A real denouement,

an exit with a bang. I should have left them blood and guts

to take home in a bag. Denied that last late supper, they

searched for what was left of me. There wasn’t much,

a few lost chords, a note or two, an ageing body that had

withered to a husk. They took away my skinny corpse and

watched it burn. When that was gone, they raked through

my ragged history and stuffed the ashes in their mouths.

They stared into the light they stole, fixed in pixels

on their little screens. They kept my head to illustrate

their clotted tributes. They put it steaming on a plate,

roasted to a turn. The words they wrote danced like Salome.

Ravenous, I surf the waves. The cuckoo

in my pocket twitters, greedy for a meal.

I vomit my attention in its mouth and feel

its haptic feedback fingertip me forward.

I can only tweet, birdsong into a sticky web.

No satisfaction for the hunger that snared me.

This net is strong enough to capture birds, 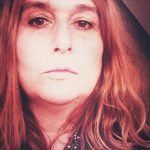 Previously PR to a politician and PA to a rock star, Clare now lives noisily in Scotland, writing her first novel, ‘Light Switch’. Recent or forthcoming publication credits include Mslexia, The London Reader, Lunate, Cabinet of Heed, Northwords Now, Spelk, and anthologies from The Emma Press and Hedgehog Poetry.