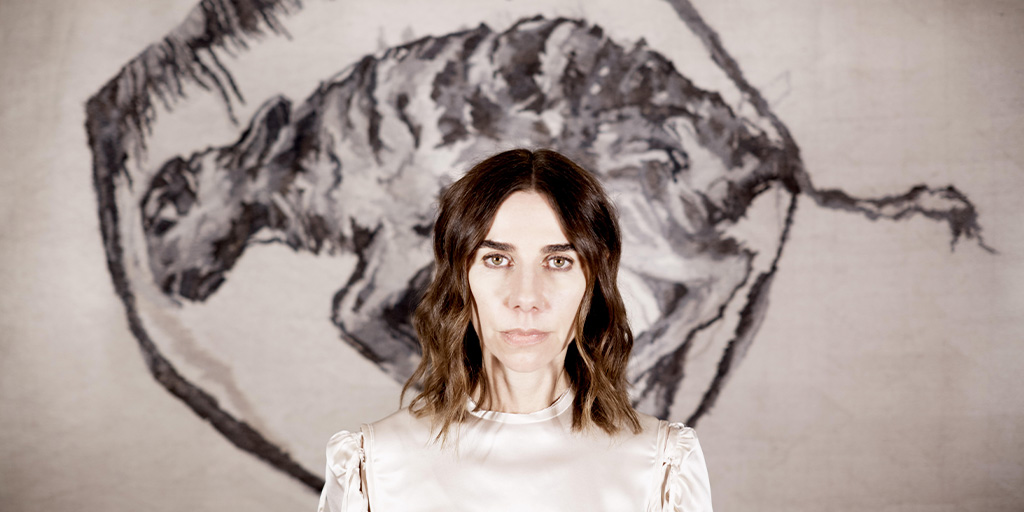 Twitter Envelope
Nine-year old Ira Abel Rawles lives on Hook Farm in the village of Underwhelem. Next to the farm is Gore Woods, Ira’s sanctuary, overseen by Orlam, the all-seeing lamb’s eyeball who is Ira-Abel’s guardian and protector. Here, drawing on the rituals, children’s songs, chants and superstitions of the rural West Country of England, Ira-Abel creates the twin realm by which she can make sense of an increasingly confusing and frightening world.

Orlam is an exploration of Dorset myth, woven into the changing of the seasons. There are two worlds in Orlam – The first is the real world (farm), the second world is made of dreams and visions (the woods). We meet Ira, the child, and less frequently but still present, Ira the adult, looking back.

Harvey takes to the mic and explains that she will read a few poems from each month. Opening with ‘UNDERWHELEM’, from the January section, we are introduced to characters, places and language, all unfamiliar but instantly alluring. Of the selection read, twelve poems are set to an ethereal underscore, composed by Harvey. The music gives the already visceral words, new life. When Harvey later breaks, to discuss the creation of Ira and her world, the drive to give this work a life of its own, becomes apparent. There is a vast difference between writing lyrics and writing poems, Harvey suggests. When writing lyrics, music does half of the work for you; happy or sad, it builds the world around the words. With poetry, the information is there on the page with little assistance. It is in the reading. The reading breathes the life and emotion into the work. Whether you are fortunate enough to hear a poet read their work, or whether the aforementioned life is the meaning and significance you take from a piece of writing – it is all in the reading.

As she reads, Harvey barely glances down at the text, reciting almost all of the poems from memory. She inhabits the farm, then the woods, building the world for the audience as she goes. Illustrations found within the book, drawn by Harvey, are projected behind her as she reads. The poems, the underscore, the line drawings – these elements combined, create an immersive experience that takes hold. The poems take us through the seasons with ease, leading us to ‘Prayer at the Gate’, dated 1st January. The last poem of the collection is where the reading ends, a year in the life of Ira.

Orlam is written in Dorset dialect and Harvey reads it this way. Each poem has an English translation on the right page, but the attention to detail does not stop there. There is a translation for every poem, but the fainter the writing, the less need for the translation there is. If, like me, you are unfamiliar with the Dorset dialect, the challenge is to read and decipher what the poem is about, without cheating and looking at the English translation first, as this takes some of the otherworldly magic away. There is a clear and serious commitment in this work. The book is steeped in local, historical and mythical knowledge. The eight years of research, practice, workshops, courses and mentorships are evident. William Barnes’ Dorset dialect glossary spans fourteen pages at the end of Orlam, which allows you to grasp a better understanding of the words – and pick up a few – before a second read, if you’re so inclined. Harvey notes that when writing, it was as if half of these words were already in her system, like revisiting elements of childhood, lost but not gone. This parallel set of words already within her heritage, was within her. It didn’t feel like learning, it felt like remembering.

Childhood is where Orlam takes us. An intricate character list introduces nine-year-old Ira among many others including, her guardian and protector, an all-seeing lamb’s eyeball named Orlam. Along with the cast of enchanting characters, footnotes line the pages with wild descriptions of the minutiae which are playful and charming.

‘Hair was never to be carelessly thrown away, because if it was used for lining a magpie’s nest you would be dead within a year.’ – from ‘Cutting with Kane’.

Footnotes such as these leave you unsure whether they are complete fiction, created by Harvey for the book, or whether the origins go deeper. I suspect a bit of both. Either way, the footnotes do a great job of keeping the belief in folklore and the unseen alive.

The world of Orlam is shown from a child’s viewpoint, allowing a sense of wonder and a sense of truth to shine. That sense of wonder is unlocked during the reading, the audience are captivated, there is absolute silence except that of PJ Harvey’s voice accompanied by her enchanting underscore. The atmosphere is electric as each new poem begins. Harvey notes that as a creative, the dream world and the imagination are never very far away. Those places are where the work is drawn from. Adults often close that side of themselves down, or unfortunately have it closed them for them, but that wonder, that magic is still there, just waiting to be set free.

Orlam is published by Picador Poetry.

AMY RIDLER IS A WRITER AND ENGLISH TEACHER IN EAST LONDON, WHERE SHE RUNS THE LGBT+ SOCIETY. SHE HAS WORKED WITH THE QUEER, FEMINIST, LIVE ART THEATRE COMPANY CARNESKY PRODUCTIONS AS AN ASSOCIATE ARTIST SINCE 2009 AND CONTINUES TO BE A MEMBER OF THE COMPANY’S ADVISORY BOARD. SHE IS CURRENTLY AN MA CREATIVE WRITING STUDENT AT BIRKBECK.
AMY IS THE MANAGING EDITOR OF MIR ONLINE.