She Herself is a Haunted House by Georgia Poplett 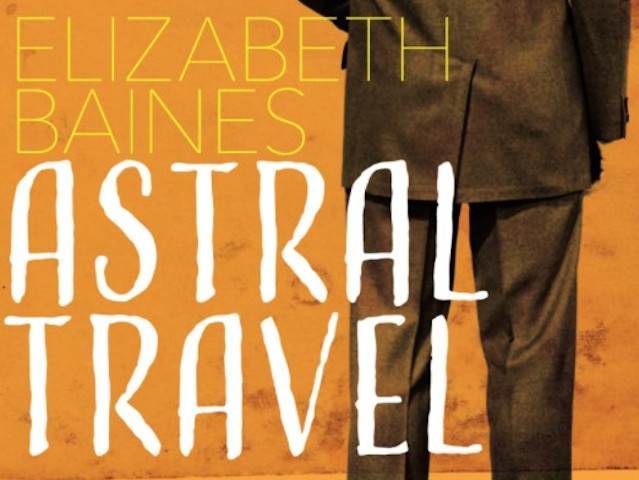 My Grandpa wrote a memoir during Lockdown. An ex-pat in Thailand, his prohibition from England after thirty years of self-imposed exile came as a shock. Despite a near six-thousand-mile distance between his home and his family, the UK’s relaxed position toward its emigres seemed never to have made his emigration feel real. Trapped in his house with a thousand free hours, there was thinking to be done. These thoughts, with their novel revelations, were delivered to us bi-weekly by email and kept us connected like a thread half-spanning the world.

Mentioning my Grandpa, here, may seem strange. But it would not seem so if you compared his work to certain aspects of Astral Travel, the new novel by Elizabeth Baines. A metafictional novel, Astral Travel traces the life of the narrator, Jo, as she attempts to write a novel about her long-dead father. What transpires is a sometimes charming, sometimes troubling family history, spanning two generations and four hundred pages.

Astral Travel is, in certain instances, intriguing as a text concerning writing. The framing narrative describes recognisable markers of the writing process, the construction of images and narrative, all the way through to release and reception, in a way that published writers (or those who wish to be) will recognise. However, as contained in the title, the text seems to concern itself more with the abstract, meandering process of memory than with a rigorous interrogation of the creation of fiction. Furthermore, the objective stance of the ‘astral traveller’ which the author of a book theoretically inhibits, can be considered tethered to the issue of family life, with all its subjectivity. In many ways, the text is more memoir than a novel.

Baines’ author, Jo, writes her father’s life and, through engaging with him, has to revisit both pleasant and unpleasant memories. Whether you have a father or not, one only has to consider the concept briefly to know that he, whoever he is, taps a well of emotion against which all the figures of one’s life contend. Jo’s account of her father excels in illustrating the intensity of this bond. However, at times, this is to the detriment of her artistic abilities, which fall by the wayside against the desire to relay information. Jo’s gushing desire to document “the story of our father falling down the side of a ship”, or the mysterious “letter from Aunt Lizzie”, as well as many more tales, sometimes results in fruitless vignettes rather than vivid, meaningful illustrations. The effect is of a patchwork blanket. Multiple charming instances that evoke alternately warm and cold reactions, but studied in succession, the reader is sometimes left reeling, perhaps underwhelmed.

I expect this feeling of disappointment, comes in part due to the nature of life in general. Life, for anybody, is to differing degrees extraordinary or dull. Memoirs are popular, however, due to the writer’s ability to present their life in a stimulating manner. Reading my Grandpa’s memoir, I gain a particular excitement due to the sense of a personal impact the events could have upon me, as well as expanding the biography of a man I consider myself to know well. However, I suspect, to the unacquainted, these events could elicit indifference or even boredom. Unfortunately for Astral Travel, Patrick, the father, fails to merit the sort of charisma which renders the administrative, or even amusing parts of his biography gripping. The fact that the text is a novel rather than a memoir, then, is significant when one remembers its resemblance to the latter genre. Memoirs can be perfunctory, as well as cringingly subjective. In my eyes, these are not traits of the novel genre, and the author could have done with demarcating herself from the memoir, perhaps by exploiting her metafictional angle.

Despite these blips, the book has much to offer its reader. Baines’ navigation of religious, regional, and national identity is deft, informed by concentrated historical research which anyone belonging to the text’s various diasporas will appreciate. Representations of the various family relationships are thorough, too, transforming the text into a source of solace for the many thousands reading from tumultuous homes. While not as thrilling as the metafictions of Chris Kraus or Kurt Vonnegut – in fact, I would suggest the text is only tenuously metafictional – the novel stands proudly with the traditional coming-of-age, family-orientated novels of Dickens and Allcot. My issue with this is the genre’s safety and its relative proliferation in recent years. There is something all too familiar about it. Similar to the work of Zadie Smith and Ali Smith, but thoroughly unchallenging, the text sinks compared to its more famous contemporaries.

You can purchase a copy here