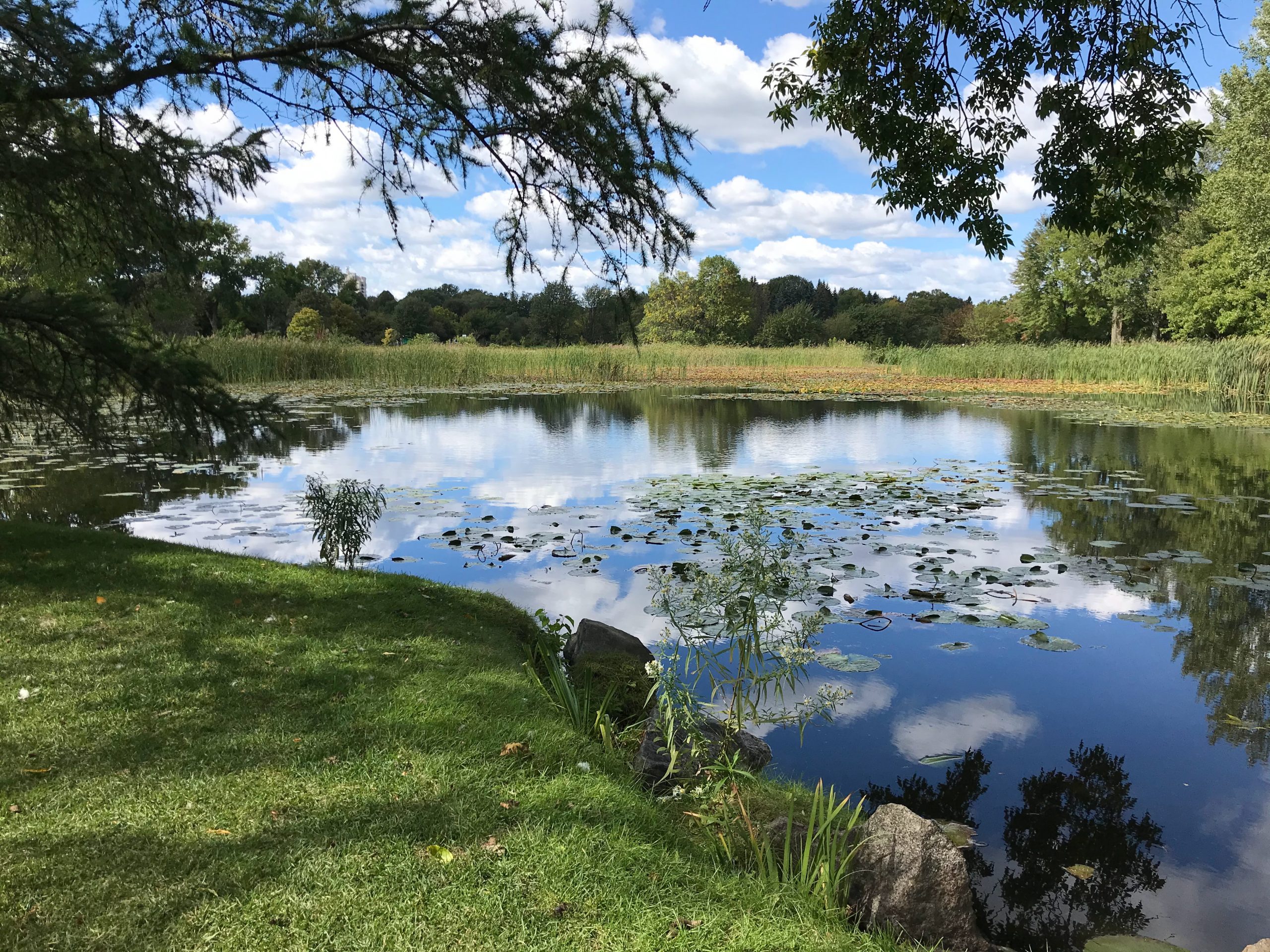 Review: A Swim in a Pond in the Rain by George Saunders

What Four Great Russian Writers can teach us

The best stories have a mystery in them that I often wish I could ponder in the company of another pondering person, to discover if another has been as mystified, saddened or caught up as I. In A Swim in a Pond in the Rain, George Saunders’ treatment of seven nineteenth-century Russian short stories, that wish of mine is generously addressed.

At first reading, I simply enjoyed the impression of Saunders thinking aloud about the stories, picking through scenes, searching for what lies beneath them, how they work and – crucially – what an aspiring writer can learn from them. This is how, over twenty years, Saunders has tried to help his students at Syracuse University achieve what he calls ‘their “iconic space” – the place from which they will write the stories only they could write’. A very seductive proposition.

As a teacher, Saunders is companionable, open, and writes informally with frequent – perhaps too frequent – guess whats and jeezes. ‘Some of the best moments of my life,’ he tells us, ‘have been spent teaching that Russian class.’ Along with his engaging enthusiasm, there is an engaging anxiety to make sure we don’t switch off. It’s reminiscent of how his own stories keep us ferociously gripped from paragraph to paragraph, while often harbouring a soft heart in their centre. In A Swim, almost every new idea is illustrated by a vivid, and/or humorous analogy, such as the man using index cards on a date to remind himself how to converse (to underline the unhelpfulness of plotting). My favourite analogy points to how a story can (and should) ‘outgrow its early understanding of itself’.

‘…stop aiming at the target and concentrate on the feeling of the arrow leaving the bow… the arrow sails off… and keeps adjusting course, and wherever it lands… that’s the target’.

If the search backwards through the just-read story seems, very occasionally, a little laboured, that could be understood as an inevitable consequence of trying to extract solid rules about writing from the mystery that is a story. The ‘arrow’ advice delighted me because it seems to throw out rules and allows mystery to return to the work. Variations of this advice have come from other writers. ‘When you’re writing a story and there’s a phantom one underneath,’ Kevin Barry says, ‘that’s the one you should be writing.’ ‘The craftsman knows how it will end,’ says Auden. ‘The artist doesn’t till… the end’. Even Einstein has a version, which Saunders quotes: ‘No worthy problem is ever solved in the plane of its original conception’. Nevertheless, as elsewhere, Saunders creates a fresh image for this idea, and gives it new life.

Except for the first story – In the Cart, which is fed to us a page at a time to alternate with pages in which Saunders takes ‘stock of where we find ourselves’ – we are given each Russian story whole to read in one go. (I would have preferred that for In the Cart too, which, read in chunks, seemed merely depressing, but reread complete, regained a flow that lifted it from its muddy landscape.) Each story is then followed by a painstaking, but expansive analysis, which in turn is followed by more personal thoughts on writing.

Saunders has explained that these stories are neither the best Russian stories necessarily, nor his favourites. They’re chosen ‘to support a (hopefully) coherent meta-lecture about the craft of the short story.’ That leads me, at the risk of seeming pedantic, to try identifying the main craft-point Saunders garners from each story.

Reading Anton Chekhov’s In the Cart, I confess that my inner sixteen-year-old longed for Marya, the downtrodden schoolteacher, to hitch up with her attractive but hopeless neighbour. Saunders demonstrates how a story can raise expectations repeatedly, but a good story will resolve those expectations in unexpected ways. When, finally, Marya experiences a brief, joyful moment of revelation, it is not the moment of change we expected, but a more truthful one that alters our perspective on what has gone before.

The Singers, by Ivan Turgenev, is cleverly used to show, both through the story’s events and Turgenev’s writing, how ‘if the audience is moved, technical deficiencies are… forgiven.’ I was indeed stirred by the less technically proficient singer’s triumph at the end, and not too bothered by Turgenev’s earlier ‘technical flaws’ of lengthy character descriptions.

The Darling, again by Chekhov, is described by Saunders as a ‘pattern story’, whose controlled variations in each return of the pattern creates ‘escalation’. Escalation is perhaps the craft element of writing on which Saunders places most emphasis, an emphasis that has been questioned (by Chris Power’s New Statesman review for one), because, at least in Saunders’ own stories, it tends to lead of necessity to death and destruction.

I must confess that neither Olenka, the protagonist, nor the story’s repeating pattern convinced me, and though there were variations and a turn towards darkness at the end, those slight variations seemed like almost the opposite of escalation. Was this a good illustration of a story ‘outgrowing its early understanding of itself’? Surely with this story at least, the pattern was clear in Chekhov’s mind as he began writing it, because that was the very point of the story?

Some years ago, a visit to the Russian circus made me gasp at the acrobatics but frown at the clowns, who inveigled unsuspecting audience members into the arena and made them look grotesque. That was Russian humour? A similar squeamishness came to me as I began The Nose by Nikolai Gogol, and encountered the nose that had been baked inside the bread. Would this be more of the same grotesquery? No, I discovered as I read on, it would not.

James Ley, the Australian critic, calls the story ‘brilliantly bonkers’. That short, apt description contrasts with Saunders’ earnestness as he walks us back and forth through the tale’s weird impossibilities, inconsistencies and ‘improper narrative emphasis’. ‘But a story can also be truthful,’ he reassures us ‘if things happen in it that don’t and could never happen in the real world.’ Absolutely. Saunders’ ultimate lesson from this story is to ‘follow the voice’. That is what he believes Gogol does, what makes an unreliable narrator part of the story, and what allows Gogol to look ‘past the way things seem to how they really are’.

‘There’s something familiar and terrifying about Gogol’s dreamworld’ Saunders also writes. I warm to this simpler point. This story works the way a dream works. Its events and images are outlandish, but the emotions – the anxieties, illusions and confusions – they produce are real. ‘If you are interested in “ideas” and… “messages”, keep away from Gogol. Keep away, keep away,’ writes Nabokov with beguiling, electrifying passion. Gogol’s dreamworld, he says, ‘appeals to that secret depth of the human soul where the shadows of other worlds pass like the shadows of nameless and soundless ships’.

Gooseberries, the third story here by Chekhov, contains the scene from which Saunders took his book’s title. One of the characters is swimming in the rain with deep delight, while his friend shows obvious impatience to move on. Later the swimmer will lecture against happiness.

Why did Saunders use that as his title? ‘To me, that’s Russian literature: contradictory and very comfortable in the land of ambiguity’. The ‘persistent self-contradiction’ in Gooseberries is an example of a story not trying to ‘prove anything’ and being richer and more human as a result.

The last story is another by Tolstoy: Alyosha the Pot. We never learn exactly what lies behind Alyosha’s cheerful obedience. By declining to reveal his inner feelings, Saunders says, the story is ‘not avoiding the question, but irradiating it with increased intensity.’ It leaves us wondering. This, for me, was one of his more fascinating ‘craft-points’. This opens and closes the doors for writers in interesting ways. Robert Louis Stevenson (admired by Nabokov) saw this too. ‘There is but one art,’ he said ‘to omit. If I knew how to omit, I would ask no other knowledge.’

Finally, something few reviews mention: the writing exercises Saunders provides in the appendices are truly interesting, and unlike any I’ve yet been given in a workshop.

In his sharply clever review of A Swim, James Ley complains that much of Saunders advice is ‘standard writing-guide fare: express yourself efficiently… the better part of writing is revising’ etc. This seems very unfair. Yes, Saunders also advises those things, but the main ‘craft-point’ he extracts from each story is different. To summarise, they are, in order of story:

Each is a specific, practical, important craft element, given extraordinary life by the Russian story that illustrates it, and brought to us by someone whose love of writing is evident on every page.