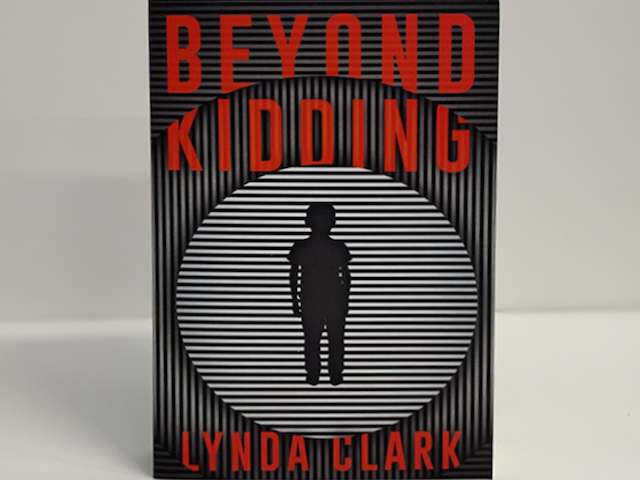 Review of Lynda Clark’s ‘Beyond Kidding ’ by Miki Lentin

I’ve read little sci-fi, and if I’d picked up Lynda Clark’s debut novel Beyond Kidding in a bookshop and scanned the blurb, I may well have put it back on the shelf. But when I was sent Beyond Kidding to review there was something about it that intrigued me. Maybe it was that we both used to work at the British Library and I’d heard of ‘The Memory Archivist’ project that she won a British Library Labs Artistic Award for. Maybe it was that Clark’s writing is compared to Kurt Vonnegut and Douglas Coupland. Maybe I was just interested, what with such a crazy premise, to see if she could pull off.

As I read Beyond Kidding, I realised that this was not your everyday premise, and it wasn’t sci-fi, or did it even matter? To me Beyond Kidding was much more of a story about Rob, someone in his thirties, even though I don’t think we find out how old he is, who seems lost, helpless, slightly aloof and is just a bit useless. Throughout the book, Clark paints characters that despite being seemingly dull on the surface, are much more complicated. He’s certainly not “unlikeable”, as one reviewer said in an online review, he just doesn’t have much going for him. His best friend Bummer is equally dysfunctional, apathetic and blames others for every bad turn he takes.

And yet, there was something about Rob that I found very absorbing. Throughout I got the distinct impression that he wanted to escape from something, that he wanted some excitement in his relatively boring life doing a corporate office job, living in a one-bedroom apartment in a non-descript suburb somewhere, and being single. So to me, this became a story about how someone wants to take risks because he sees others around him with what he wants. And like any good liar, once he starts taking risks, he doesn’t seem to be able to stop, and continues without quite realising or understanding the enormity of what he is doing.

Beyond Kidding opens with Rob attempting to explain the story of what happened with Brodie to his colleague Jules. Used throughout the book, this concept works well. After each episode, Jules and Rob comment on it, as if they can’t quite believe themselves what Rob has done and wonder what he should have done differently. They give off the impression that they are an audience watching a film and discussing it in the pub afterwards. But it’s also cleverly used as a way of explaining from Jules’ perspective why she thinks Rob did what he did.

Things get a bit out of control when Brodie is taken in by Rob. At that stage, the dialogue starts to zip a bit more. Often hilarious and packed with plenty of filth and bad language, which is a bit over-used sometimes, it adds a certain craziness to the situation Rob finds himself in. All of a sudden Rob is living with Brodie, a child that isn’t his, and he has to explain to everyone, from his family to his work colleagues, why this child has appeared, and where he’d been all this time. I won’t spoil the ending but suffice to say that Clark manages to satisfactorily bind things together in the last few chapters.

Saying that, I’m pleased that I chose to review this book. It opened my eyes to something completely different during lockdown, and often made me laugh out loud. Lynda Clark has managed to pull off a strange but in a way heart-warming story about Rob, who shows us how he can rise above being seemingly hopeless, boring and useless, to someone who can lovingly look after a child.

Beyond Kidding, by Lynda Clark, is published by Fairlight Books and is available to buy here.

Lynda Clark is an author and creator of interactive fiction. Her short story, “Ghillie’s Mum” won the Commonwealth Short Story Prize for Europe and Canada in 2018, and was shortlisted for the BBC Short Story Award in 2019. Her debut novel, Beyond Kidding, was published by Fairlight Books in October 2019 and was optioned by Film4 in June 2020. Her first short story collection is forthcoming from Fairlight Books in Summer 2021.

Miki Lentin recently completed his first novel while doing an MA in Creative Writing at Birkbeck, University of London. Originally from Dublin, he lives in London with his wife and two daughters. Having previously run his own café and built a house with his wife, Miki currently freelances as a consultant in the creative sector. Miki took up writing while travelling the world with his family a few years ago, and this year was a finalist in the 2020 Irish Writer’s Centre Novel Fair. As well as writing his first book, he writes short stories and book reviews for MIR Online, and dreams of one day running a café again. @mikilentin