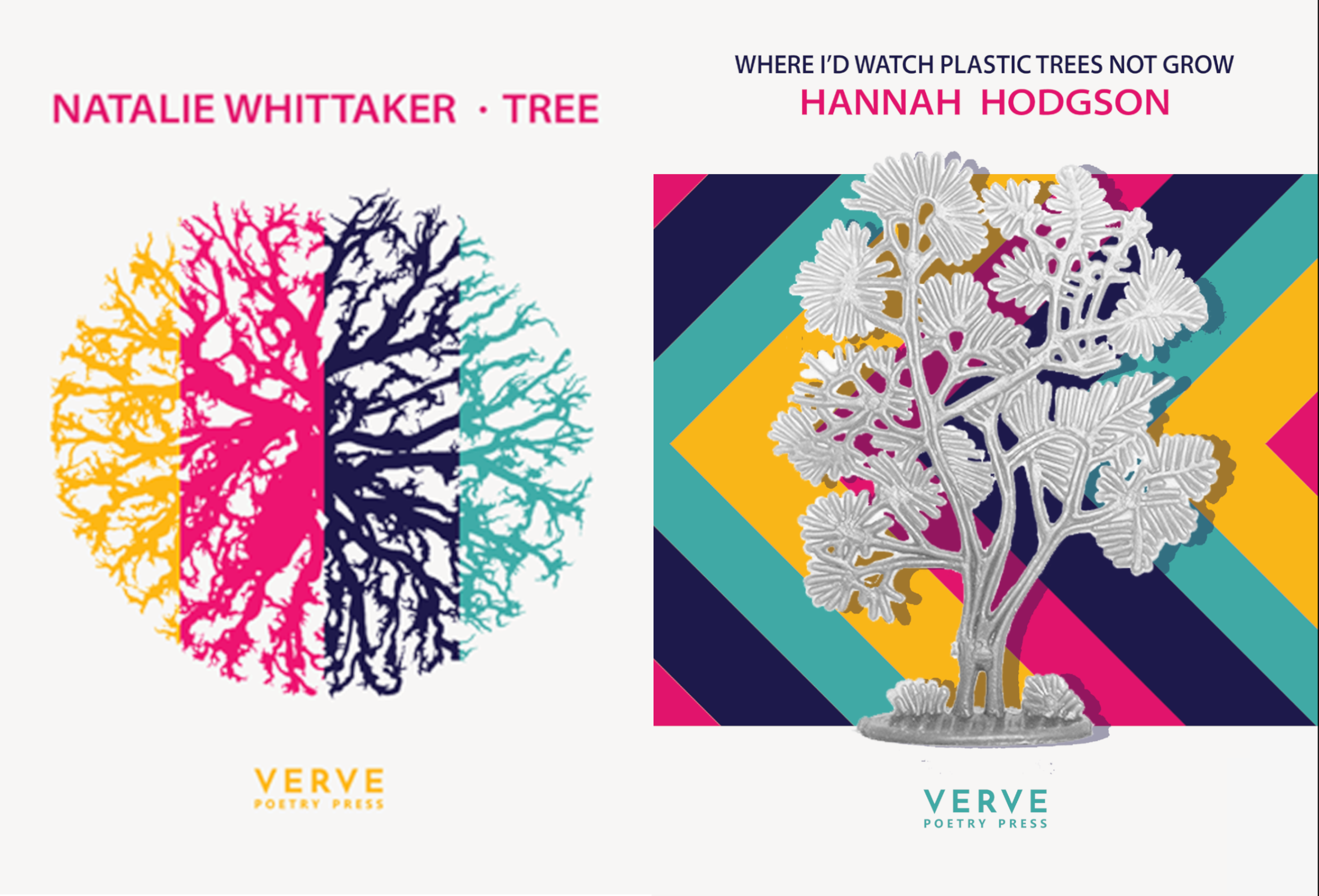 Tree, the second pamphlet from Natalie Whittaker, explores personal tragedy and the terrible reality of stillbirth. In an incredibly moving opening poem, Tree, for which the pamphlet is named, the first thing we realise the poet has lost is time. ‘One day I wake up and it’s November’

The poems that follow are short and carefully crafted; each line, each word given attention. As if they, like each human, are precious and deserve all our concentration and care.

The pamphlet is structured as a narrative, filling in the time she has lost in stark fragments. Whittaker offer us poetry like her ‘winter branches.’ The unpunctuated words are like the black skeletons of trees against a white winter sky. Long spaces, as if for thought or grief, inserted into the lines.

Images of trees bookend the pamphlet, offering a certainty and predictability against the chaotic and illusory experience of loss. ‘Sunlight through cherry trees’. ‘A contagion of blossom’.  Yet the images in the heart of the pamphlet are drawn from the shoreline or from conflict. ‘A tide of blood’, ‘a frozen beach’, evoke places where things, like ‘the blue shell of a blanket’ are lost or left behind. In contrast visceral images such as the brilliant ‘my womb is a fist’ or ‘landmines waiting under fields’ show us her anger. Through these images Whittaker’s poems alternate between pain and anguish, grabbing at our feelings, not allowing us to sit still, attempting like Denise Riley to articulate something of time lived without its flow.

But perhaps the most powerful poems are the prose poems which plant us firmly in the moment by offering us the shocking, unadorned truth of her experience. Sands takes us into a meeting of mothers who have experienced the death of a baby. And Departures 1, the first of a trilogy that act almost as a fulcrum for the pamphlet, shows us the couple leaving the hospital without their child and like Sands, features the desolate, almost purgatorial image of the car park.

Having recently had a child of my own this pamphlet moved me profoundly. Whittaker, without slipping into melodrama or becoming reliant on catharsis, shines a clear white light upon an often secretive, too painful to discuss, event, which in the process adds much to our shared experience as a society. And, although we begin in pain, incredibly, we end on a positive ‘I switch the radio on / a beat says      mum /live live live’

In contrast Where I’d Watch Plastic Tree Not Grow by Hannah Hodgson inverts nature to expertly capture her alternately surreal then shocking experience of hospitalisation.

Here the trees are not real, but plastic, each fruit is a ‘crystallised diagnosis’. Then, in turn, lightbulbs have a ‘glass shell’ and the poet tells us ‘I’ve become a tiger, and this ward is a zoo.’ Through this inversion Hodsgon cleverly reveals the unnatural but life-saving world of the hospital. She maintains this remarkable conceit through the pamphlet. Nature is not celebrated but challenged by humans who have the almost godlike power to manipulate, to change the course, to save lives. Here the people are trying to gain control. We are given images of a mown lawn, orchards, police officers, and zoos.

This is a refreshing view we rarely hear in a modern world often obsessed with returning to nature or evangelising, from a position of safety and health, a natural world which can be incredibly cruel and unfair. Instead, the world is viewed with the unflinching gaze of someone who will survive, despite the odds and, who has to believe in the certainty of escape, ‘meet me at midnight with the bolt-cutters.’

Yet, moments of vulnerability remind us not to take this or the poetry for granted. ‘I’ve seen my consultant cry once. / When she couldn’t save a life, deserted by her superpower.’

Regularly, these poems disarm you. On the surface, they are simple, there are no clever tricks, no reliance upon unusual syntax or form. The poems look like poems – couplets, tercets quatrains. They are all neatly punctuated, which again almost feels like a brave choice in a world when it can be so hard to get noticed. But these choices mean that there is nothing to cloud the individuality of Hodgson’s voice, which needs no embellishment. The poems are funny, but the humour means that the moments where Hodgson is serious become even more striking and are received by the reader as hard-won, witnessed fact.  As in Death Rattle when she calmly notes ‘Natural death isn’t quick’ or in A&E, England, Jan 2020 ‘He was on a trolley in the corridor / as his body began hardening slowly / setting like air- dried plaster.’

‘We are a people who know the definition of terrible.’ Hodgson writes in We the Grieving but, as both she and Whittaker confirm, there is always hope if you have an articulate voice, for then, people will listen, and your experience was not for naught.

Buy a copy of Tree here

Lawrence Illsley is an award-winning Cornish poet. His second collection A Brief History of Trees, won the Live Canon Collection Competition. He also won the inaugural Beyond the Storm Competition. His writing is concerned with the ecology of place and the experience of loss. He is poetry editor at The Mechanics’ Institute Review. Find him on Instagram @abriefhistoryoftrees or Twitter @Lawrence_poet