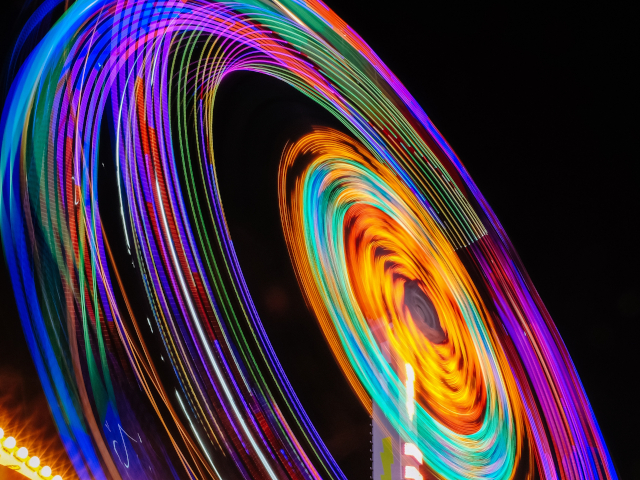 Maheen is the first to go in, as always. They gawk at the strange booths – the Poison Dart Frog game, Ringing-in-the-Ears, Hook-a-Lung.

Something flaps at the periphery. A tattered orange bead-curtain almost hides the rainbow-striped sign for the Teacups of Nostalgia.

They clasp hands and peek inside the dusty portal. One zinnia-patterned cup still moves around the track, the others cracked and immovable. Trithi pulls them forward as it slows; she’s the one that tells the stories of how they all met.

They clamber inside, Maheen brushing a spider-web off her indigo headscarf, Trithi trying not to inhale too much dust, Alysa careful in her suede kitten heels.

They’re flooded separately with the morning of that day at secondary school. Trithi’s mother stayed in the car to watch her slowly walk up the stairs, Maheen ran past still eating her breakfast toast, Alysa strode along while reading Nancy Drew. And then the infamous netball game when Trithi got detention because the newly-minted P.E. teacher didn’t believe her medical exemption note, and Alysa and Maheen refused to play in sudden solidarity.

The Ringing-in-the-Ears is a black-walled sealed booth that absorbs all Alysa’s problem-solving skills.

There’s a catch along a hidden seam, and the cobalt-blue door slides shut behind them. It’s all the things people whisper on repeat. Alysa, brush your hair till it shines, you look prettier when you smile. Maheen, stop waving your hands around, say it again a little quieter. Trithi, computers are demanding, do you need a sit down.

Trithi tilts her chin up as if it’s a sword, Maheen sways as if to music, Alysa holds her neat soft hands against her eyes as if that will press the tears back in.

The threshold of the Future-Train is a wide red-lipped mouth. Trithi’s still-raised chin leads her forward, although the others shrink back. She sits in a velvet-lined booth and watches Maheen wave her way through university, remove her hijab during her Legal Practice course, put it back on after a woman is shot and stabbed in the street by a man shouting ‘Britain First’. Alysa wipes mango chutney off the twins’ mouths as they chase after Maheen’s daughter and her shiny plait undulates as she straightens books at the library. The plait lies on the floor the day after Trithi’s funeral.

Trithi settles back, sees herself learn to code and make websites. Future-her plants Easter eggs of photos of them all. They find them years later, after the thyroid cancer, seeded by the x-rays to fix the hole in her heart, rewrites her in pieces. 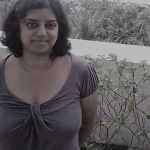 Anita Goveas is British-Asian, based in London, and fueled by strong coffee and paneer jalfrezi. She was first published in the 2016 London Short Story Prize anthology, most recently in JMWW, OkayDonkey and X-Ray lit. She’s on the editorial team at Flashback Fiction, an editor at Mythic Picnic’s Twitter zine, a reader for Bare Fiction and tweets erratically @coffeeandpaneer Links to her stories can be found here.