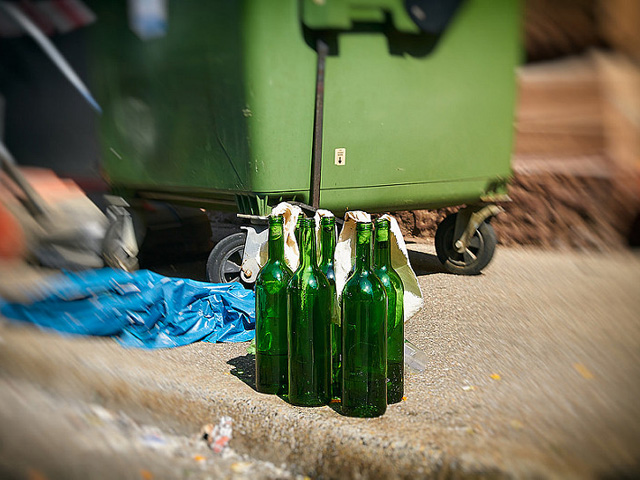 Signs of Trouble by Gwenda Major

A huddle of lads on the deserted streets. Houses sealed with metal shutters. Galleries of grafitti on fences. Gardens where a few spindly roses grow among the junk.

One of the lads kicks at a can in the gutter. Another casually rakes a nail along the bodywork of a red Toyota.

They stroll across the wasteland with its blooming crop of shopping trolleys and rotting carpets.

“Target practice” announces the leader, a wiry lad of about fourteen. He nods towards the row of small windows at the back of a vast grey hangar. Protocol grants him the first shot. Bullseye. Then, a fusillade of stones triggers a symphony of shattered glass.

A baby-faced lad produces a bottle, stuffed with oily rags. Instinctively, the others form a protective circle around him. A lighter is produced and applied. The leader thrusts the bottle towards Paul, the smallest lad in the group. His initiation. Paul grasps the bottle in his right hand, then hurls it with all his strength. It sails upwards, clips the edge of the window frame and explodes in a ball of flames. Shards of glass cascade to the ground. The lad turns for approval and finds himself suddenly alone, two policemen lumbering across the wasteland towards him.

Paul sees the policeman’s mouth working angrily, recognises the shapes of ‘fire’ and ‘stupid.’ The mouth is asking questions, revealing metal fillings, a bubble of saliva at one corner. Paul presses his right index and middle fingers to his ear. “Deaf” he says. “Deaf.”

At the police station they leave him sitting on a bench against a stained grey wall. He wants to do a pee and tries making the sign for toilet but they just ignore him. Paul shuts his eyes. Later a tap on his shoulder. A thin woman with a ponytail introduces herself, fingerspelling L–A-U-R-A. She escorts him into a little room with a table, three chairs and a high window. The room smells of damp clothes and sweat. A policeman asks a question. Laura signs it to Paul. Laura repeats his answers. The policeman writes them down. On and on. Over and over.

What were you doing on the factory land? Paul’s hands scoop the air in little circles. “Playing” he signs.

Who were you with? His index finger moves up and down. “By myself.”

Did you know this was a serious offence? The blade of Laura’s right hand slices down in front of her face, her expression solemn. Paul shrugs. He’s feeling better now. He’s seen this on the telly. “Boring” he signs.

Laura fingerspells the word ‘c-a-u-t-i-o-n’ slowly then makes the sign for ‘warning.’

“Next time” she interprets, “next time will be big trouble.” A head comes around the door. Laura taps a double ‘m’ into her palm. “Your mam’s here.”

Mam’s face is a mask, no clues there. She still has her shop overall on and her hair’s a mess. She signs the paper at the desk and shakes Laura’s hand. At the door of the police station Paul turns and lifts his middle finger, mouthing clearly “fuck off.” His mother’s hand meets his cheek with a smarting slap.

The next day at school Paul’s a hero. The hearing lads gather round him and slap him on the back, give him the thumbs up sign of approval. He grins, basking in the attention. But at break time his deaf friend Kevin points at him and makes the sign for ‘thick.’ “You always trouble” he signs, then shakes his head and walks away.

At lunchtime, Paul piles his tray with pizza and mash, cake and custard. He doesn’t even try to follow the science lesson but English is OK for once – they’re watching a video about a teenage boy who keeps stealing from shops. There’s a scene in the police station. Paul turns to his support tutor and signs, “Real or pretend?”

“It’s a drama” she signs back. “A story. I’ve told you before.” When he asks for the third time she tells him to concentrate and to stop asking questions. When she looks away he draws his index finger across his throat. “Kill.”

At home Paul goes straight upstairs to play on his computer. He lies in wait for the zombies, then blasts them full in the face. The head count mounts.

When his sister Karen shakes his shoulder to tell him tea’s ready, he jumps. A hollow-eyed zombie ambushes him, killing him on the spot. “You stupid” he signs to Karen. “Me dead now. Your fault.”

“Piss off” she mouths.

The telly flickers through tea time. Mam and Karen don’t like having the subtitles on so he gives up trying to follow the soap. Next time he looks, men are digging frantically in a huge pile of bricks and rubble. They pull a blackened body out and lay it softly on the ground. A woman wails nearby. Then a couple with white teeth and evening clothes get out of a long sleek car. Cameras flash. A man in a studio mouths at the camera, pointing at numbers on a screen. A helicopter lands in a field. A family beam at each other over plates of pizza.

Paul can tell mam’s still angry with him about the police station. She shouted at him when they got home last night. She hadn’t needed to sign for him to understand. Her white face and twisted lips were enough. Then she sobbed and signed “Why Paul? Why?”

That night in bed images play across Paul’s mind – mam shouting, the woman spelling L-A-U-R-A on her fingers, the men laying the blackened body on the ground, the white smiles of the people getting out of the car, the policeman with the spittle at the corner of his mouth. The slack-jawed zombies. He shuts his eyes.