Holding On To Nothing by Cassandra Passarelli 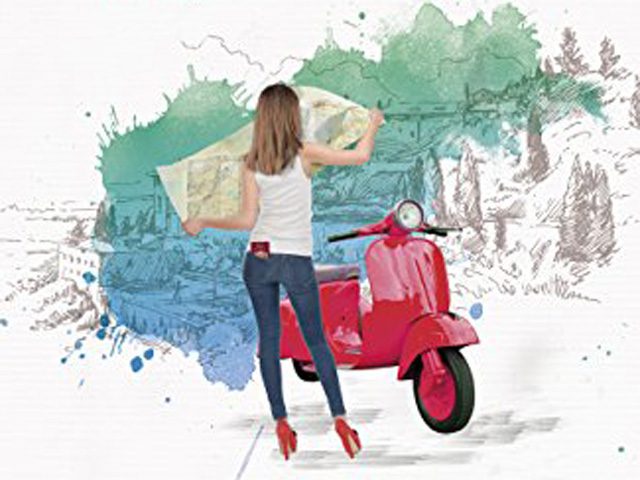 An extract from  In The Name Of Love by Louise Lee. This extract was originally published in The Mechanics’ Institute Review: Issue 12. The Mechanics’ Institute Review is an annual collection of fiction now open for submissions to all UK authors. While submissions are open, we will be posting some of favourite work from past collections. Stag was selected by Paola Moretti.

I am outstretched on a sunlounger, one arm gracefully above my head. My free hand holds aloft a copy of The Hitchhiker’s Guide to the Galaxy, officially the most brilliant book ever written. You should always have vast tracts of it memorised. Boys love it. If they don’t, they’re wrong.

Anne Frank’s diary. All prose with a religious bent – The Book of Mormon, for example; or the Qur’an. Self-help books. Men Are from Mars, Women Are from Venus.

The reasons why The Hitchhiker’s Guide to the Galaxy is an excellent precursor to flirting-proper:

Sci-fi addresses philosophical issues whilst engaging the mind in an abstract way, i.e., the way in which men deal with emotions best, i.e., not head-on. Add a comedic slant and they’re hooked, because laughter releases nervous energy in the exact same way as anger and fear – a giggle being a lovely adrenalin rush that peters out before it becomes a fight or flight situation.

So I know that when Freddie – his name is Freddie – spots my choice of book from his side of the infinity pool, he’ll experience a warm rush of nostalgia. He might recall his first read, or watching the repeats with his parents, or feeling failed by the film adaptation. Whichever, he’ll be luxuriating in another moment in time facilitated entirely by me.

That’s assuming he stops playing on his smartphone.

Sit up and stare at this place, Freddie. It’s not as if you holiday like this all the time.

The location is breathtaking. A six-star coastal development popular amongst the Italian glitterati – uber-cool pads and pretty stone houses nestle into a hillside that overlooks the Adriatic Sea. Sumptuous yachts bob within the pebble walls of a marina. Discreet designer shops, impeccable eateries. Acres of glass, marble, walnut and chrome. At night, halogen lighting invades every nook – from a distance Portopiccolo Sistiana twinkles as though Bulgari-encrusted.

Come on, Freddie, forget Candy Crush. Glance around you. Take in the backdrop. The people, they’re definitely worth a look. The woman sitting opposite you – especially her.

Like all Cancerians, I have a soupçon of telepathy. For a moment he stops playing on his phone, laughs at something his friend has said; a swift swig of Peroni and he resumes his game.

I’ve watched Freddie from afar for the past forty-eight hours. Today is the first time I’ve placed myself in plain view.

Freddie is one of an athletic trio. They’re all attractive, but most would single out the Stag first.

He plays football for the local team, Udinese Calcio, which is a big gig. In his spare time he enjoys standing up and admiring the Adriatic whilst enabling the widespread appreciation of his physique, tattoos and gladiatorial aura. It’s a shame perfection isn’t my bag – not his kind, anyway. Enzo’s too whittled, too mahogany. I imagine it would be like making love to a totem pole.

If I’m being truthful, Freddie’s not my type either – though his physique is consummate, he remains a little too “fun-sized”. Like a very pretty whippet. One who lacks the statuesqueness of his normal-sized cousin, the greyhound.

Freddie’s a footballer too – that’s how they met, he and Enzo, playing for a youth team in Bristol. Freddie now coaches disability football. He earns a month what Enzo earns a minute. Suffice to say, this jolly is c/o the Stag. Which is just as well. The sunbeds are extortionate – eighty euros for one day by the pool. Admittedly you get a changing hut with that. And a fluffy towel. And very cool Italian waiters.

Mine promptly arrives with a bowl of olives.

I confide in him. “I’d kill for a Lobster Fra Diavolo, but the boss is a tightwad.”

“Mine too.” He laughs just like a jazz musician I used to know. I feel a crushing sadness; it refuses to scram.

“Just a Peroni, grazie.” I force myself to concentrate on the third and final member of the stag party.

He’s more my type. Strawberry-blond curls, some meat on his muscles, freckled shoulders that glow an angry red in the lukewarm sun. He reads A Pair of Blue Eyes, by Thomas Hardy. The glasses that sit on the end of his broken nose are grandfatherly. He reminds me of an introspective polar bear, one who in an ideal world would give very sincere hugs. I don’t know what Jamie does for a living, but I decide to put A Pair of Blue Eyes on my reading list. Hardy is a wrist-slitting read; I’m intrigued as to why a boy would choose this book on a stag do.

I remind myself of the job in hand. Direct my attention back to Freddie – the one my boss has asked me to assess.

When I say assess, I mean entrap.

And when I say boss, I very much mean client – a client who is thrifty to a fault.

When I asked her for permission to hire a sunbed, she said: I’m a receptionist not an oligarch. Do they do half days?

My response was blunt: During cases of entrapment, never, ever do things by halves.

Because if you’re going to do something this extreme, go for broke. The matter will be settled once and for all, which, categorically, is the point of a honeytrap.

The waiter arrives with a Peroni. He also slides a small plate of Lobster Fra Diavolo onto the glass table beside me. He winks. His eyes are luminous green, his eyelashes black and dense as tarantula fur. I do an unexpected giggle.

Nothing tastes as good as free seafood. I eat it with relish. The fresh bucatini is exquisite. I can taste every last ingredient in the sauce – San Marzano tomatoes, brandy, kosher salt, the lobster pot’s rope mesh and timber frame. My stomach hums contentedly – it’s almost post-coital. Instinctively I reach for a Marlboro and take a nip of the beer, which tastes insipid, like soapy Prosecco, but the rules are thus:

Sup what your target is supping – it helps with the process of subconscious coupling, assuming he is aware of his surroundings and not glued to a phone app.

I feel a sudden sense of doom for Freddie. Whatever the outcome of this case, he is fucked, what with his girlfriend having such worrying baggage.

I style it out. Pretend I’m in a daydream; one where your eyes get progressively larger until you snap yourself out of it. I then do a carefree little yawn and, ensuring my sunglasses are squarely on my nose, I swap my cigarette for The Hitchhiker’s Guide to the Galaxy.

Operation Freddie Butcher is now off the ground.

I switch to peripheral vision. Mine is astonishing. Freddie does a double take, followed by a series of manly flexion stretches and concluded by a thoughtful gulp of Peroni. He, like me, retrieves his sunglasses from the side table, positions them carefully on his ears and sits back in the sunlounger.

The difference between us? My sunglasses record in colour and have a memory card the size of a lentil.

“Bingo,” I mumble into my book, because look how he’s repositioned himself, assumed the pose of spectator. His legs straddle the chair. Subconsciously he introduces his manhood.

This is how I encourage him:

Between you and me, there are many procedures I’d have had done were I less concerned about dying under the anaesthetic. But we’re not talking about me. We’re talking about this job. Perfection is beside the point – you need simply to be so sexually charged you crackle like an electricity pylon. An Ursula Andress bikini will help here. Go for one in a peachy colour to replicate the tones of pubescent labia. It suggests youth and the promise of propagation. Men don’t realise it, but they are innately drawn to the connotations of the colour peach.

A final note before I wrap this shift up.

There’s a very strict chronology to a honeytrap: Two Bumps and The Money Shot. This afternoon Freddie will not get a whiff of interest from me – this allows him to believe that it’s fine to include me in his fantasies, because nothing will ever happen.

At 2.45 p.m., I wrap myself in an apricot kaftan, pack my belongings into an Armani tote and leave the pool area.

With varying degrees of interest, all three men now watch me. When I walk past them, I kick over Freddie’s Peroni.

“I’m a klutz,” I apologise, briefly touching Freddie’s shoulder. “I’ll get you another.”

Jamie, on the other hand, watches me solidly over the top of his grandpa specs.

Rigidly, I smile at Freddie. “I insist.” Then I leave him and his friends to the rest of their afternoon, on my way out, asking the waiter to send over a fresh drink.

“Shall I put it on the tab?” He winks again. It’s such a winning wink; however, now I stand beside him, I see he’s two inches smaller than me, which is a crying shame.

“You must really hate your boss,” I say, smiling.

“Ah.” I get it. Father-son relationships are thorny. The time-worn lion. His restless progeny.

I nod at Freddie. “The football lot over there. Where do they go at night?”

“Drinks and food here between seven and ten, then into town.”

This tallies with the information provided by the client.

“Shall I get them all a drink?” he asks.

By the time Freddie receives his Peroni, I’ll be long gone. Yet every soapy swig will leave the aftertaste of me.

And that’s that. Bump #1 is complete.

It’s a ten-minute walk to my bike, which is attached to railings just outside the resort walls. My civvies are in a carrier bag tied to its handlebars. Converse, cut-downs and a T-shirt. I put them on over my soggy bikini, tie the beach bag around my shoulders, push the bike quickly into the road and do a running mount.

Damp hair blowing in the wind, I cycle home furiously. It’s normally an hour’s ride to Ronchi dei Legionari. Today I do it in fifty minutes flat. Because I’m late for a phone call. A biggie. It’s a conversation I have every Friday afternoon and under no circumstances can I miss it.

Louise Lee undertook a MA in Creative Writing at Birkbeck, and has had work commissioned by the BBC, her first novel, A Girl Called Love, was the first in the Florence Love series which follows the life of an irreverent, thoroughly ‘modern’ PI who specialises in entrapment. In The Name of Love is out in January 2017. If Louise’s mum is reading this, the books are in no way based on her true experiences. Honest.