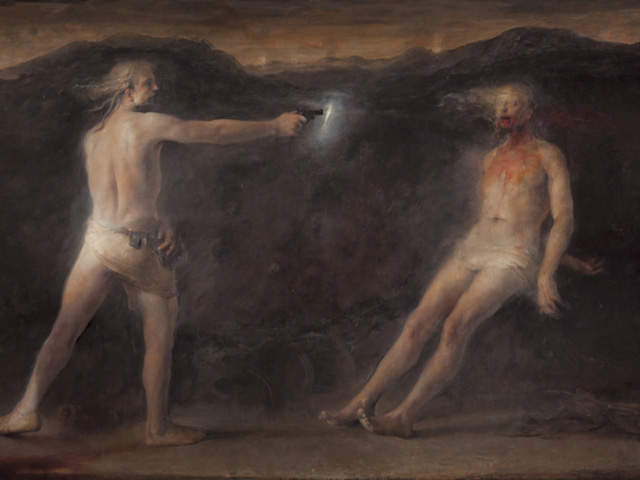 The Murder of Andreas Baader by Steve Finbow

Falling through the air behind the three men, the body of a younger man, early twenties maybe, no older than thirty, left leg amputated, stream of arterial blood splashing the sky, a dark red vapour trail. His eyelids flutter in the down draft. Hair, strawberry blond, slick to the head. Abdomen sliced open bearing the baubled fruit of his organ tree.

On the other side, a fat man, bare midriff, belly protruding over gold baggy trousers, watches a thin man dance holding a viper in his left hand, the thin man’s sparse beard flecked with spittle.

The man with the flaccid penis stands, walks towards the swaddled infants, lifts one in his hand, the other hand still cupping his testicles, takes a shovel from behind the rock where, until just now, he was sitting. Walks towards the kissing couple, stops, puts the piglet-sized baby on the ground, the bandages stained with the rust-coloured earth, begins to dig a hole. The untouched baby whimpers. The infant by the side of the ever-growing hole remains silent.

In the background, rocks twist and entwine, a city – moon-hued – barely visible on the horizon. A minaret, a spire, a dome. Behind a rock, three naked women squat, haunches trembling, blonde hair blowing in the warm breeze, their muslin undergarments draped on their broad thighs, hot jets of shit flowing from their anuses into a small stream.

Then, hurriedly on to the scene, come the set makers, forcing the kissing couple off stage, hammering, sawing, gluing, drilling, painting. A room in which five men enact an event of violence. A man in a red shirt keeps watch. A man in a grey suit falls to the floor. A man in a workshirt grips an arm. A man in a raincoat fires a gun. A man in white underpants dies. The corridor light illuminates the scene. The digging continues. The set is struck.

A man leaves his wife’s bed carrying a hunting rifle. A baby asleep in a cradle on the floor. The man stops digging. The baby has grown in size but has not aged. It is now the size of a infant before the rock remains the same. It is the size of a brick.

The three women stop their evacuations. Wipe themselves with their muslin undergarments. They take clothes from behind the rock. The first wears a gossamer gown, hair flowing, in her right hand she holds a willow switch. The second wears a cotton dress, between her hands she holds a shepherd’s crook. The third wears a robe of coarse sacking, a hood, in her left hand she holds a leather riding crop.

A boat sails along the stream behind the rock. In it, an old man imitates a cloud, a middle-age man attempts to tie a string around a viper’s head, a young man puckers his lips and blows through the eye sockets of a tiny skull. The three men and the three women look around attracted by the sound, a low whistle. They all come together in the centre, around the rock – the three men, the three women, the kissing couple, the fat man, the thin man. The young man continues to fall from the sky, bloody fingerprints smearing the air, the still-life of his organs muted green and red. The pulsing reverberation of the iron bar, the echo of the gunshot, the sound of nails scraping earth, the maggots’ dreadful inching.

The three men face west, the three women stand behind them, the men stretch their right arms behind their backs, each of the three women – whom we can now see are blind – take each of the men’s right hands in their right hands and the men move forward shuffling, hopping, stumbling. The women’s eyes pale, almost molten, ink in milk. The kissing couple come together again, muscles bulging, tendons straining, teeth against teeth, eyes closed, oblivious. The rusting earth trembles, a hand reaches out, a scythe held by the thin man slices through flesh and bone. The fat man doubles over with laughter. The maggots become a swarm of flies that envelope the boat. The old man closes his mouth. The middle-age man closes his eyes. The young man runs his tongue over the skull’s creamy teeth.

The brick-size baby closes its eyes. The hole before it grows larger, the edge breaking pie-like, the crust wrinkling, folding back, the sore earth weeping. The three men and the three women stop, sit on the ground, their backs straight. They face west. Mouths open. A low tone gathering in volume. Heads raised to the sky. Arms folded. Smoke issuing from the far city – its minarets, spires, and domes crumbling, twisted metal, charred wood, flaking plaster – rolls across the landscape. The boat disappears. The river dries up, a stinking craquelure of shit and dead fish.

The young man falls from the sky. Torso rippled with gravity. The kissing couple pull apart. Stare at each other. The almost-woman’s eyes bulging, the almost-man’s mouth a rictus of hate. The three men and three women stare at the sky now a dark brown, a burned caramel. The no-longer kissing couple take out their false teeth, place them either side of the brick-sized baby. The pink plastic resin of the gums gleams, the teeth slick and sparkling. The almost-woman reaches down, unscrews a prosthetic penis. The almost-man reaches down, unfastens an artificial vulva. The brick-sized baby screams once and then is quiet. The three men and the three women close their mouths. The young man falls to the ground.

The set builders return. The three men and the three women pair off, the three women kneeling in the earth, their dresses pulled up over their ample shit-stained buttocks. The kissing couple lift the brick-sized baby. The almost-man tugs east. The almost-woman tugs west. The bandages unravel. The brick-sized baby’s mouth a perfect O. Its eyes stitched shut. Its ears stoppered with tiny waxen corks. The three men hold their yellow, pink, and plum-blue penises in hands covered in lesions, knuckle bones protruding through split skin. The almost-man anchors his left leg in the earth, pulls. The almost-woman plants her right leg in the dirt, pulls back. The young man’s body dissolves, forming a new stream.

The light from the corridor illuminates the cell. A room in which five men enact a scene of violence. A mattress with striped ticking falls to the floor. A man in uniform on his back, arm raised, gun silent. A man with red stubble on his chin, grits his teeth, bloodies his gums. A man in a shirt and tie, eyes veiled by shadow, fires a gun. A man in a white shirt and stained underpants dies.

Steve Finbow’s fiction includes Balzac of the Badlands (Future Fiction London, 2009), Tougher Than Anything in the Animal Kingdom (Grievous Jones, 2011), Nothing Matters (Snubnose Press, 2012) and Down Among the Dead (Number Thirteen Press, 2014). His biography of Allen Ginsberg was published by Reaktion in 2011. His other works include Grave Desire: A Cultural History of Necrophilia (Zero Books, 2014) and Notes from the Sick Room (Repeater Books, 2017). Death-Mort-Tod will be published in 2018.