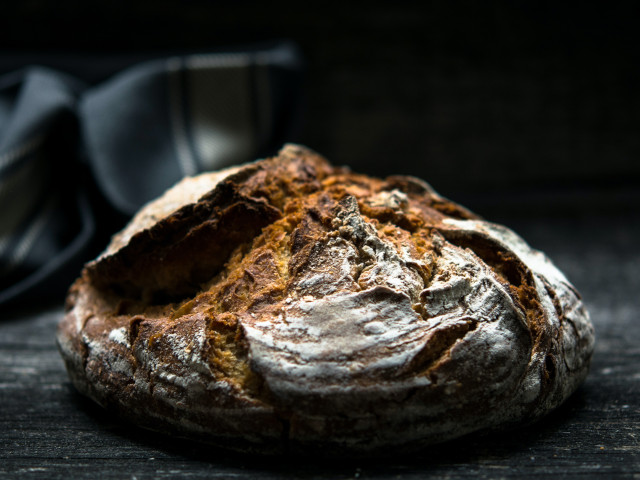 The Lesson of the Loaf by Julia Bell

What touches you is what you touch, says Margret Atwood, gnomically, in her poem ‘Nothing’, a line that I have repeated in my head like a koan all my life. Now I’m confined to the house, and what I touch has taken on such immense significance, like many others, I’ve been finally trying to learn how to make my own bread.

Flour, water, leaven, salt. Four ingredients. The simplest of foods, taken for granted over a lifetime of mediocre sandwich lunches and tasteless paninis. I complain about the state of British bread to anyone who will listen, but never make the time to do anything about it.  Armed now with a litany of YouTube videos, websites, Elizabeth David’s English Bread and Yeast Cookery, and Chad Robertson’s Tartine Bread,  I have all the instructions I need to be able to master this most basic of human skills. How hard can it be?

Growing up in the vicarage there were so many sermons on bread. In the Bible it’s mentioned 492 times; in the Quran and the Torah also, bread both actual and metaphoric appears, representing provision, home, community, feasting, salvation and crucially, survival. The bread of the last supper, the five loaves, the unleavened bread in Exodus, the Lord’s Prayer. Give us this day, our daily bread. In a religious house everything can be a metaphor – but as Elizabeth David points out in her exhaustive study of the history of bread, baking is also part of our human dreamtime. She excavates recipes from Medieval manuscripts, explains the workings of the Roman bread ovens at Herculaneum, and delivers a masterclass on different kinds of grain.

Since lockdown, I’ve really had to think about food. There are shortages and it no longer seems paranoid to ask questions about where our food comes from, I have a creeping concern about the security of our food supply. If a Pandemic can stop us in our tracks, what about a mass drought? Or even more flooding? On a primal level being able to bake bread means I won’t starve. It’s not by accident that my Instagram feed is suddenly full of homemade loaves. No longer just the preserve of hipster perfectionists, we’re all at it now, in some vital, psychic way, our survival depends on it. Bread means we can live.

The first task is to get the starter going. Mixing flour and water and encouraging it to ferment with the ambient yeast to make a leaven that will aerate the dough. I source a huge catering bag of Indian Chakki Atta flour from the Turkish shop, it’s not exactly ideal, though I don’t know that yet, but it’s all they have, and it cost a tenner, so I’m loathe to chuck it. Then, trying to weigh amounts for the starter, I realise my scales are broken, so I use American cups which are much less accurate, half water, half flour. For a few days, nothing much happens. I’m baffled by the requirement to keep throwing away half of the starter before refreshing it, it seems wasteful.  I make flatbread with the mixture instead of throwing it away, but it tastes like a revoltingly oily slab of undercooked dough. Then I lose track of when I’ve fed it. It sits on my kitchen counter in a jug, a wet uninspiring mess.

I find a video made by the British Museum of an Italian baker trying to recreate the loaf of bread found in the ruins of Pompeii. A perfectly carbonised platter of bread, scored into portions with the bakers stamp on one of the triangles. I think about the baker, frozen in place where he fell, overcome by the heat and the fumes, and think of how that reminds me of now. All of us in some kind of psychological Pompeii, frozen where we landed, no time to prepare. It overtook us as a phenomenon: the sudden shadow of mass death.

Some days pass, it’s hard to tell which, it could be the week or the weekend, or even a whole week. At the Turkish shop I find another bag of flour, Romanian this time, with no English on the packaging, but from the illustration of a loaf, I’m guessing it’s white flour. Where does this stuff even come from? Along with the Chakki Atta it has travelled so impossibly far to end up in my kitchen. And made from what grain? How much pesticide was sprayed on it? These bags, are, surely, a leftover of Before, relics of a complacent, globalised food supply. In an age of the Pandemic, how much can we depend on being able to source what we need?

‘What is choice and who makes it?’ begins one of the sections in Elizabeth David’s book. Even in the 1970s the politics of bread production bothered her, and if it was bad then it’s even worse now; in our max-ed out world of convenience, how much crap are we pouring into our bodies? Good bread used to be local, specific to the grain and the soil and hands of the people that made it: as Chad Robertson points out, bread is a ‘philosophy of ingredients and how they interact.’ Our industrialised production chain is making us ill – high levels of food intolerance and diabetes are directly connected to the zombie foods we are sold, full of life-limiting levels of sugar and chemicals; our farming practises are precarious and degrading to the landscape; our sourcing too complex and greedy with air miles. These are realities, just as the possibility of a pandemic was a reality. And if we understand anything about the environment, we know too that the two are related. We have built our empire on an eggshell. Not for the first time, I stare at the puddle of wet flour in my jug and wonder what will become of us.

A few days later, after giving my starter some flour and water every day and more-or-less sticking to the instructions, the contents of the jug have visibly changed to something which looks more like a mousse. It smells good. Sour, yeasty, like the descriptions. The yeast on the Indian grain, the yeast on my hands, and the yeast in the air of my Tottenham kitchen, has multiplied into this multicultural ferment, which seems, to my untrained eye, to be alive.

I decide to try and bake with it, following the simplest recipe I can find. At this point I don’t yet realise that the flour I’m using is too heavy for bread. My research has not yet grappled with the complexities of flour, in spite of my extensive reading. Also, my broken scales mean I can’t really weigh anything properly. So from the beginning, even as I add too much water to the flour, I realise immediately, that I am in error.

What is it about being unable to follow instructions? I notice it in my students sometimes who will ask a question just after I’ve answered it, or who will forget many times – many, many times – the instructions for assessment. I notice it in myself – the comfort of watching someone in a YouTube video executing a perfect loaf, over and over, only to get to the process myself and realise I have only absorbed a few of the details. And then there is my exceptionalism, especially when following a recipe: oh well, I didn’t do it the way they said, but I’m sure it will turn out alright for me. Let’s see what happens.

I tip it out the contents of the bowl onto a floured counter, but the dough is like string, it sticks to my fingers in a way that is cloying and makes me want, immediately to wash them. I try adding more flour, then kneading it but I just seem to be pressing the mass further into the countertop. Frustrated, I scrape it up with a knife and put it back in the bowl, fold it over a few times and cover it with a tea towel, pace around a bit then take the tea towel off and stir it vigorously with a spatula so I don’t have to touch it. I’m tempted to just jack it all in the bin, but the recipe says let it rest. Coming back to it a few hours later, the mound is wet and wobbly, but it has increased in size a bit. There is life in there. I leave it in the fridge overnight. Next morning I bake it. A round splat of heavy dough that I throw in the Dutch oven, by this point just to see what will happen.

What emerges thirty five minutes later is a dark brick, opening it up, it is a thick inside which is still wet, but cooked around the edges where it is more crispy and aerated, something was beginning to work. I cut these pieces off and eat them, they taste faintly of actual sourdough, which is something.

I keep trying, and each time the loaves get a little better, more structured, more like bread. Not just any bread, but my bread, made with my leaven, with my uneven, wayward cooking hand. I am beginning to understand the process, to see it as a kind of cross between gardening and cooking – to get it right, you have to cultivate an environment that will host a community of yeast that will live long enough to aerate the dough. Once the dough cooks, the heat kills all the yeast, but not before one last frenzy of activity – all those holes in the dough the last traces of life. A slice is the imprint of all of that activity, the frozen moment when all life stops. I can suddenly see the point. Not that I have any desire to be an expert, only that I have a new found respect for the decisive moment of transformation, when the heat finally obliterates the rise.