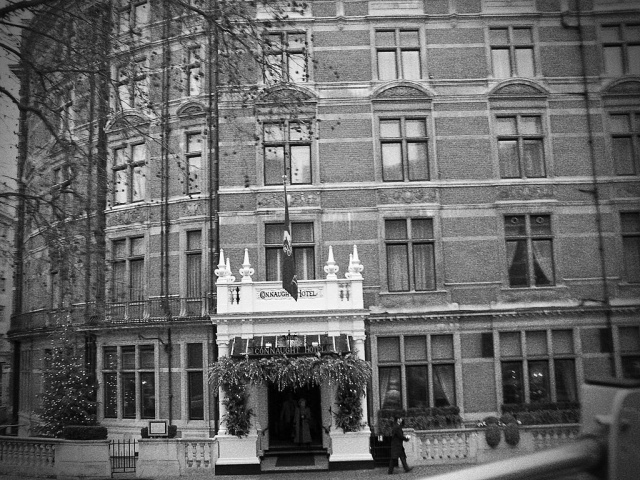 He comes back and is put up in the Connaught for free, a suite, not just a room, with a bedroom and living room, a bathroom, finely upholstered sofas and antique tables, a walk-in wardrobe. A bar. A counter. A hand marked with age spots, fingers that twitch. That hand reaching for the thick crystal glass of brown liquid. He stands behind the bar, heavy but spinning. There are open cans of coke across the dark wood lacquer. Some half full, some empty. He paces the grand room, with drink in hand, distracted. London’s distant traffic hum is behind glass – floor to ceiling windows that don’t open – muted masses in Hyde Park, in and around the effervescent fountain. In here there are mouldings that crawl up the walls and along the ceiling like a vine. A lush carpet is spongy beneath bare feet that pad and pad. The curtains are sometimes closed. Light is mellow through a swash of white gauze, detail blurred. Guests prefer the air con, the constant isolated drone. A throat-tickling chill both cold and stuffy. His bed is made for a king. Its covers neatly tucked by a maid who visited that morning, and a small note on the pillow saying: Enjoy. A chocolate.

His daughter kneels on the bed and unwraps the chocolate. ‘Can I eat it?’ she asks and, in her mouth, it melts to nothing.

He has been here for a week and every day she has come to him. Mainly to take him out, to walk with her, to break the cycle of pacing and drinking, drinking and pacing, and dreaming of money. This morning is the same. The room is stuffed into the corners with splinters and daggers. ‘We’re going out,’ she says. ‘The park is out there. We don’t have to go far.’

Today is the day that the Russians are coming.

She isn’t sure he wants her there, but this is her father. She won’t leave until they’re gone.

Her father is pale. Her father is overweight. His face is the colour of rain-ready clouds. He is puffy and swollen. He limps when he walks. He has a tick: flicking his fingers as he paces up and down. He stops to take a breath. He is visiting from his home by the sea, where he lives alone now, in another country, which from here feels like a bleached-out dream.

In the park, they walk to the fountains. He talks of money and houses and being a millionaire.

‘This is it,’ he says. ‘I’ve been waiting all this time. But now it’s happening.’ He reaches for her hand, squeezes it. ‘It’s finally real.’

It’s real? She looks at him.

They walk to the fountains where there are children playing. They are chasing pigeons. People stand and sit around the circular marble wall that surrounds the water and take photos. The sky is overcast, and it is cold. He wants to stop. He wants to sit down but she encourages him to continue.

‘You are good to me,’ he says, holding on to her for balance.

‘You can’t just sit in the hotel room all day,’ she says. ‘You’ll drive yourself crazy.’

‘They keep telling me they’ll be here.’

The Russians have paid for the suite at the Connaught. That’s what he’s telling her. It’s costing thousands of pounds for the week. They paid for his flight, too, First Class. ‘They know I am important,’ he says with pomp and pride, that same pretence he’s always clung on to.

‘They are paying for your room at the Connaught, in order to give you money?’

He died. An accident. His family too.

The cousin I never knew I had.

They walk around the fountain, one step in front of the other, as she links her arm in his. She talks about her work and her fiancé and their upcoming wedding, but he keeps turning back to money. ‘It’s different this time,’ he says. ‘You will never have to ask your dad for anything.’ They walk around the fountain, its circular marble wall, and he repeats the words over. ‘I always knew it would come. Your father will be rich. I won’t have to work again. All those fucking clients. Those fucking editors and agents with their promises.’ He laughs that childish laugh. ‘Fuck ’em.’ She feels light on her feet, weak at his words. The sky fading to nothing. She leans against him to test his substance, and the water’s spray stings her eyes.

‘I’ll give you money, my darling girl. So much you won’t know what to do with it.’ But he stumbles as he says it, as if, momentarily, for the first time even, he questions his exuberance. She grabs hold of him and takes his weight. He coughs, catches his breath. ‘My legs,’ he mutters. ‘They keep on letting me down.’

She believed him once. When she was younger, he told her he knew someone who owned the crown property on Regent’s Park. He drove her around the inner circle and pointed out the grand white stucco buildings. ‘He’s given me one of his houses,’ he said. ‘Just handed it to me,’ he said. ‘As if it were a biscuit.’

She believed him then because she wanted to. It meant he might stay. He might have a home that he liked enough to want to stay longer than a year or two. Her father would stay in this country only a short distance from where she lived with her brother and their mum. But within the year he’d moved away.

She’s grown so accustomed to his stories that his words wash through her like water. ‘Millionaire,’ ‘Really?’ A smile and a nod. ‘That’s nice, daddy.’ They continue on, stepping to time. They walk the circle around the fountain and the air thickens. The calming patter of water on stone mutes his promises.

She holds onto him to keep him afloat and the colours change. The sun passes through cloud to make a sudden rainbow spectrum. His words are broken by the light that cuts right through them. ‘Make. A Millionaire. Have. To. Think. Money. Ever.’ She smells sweet vanilla on the air and hears the soft breeze pass her ears. It whispers, Out Here.

She wonders, fleetingly, what it is he wants. He and his second wife lived together in their beautiful Redwood house. Two long-haired Oriental cats who stretched out on mahogany furniture. A glass table, and a bookshelf that shone. Liquid sweetness in the Californian sun. But then they had a row, and he smashed his hand on the glass and the table broke. His wife left. He discovered drinking.

‘Are you not suspicious?’ she asks as they sit on a bench. ‘Do you not think they might be lying?’

Was he so desperate? So convinced that somehow he was owed this stroke of luck? This gift from above? A message appearing in his inbox telling him he was the one. How could he fall for it? Such inconceivable claims, and misspelt words. How easy it is to lie, how difficult, really, to believe it. But of course, he’d been waiting for this for years; after all, he is special. He will be a millionaire for doing absolutely nothing.

They go back to the hotel because he is anxious. This is the day. They go back to his room and he changes his shirt. The walk has made him sweat. He pours himself another drink. ‘You can go now,’ he says. ‘You’ve been so sweet, my daughter. But you can leave me alone now.’ But she won’t leave. She sits tight on the sofa. There is a card on the table. It has a name on it. It is a Russian name. She doesn’t trust these people, so she pockets it.

She keeps her back to him as he pads across the room. There has been talk of money, money that he needs to give to them in order to be given something back. Lawyer’s fees, administration. ‘Not much,’ he says.

She is aware of him at the safe door, punching the keys. The door opening. She turns to see him take the cash out of the safe. He stuffs the money – wads of it – into a plastic bag. Her heart is beating fast now. Her throat stripped by panic.

‘I’m going with you,’ she says, and only half stands up.

‘You’re not,’ he says and puts on his coat. She bends the card in her pocket.

He takes the money and leaves the room. A blast of air escapes just before he closes the door. She is left there beneath the busy ceiling, sitting on the upholstered chair. Between the walls that close, the hush of the thick carpet and the heavy drape. The light from the park is dulled when it hits the glass, dulled when it swims into the corners of that godforsaken room. He walks down the stairs with dignity, telling himself to act with care; telling himself the story that got twisted somewhere in its telling. He forces a smile when he sees them, these men, who stand and sit in the lobby, bright in their promise, and dark in their silk attire. His heart plummets. He is sweating when he passes over the money. He doesn’t look back to see her standing at the top of the winding stair. She sees his head drop when they take it from him, and she is struck suddenly by the darkness. The plush hush. And how old he appears in shame. She thinks of his journey home to his house by the sea, alone, and his palms empty. She wonders what it will feel like to be him.

Lily Dunn is a published author of fiction and creative nonfiction, teacher and PhD student at Birkbeck. She is writing a hybrid memoir about the legacy of her father’s various addictions, and has had essays published by Granta, Litro, the Real Story and Aeon. She is a co-founder of London Lit Lab, and a lecturer at Bath Spa University. She is leading a crowdfunding campaign with Unbound to publish an anthology of recovery stories by people who have suffered from addiction and mental illness. You can pledge for a copy here: https://unbound.com/books/recovery/