Weekend in the Cairngorms by Odette Brady 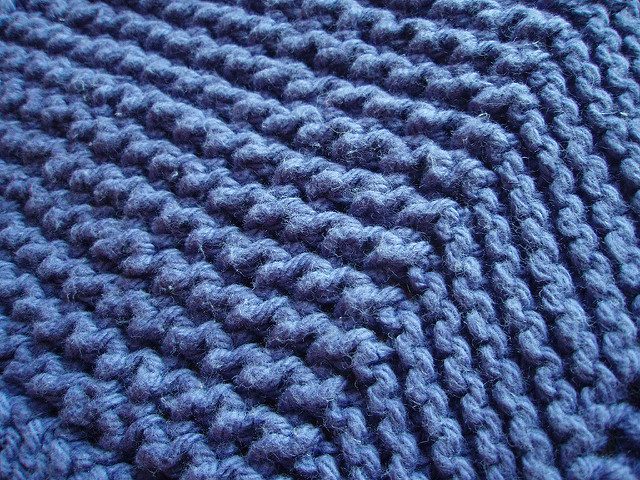 All the way from Oxford Street, she’d lallygagged, dreaming about what she might knit. She considered a scarf or a blanket big enough to wrap around and around and around herself. A cardigan, however, a cardigan, she could knit so long it hugged her calves; with sleeves that drowned her arms so she had to push the sleeves up to her elbows, as she always did anyway.

She twisted the six millimetre needles on to the eighty centimetre long cable and cast on one hundred and forty stitches. The wool was like her, deeply blue and very messy. It was covered with knots and tags in all the shades of the rainbow; as if it had been allowed to roll on the factory floor to sweep up all the discarded fragments of the other wools.

She had no pattern. Her troubles with previous attempts was her distaste for patterns. She did not have the patience for and could not maintain patterns. She kept changing the stitches and the longer the attempts got, the more peculiar they’d looked. With this cardigan she would disregard pattern right from the beginning. She planned to drop stitches and leave holes. Little fuck ups from the get go.

There. The first row was done and now the second. She knitted ten stitches. She knitted another and then wrapped the yarn around the needle twice. She repeated this three times and knitted the rest of the row. When she got to the wrapped yarn again, she dropped it. There. The first holes. Perfect.

Her hands, continued to knit as she looked up to check her surroundings. People were sparse in the café where she sat. Two employees and a little old lady reading a broadsheet. She could spy five or six people over the way in the Cooking and Travel sections. Right in the middle of European Cities, a woman was sitting at the grand piano with a boy pecking at the keys. She discerned the notes of Für Elise. The boy was butchering it beautifully. The tempo dragging on like a train hellbent on freedom. The old woman flipped a page slowly, the paper parting with a pucker.

She knitted another row and poured herself a cup from the teapot in front of her. It’d been brewing for at least ten minutes. Nearly black, steam wafting to her nose, she took a sip, grateful for its bitterness. She thought of the last Pain au Chocolat on the pastry slab on the counter. She’d wanted to buy it. She’d thought: The Pain au Chocolat and a pot of Peppermint tea please. She’d run over the pronunciation of Pain au Chocolat in her head. She’d nailed it.

It was the only string of French words she could say that didn’t make her sound like some kind of Françaisophile. At the register, she’d said: a pot of Peppermint tea please; and the lady didn’t ask anything else, and the Pain au Chocolat had been abandoned.

There was a whole speech she had planned around her pronunciation of Pain au Chocolat. Someone would say: Oh do you speak French? You say that so beautifully! And she would say: Oui. Oui. I’m practically a Parisian don’t you know? I spent five years studying French and I can say: Pain au Chocolat. Où est la piscine à La Rochelle? Je m’appelle Simone. Comment t’appelle tu? Comment ca va? Ca va, et tu? Ca va. They’ve got a portrait of me hanging in Marseille and underneath it says: Perfect Pronunciation of Pain au Chocolat.

She spread the project across her thighs and shoulders. She hoped it was wide enough. If it wasn’t, she supposed she could always knit a second or third piece and stitch them together. It seemed enough and there was a little stretch to it. Maybe it would fit. She drained the cup and picked up her needles again. Knit. Knit. Knit. Knit. She slipped three stitches. She wasn’t sure what it would do, or how it would look, she did it anyway.

Looking up again, she spied a couple browsing Italian Cuisine. Neither of them looked like they’d have the patience to pull and knead dough. And sure enough, the woman loudly exclaimed that there were recipe books for bread machines and there was one for the very model they owned. She wanted to shout: Save your money! Buy some yeast, flour, sugar, whack it together, splash a little oil over it, let it sit for the night in the oven, with the oven off, punch and slap it a little in the morning, put it in a pan, an oiled pan and bake it for an hour. There. Now give me the twenty quid you were going to waste.

The boy at the piano was slowly decreasing the gaps between his notes. The woman beside him was teasingly playing bursts of Waltzing Matilda. The two would collapse in giggles against each other and then the boy would compose himself and begin again.

Chatter drifted to her from the world maps. Two teenage girls holding a scratch and sniff map between them. Apparently one had kissed a boy called Phillip who had visited every single continent. Yes, even Antartica. His dad is so totally loaded and he’d taken the whole family on a whaling trip. Of course, he didn’t actually hurt any whales. He loves all animals. He’s vegetarian. But he only eats dairy cos his mom doesn’t know how to cook anything without cheese. She even puts cheese in apple tarts. No, I swear to God, she does.

There was a time when she’d been like that too. When nothing seemed more interesting than gabbing about boys and wistfully looking at maps. She’d once memorised the major motorways in Belgium. No particular reason.

She poured herself a second cup. It was a little colder, stronger too. She wondered how many cups the teapot held. She drained and poured another cup and watched the dregs drip. When the cardigan was big enough to babysit itself, she’d get up and get a fresh pot. For now, she picked it up and began knitting again.

Wrapping the yarn twice randomly and dropping it in the following row, and knitting all the stitches in between, she constructed the cardigan. Speed knitting, they called it. She’d been knitting years before she hit puberty. She could hold conversations, walk, watch movies, solve puzzles, read and sing in tune while knitting. Once she’d taught her hands the pattern, she could altogether abandon looking down.

She could knit inches in the time it took beginners to cast on a few stitches. Knit. Knit. Knit. Knit. Knit. Her needles rarely clicked together anymore. She hated the clang. It was such an annoying noise. With her left thumb holding the next stitch, she found the needle’s way in, guided it in and wrapped the yarn with her right index finger and pulled it through. Clockwork. She rarely dropped stitches accidentally and usually felt immediately when she did. She couldn’t describe it. It was just a feeling that something was not quite right. It was as if she and wool were tied together.

Even now, she’d been dreaming and knitting. In her mind she was in Edinburgh last summer. She’d spent August flyering in three hour shifts for pennies. She’d knitted four scarves. Of course, she hadn’t taken her own wool and needles because no one takes such luxuries to The Fringe but she’d found a little haberdashery with reasonable prices. The first scarf had taken her three days stomping up down Pleasance Hill. She couldn’t remember exactly what was stressing her then, you can never tell these days, but she’d been stressed. So she’d knitted scarves. One after the other. She’d found homes for three of them. The fourth had an owner too but was being fostered by her wardrobe.

She dreamed often of Van Khokh. She dreamed about building a time machine and spending his last days with him. They’d lay in a field and watch the clouds. Talking in French and Dutch and English. Of course, if she’d had time to perfect the theory of time travel and build a working time machine, she’d had time to learn French properly and learn the other half of Dutch she had not learned beneath Robin de Spin. She dreamed of saying: Vincent, wij zijn zwart en blauw maar wij zijn goede. Vincent, lieverd, we are so full of awful sadness but perhaps today we can swallow it and find some happiness. Just for today, schatje, let us be happy. Let us sing and dance, yes, here, in the middle of this field. Let us sing and dance. Perhaps, we’ll paint, perhaps, we’ll write. Let us not fuss, let us just be happy today.

And they would be. Because she always went back. Over and over, she went back. Vincent, Vincent, you must be happy. And he was. Over and over, he spent his last days happy, with this strange empty girl who skated between languages and made up poems on the spot; long rambling poems that did not rhyme but had rhythm; and told stories of islands far across the sea; and sang sad wailing songs with happy tunes.

The little boy was mastering Für Elise. It almost sounded recognisable to those who had heard it once long ago. She was clinging to the notes. Knit. Knit. Knit. Knit. She was grasping for anything to hold on to.

She wondered if he, he looked about six, would one day cling to the piano like she clung to knitting. If he would compose his own lullabies. If he would frivolously spend money on pianos and piano accessories and piano workshops. If he would attend piano groups for the severely depressed and be the best piano player amongst fans of piano music and people wanting to learn to play the piano and people seeking harmless forms of self medication. If one day, people would gawk and applaud and praise him as he played the same sad song over and over and over again.

Knit. Knit. Knit. Knit. Knit. She was going to finish this cardigan. Not today, even with her speed, she could not knit a cardigan in a day. She had only bought two balls of wool. She only bought two balls of wool so she would have to go out and buy more. She would have to leave the house again. A game of risk. She had a stash of wool at home. There was nothing to stop her frogging this cardigan when she got to the end of the second ball and excusing herself to choose a wool she had more metres of. But, for now, she was knitting a cardigan. One stitch after the other and wrapping the yarn over the needle and dropping it randomly to make holes.

Shaniqua Harris was born in Barbados and grew up traveling between Barbados and London. Her first short story Scarf was shortlisted for The Guardian and 4th Estate's BAME Prize in June 2016. She lives in London, and enjoys knitting and listening to showtunes. She is currently studying for her BA in Creative Writing at Birkbeck.