The concierge at the Principal Hotel was finished for the day. As he left he saw, for the first time, two men kiss at the bus stop. The shorter had to push himself up on tiptoe and in an instant the concierge thought of his first wife.

The third wife’s hair no longer stroked the top of her shoulder when she arched to refill their glasses. That’s what she was busy doing to herself—she was reducing! Of course. It had been a period of dissension.

Her kitchen was full of secrets bound tight in the silver crunch of tinfoil. What were the names of those things she enclosed in the plastic tub that used to hold the margarine? She refused to tell him, and the digital print of an olive tree, faded to pastel by sun, was no help.

Their guests welcomed the light-hearted tinkle of ice as the third wife told them of her occupations, numerous:

She ticked them off on outstretched fingers, a decided tap on ten tips. Mary wiped the sweat from her brow, smiling, until finally, the pastry suffered an incision. Everyone stopped breathing, hearts arrested!

Tonguing the tines of his fork, the man said, ‘The flour, you know, is organic.’

The third wife added that fortunately the tablecloth easily wiped clean. Crumbs of all kinds were assorted into gingham squares and tidily pigeonholed. That was no less an occupation of hers, you can be assured. ‘Men are men and women are women’.

There was some coughing too, intermittently, that the third wife ushered away with the cup of her palm.

‘I mean we had a really lovely time—’ Mary began, losing the sentence in the tangle of her cashmere scarf.

The third wife waved at the blinking red lights as they petered out into the darkness. The door asserted itself and slammed shut behind her. She imagined the house bursting promptly into flame, waiting until she had turned her back. As if to throw herself into the fire, she lunged and pushed her weight against the door. It popped open.

The hallway was cool, almost to a fault, now.

The third wife ran herself a bath and let him have the pleated cushion of duck egg blue. He listened to water storming from the taps and thought about Mary.

Even when leaning as far back as possible, the third wife’s breasts peeped from the clouded water. She was, truthfully, only sensuous in those moments. Even tomatoes, chopped between her fingers and blunted Damascus steel, lost their magnetism. But small miracles those hands performed! The shaving of clean white lines into the mudded skin of potatoes, pushing out their knots until they were a family of blind and washed-out tubers.

Pink and lightheaded with dreams, the third wife stepped onto the padded stepladder to crack open the window. Children called to each other beneath the streetlamps. She wished with an ache that she too had children. It was not until her foot met the carpet that she remembered she had. One child, James Hindberg, named for her first husband who was in turn the concierge at the Principal Hotel, and who, then, always took three sugars in his coffee.

The music the husband had selected—A Modern Jazz Symposium of Music and Poetry by Charles Mingus—played mutedly from a speaker in the downstairs room. In a review of the album, its cold and exacting author proclaimed:

DESPITE ITS TITLE, THIS ALBUM DOES NOT CONTAIN ANY POETRY. 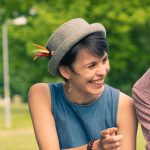 Melissa Wan is from Manchester by way of Hong Kong. She began writing for the stage and her story The Husband and the Wife Go to the Seaside was published in Seaside Special: Postcards from the Edge (2018), a collection of stories by Bluemoose Books. She is currently a student on the MA in Prose Fiction at UEA, where she is a recipient of the UEA Crowdfunded BAME Writers’ Scholarship.